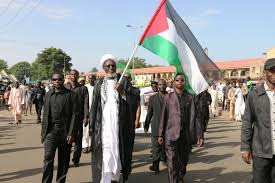 The Islamic Movement in Nigeria has received intelligence reports indicating that Nigerian Security agents have planned to carry out false flag operations unleashing mayhem in some unmentioned cities in the country, in an attempt to scuttle the marking of Qud’s Day celebration in the country. This annual event, the IMN had peacefully marked successively for the past three decades in solidarity with the suffering people of Palestine every last week of the Holy month of Ramadan.


Two years ago, the event held simultaneously in more than twenty towns and cities across Nigeria, but it was only in Zaria that soldiers under the command of Lt. Col. S.O. Okuh brutally attacked the peaceful protesters, killing 34 people, including three children of our Leader Sheikh Zakzaky. With the benefit of hindsight, that was only a dress rehearsal for the Zaria genocidal attack of December 2015, in which over a thousand members of the IMN were extra-judicially killed in cold blood.

For the benefit of doubts, we wish to reiterate to the public that IMN has been a peaceful entity from conception and has consistently employed peaceful means throughout its existence. That is not going to change, no matter the provocation. We therefore want the general public to know that any act of violence done in our name is not from us, and we by this hereby dissociate ourselves from it and denounce same.

The Nigerian constitution has guaranteed citizens the right to free assembly and peaceful protest. This we will employ as we have always done in all our gatherings and processions. We will mark the Annual international Qud’s Day as has been the tradition just as it will be marked simultaneously all over the World. Nigeria cannot be an exception. We will bring out the name of Nigeria to take its rightful place among the comity of Nations in this regard.