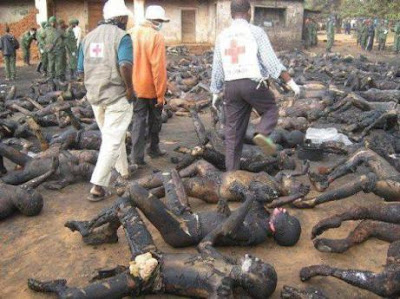 Borrowing from the investigative and statistical findings of Open Doors and its Chief Executive Officer, Lisa Pearce, Christians are facing State coordinated and State-abetted persecution in Nigeria. The persecution of Christians, according to the respected international anti Christian persecution watchdog, is carried out by three groups: Islamist Boko Haram terror group, Muslim Fulani herdsmen and the Muslim religious fanatics oiled by political elite as well as top politico-security appointees. In other words, while Christian killings are perpetrated by the trio of terrorist Fulani Janjaweed and Boko Haram groups and government security agents; the present Federal Government under Gen Muhammadu Buhari is deepening and consolidating its pursuit of radical and annihilative policy of State Jihadism; thereby encouraging reprisal radicalization and undermining the unity, Constitution and secularity of the Federal Republic of Nigeria.


According to the recent report of Open Doors, the attack against Christians has become rampant in the North and in 2015 alone; there were 4,028 Christian killings and 198 attacks on churches, which nearly doubled those of the previous year. The Open Doors also stated in its report that 1.3 million Christians had fled their homes to safer places to avoid being hacked to death by religious fanatics and that between 2009 and 2014; a period of five years, 11,500 Christians were killed and 13,000 churches destroyed in Boko Haram insurgency. At the heat of the politically oiled Boko Haram terror, Christian communities in the Northeast were carefully uprooted and decimated and during preparations for 2015 general elections particularly the presidential poll, Christians in their millions, were denied permanent voters cards and every single living Muslim including millions of the under-aged were captured and issued with voting cards.

For instance, Mr. Francis Emmanuel, a Christian carpenter, was attacked by some Muslim fanatics backed by violent northern politicians. The attack took place in Kakuri area of Kaduna State. He was inflicted with deep machete cuts on his head and other parts of his body for “eating during the Ramadan fast”. Another Christian and 74-year-old member of Deeper Life Bible Church, Mrs. Bridget Agbahime, was stoned to death in Kano by some Muslim traders for “blaspheming against Prophet Mohammed”. In the same period, a 42-year-old Deaconess Eunice Elisha Olawale, a member of the Redeemed Christian Church of God in Abuja was murdered by some sponsored Muslim fanatics during her early morning preaching in her neighborhood.

On 15th of July 2016, worshipers at Saint Philip Catholic Church in Baki Ikun along Kaduna Road in Suleja, Niger State and their Church were invaded, attacked and burnt by some politically sponsored Muslim fanatics for “worshiping on Friday solely meant for Muslims”. Other instances of killing including beheading and lynching of Christians and burning of their sacred places of worship by the malicious and untamed entities named above are too numerous to mention.

Through State created, aided and abetted Fulani Janjaweed violence, targeted at rural Christian populations in North-central or Middle-Belt, Southeast and South-south Nigeria, thousands of innocent rural Christians have also been murdered in their sleep and farms. Since the inception of the Buhari administration on 29th May 2015, over 1000 Christians have been massacred.

In 2014 alone, 1,229 mostly Christians were massacred by the Government backed agro-religious fundamentalist group, erroneously called "Fulani Herdsmen". In six months of 2015 (January-June), 621 mostly rural Christians were massacred. In this 2016 alone, over 500 including over a dozen Christian priests and royal fathers have been butchered in their sleep and farms by the Government backed Janjaweed. The list of persecution and butchering of Christians in Nigeria is inexhaustible.

Over 250 members of Igbo- Christian Nigerians have also been massacred while over 400 others terminally shot and maimed between 30th of August 2015 and 30th of May 2016; a period of nine months. The massacre and maiming of these innocent and unarmed citizens took place in Southeast and South-south regions of Nigeria and were perpetrated by Nigerian security forces under a presidential death-code handed down to them by the Buhari administration for the purpose of violent suppression of nonviolent assemblies and democratic free speeches organized and expressed by regional self determination activists. The activists have till date never used or advocated group violence in Nigeria or any part thereof.

Till date, the Government of Gen Muhammadu Buhari, which has constitutional repository of securing and ensuring lives and properties of all Nigerians including holy places of worship has neither tamed the butcheries nor fished out their perpetrators. As we speak, none of the perpetrators has been fished out and put on trial. That is to say that Government is fully aiding and abetting the sundry ethno-religious cleansing and butcheries. It also partakes circumstantially and vicariously, if not directly. When Government aids and abets crimes, it becomes expressly culpable. The unwillingness and inability of the Buhari administration to protect the Christian populations in Nigeria and uphold the sanctity of secularity and collective security of all Nigerians are alarming and deafening.

The Buhari administration, from every indication, is also running an Islamist government. The Constitution of the Federal Republic of Nigeria and its sacred Sections 10 (secularity of the country), 14 (2) (b) (security and welfare of the citizens), 14 (3) (geopolitical spread and equality of federal appointments, promotions and postings) and 38 (1) (right to freedom of thought, conscience and religion) are being threatened, battered and disrespected with reckless abandon by the Presidency of Muhammadu Buhari.

Manifestations of State Jihadism: State Jihadism is the effort of the State and deployment of State coercive instruments and resources in defense, propagation and promotion of Islamic faith at terminable expense of other dominant religions within a political territory. It also has to do with State encouragement, aiding and abetting of religious intolerance and coordinated violence against members of other dominant religions and destruction of their holy places of worship as well as promotion of discriminatory and exclusionist policies aimed at concentrating key security and public institutions and decisions in the hands of Muslims. The foregoing has remained the keystone of the Buhari administration till date.

For instance, out of 48 key public securitization appointments under the Buhari administration, 38 are allocated to northern Muslims with only 10 allocated to the South, with about two of them retained by Muslims. In these sensitive security appointments, the Southeast zone with largest concentration of ancestral Christians in Nigeria is left with zero allocation. The recent promotions and postings in the senior command hierarchy of the Nigeria Police Force are a further attestation of the Buhari administration’s determination to entrench State Jihadism in Nigeria.

In the present composition of the NPF under reference, Northern Muslims are in firm control of 70% of the 37 State CPs and the FCT. Also 70% of the AIGs in charge of the country's 12 Zonal Commands are Muslims and none is allocated to the Southeast. Muslims also dominate up to 70% of the headship of country’s strategic police formations and establishments such as Police Marine, Police Border Patrol, Police Highway,  Airport Police,  Police Anti Terrorism,  Police SARS, FCID, SCIDs, Federal and States Operational Commands, Special Protection Units, Anti Bunkering Squads,  Area Commands, Divisional Commands, etc. We challenge the Buhari administration to proof us wrong by publishing publicly the geopolitical origins of the heads of these strategic police formations mentioned above. The headships of other security forces in Nigeria including army, navy, air force, DSS and their strategic formations are also grossly lopsided and Islamist oriented.

With headships of the country’s security formations dominated and concentrated in the hands of Muslims, with another intolerant Muslim as Nigeria’s President, it is inexcusably understood why the persecution and butchering of Christians and burning of their places of worship have continued unchecked and untamed. These have also led to disproportionate emergency responses from security agencies and headships during politically coordinated mob or group violence against Christian populations and citizens in Nigeria. Several investigations carried out by the public security and safety department of this organization (International Society for Civil Liberties & the Rule of Law, clearly indicate that Nigerian security agencies promptly respond to threats of reprisal violence by ethnic or religious victim-groups against their Muslims attackers as against their little or zero responses when Christians or other ethno-religious protagonist groups are attacked violently by Muslims. Security responses in the latter precarious situations are substantially, if not totally reactive or medicine after death security approaches.

The Christians leaders in Nigeria must, therefore, rise to the occasion and ensure that the ongoing persecution and butchering of Christians by their violent Muslim counterparts are competently resisted and put to an end. Advocacy steps must also be taken by Christian bodies and leaders to force the administration of Gen Muhammadu Buhari to jettison the administration’s obvious State Jihadism and Islamist policies and return Nigeria back to practicable constitutionalism, rule of law and secularity.

Failure of the Christian clergies in Nigeria to lead the way to ensure cessation and stoppage of these butcheries may most likely be a call for reprisal radicalization by their laities. Christians in Nigeria must not be forced to return to Medieval Saint Augustine era or Augustinian Epoch during which competent defense of Christian Faith by all means marked out a successful defender as a martyr and mandatory Heaven maker if killed in battle fronts or triumphed over enemies. The Buhari administration must, therefore, rise to the occasion and desist from teaching Christians in Nigeria the hard way in defense of their Faith and right to freedom of religion and worship!