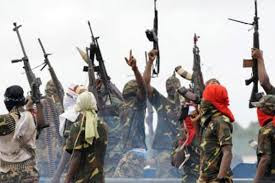 
The Nigeria military arrested school students in Oporoza and called them the Niger Delta Avengers, any criminal caught is NDA, ever their Business partners (Illegal Oil bunkers) with which things went south are NDA, Sea pirates are now NDA.

When Niger Delta Avengers carries out any major attack they (Nigeria Military) will deny it. First was the NNPC pipeline that was blown, second the 48-inches Exxonmobil pipeline that was blown by NDA.  Mobil and the Government denied it. Only for Exxonmobil to declare false majeure few days after the attack. We want the general public to know the Qua Iboe export pipeline is down right now.

Let me give a little brief about the Qua Iboe Export terminal. This is a subsidiary of Mobile and it the biggest export stream in Nigeria. They export ONE MILLION barrel every two days.

I Brig. Gen Agbinibo personally led this operation. Unlike the Nigeria Chief of Naval Staff that sit in the comfort of his office to pass orders.

The Nigeria Military should stop deceiving the general public and their commander in Chief. They should come out with the truth in Akwa Ibom instead of saying Niger Delta Avengers didn’t blow up thr line but system anomaly. Shame on the Nigeria Military.

How do you explain a military officer having a house in choice areas in Nigeria and outside the country? Nigeria serving and retired top officers are the richest people in Nigeria. How do they get such wealth? Right now, they are using Niger Delta Avengers to fraud the Nigeria government and tax payers of their money.

We want to make this clear, all Niger Delta Avengers operatives are intact, our intelligent agencies are all intact and our operative team are in high spirit because we are winning the war. Nigeria Navy can’t arrest any of our operative until we bring down the economy of this country.

We are warning Nupeng and Pengassan to leave all oil field and terminals in the Niger delta because it will be going to be dirty very soon. Foreigners are to leave too.