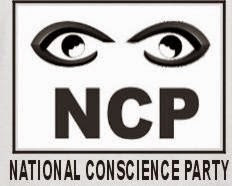 (On The Flagrant And Unrepentant Breach Of The Provisions Of The Constitution On The 3rd Tier Of Government In Lagos State By The Lagos State Government,  Held At The State Secretariat Of The National Conscience Party (Ncp) At No. 7, Olayinka Bamigbose Street, Off Olowu Street, Ikeja Lagos  By Ayodele Akele National General Secretary, Ncp, Wednesday 29th June 2016)

We are compelled to address this press conference due to clear subversive, dangerous and inimical activities of Lagos state government to the survival of democracy at the third tier of government in Lagos State.

It could be recollected that our party took Lagos State Government to court over its constitutional breach in imposing caretaker committee to run the affairs of local government in Lagos sate and its failure to conduct election to democratically elect leadership at that tier of government when due since 2014. The suit no: LD/318MJR/2015 commenced by an exparte motion dated January 6, 2015 with 4 prayers but principally for an Order declaring unconstitutional, null and void, and of no legal effect, the posts of all officers, however called or described purportedly occupying the positions of Local Government Chairman and Councilors in Lagos State after October 2014 when the tenure of the last Administration terminated.

The judgement delivered on 23rd day of October 2015 granted reliefs 2 and 3 of our Motion on Notice dated March 25 2015 and made the ORDERS as follows:

2 An ORDER of Mandamus is made directing the Lagos State to conduct election into the local government in Lagos State and An ORDER to publish electoral guidelines and timetable within 30days for election to be conducted in line with the provisions of the Lagos State Independent Electoral Commission Law.
3The Local Government Committee Law 2002 is also liable to be set aside for being contrary to Section1 (3) of the Constitution apart from being contrary to section 1(2) of the Constitution. The Committee ‘’Caretaker’’ appointed under the law is dissolved and the Secretaries of the ‘’ Caretaker Committee’’ are hereby relieved of their appointment forthwith.

The Lagos State Government, LSG, was dazed by this judgement that was given on its merit, quickly gave a notice of appeal and praying for a stay of execution.The matter came on 18th January 2016 for hearing of the appeal and application for stay of execution of the judgment filed by Attorney General, AG, Lagos state, but the court did not hear the application in view of the information from Lagos State Independent Electoral Commission, LASIEC, and AG Lagos that their Appeal had already been entered at the Court of Appeal .The Appeal having been entered, the High Court can no longer entertain any issue in the case. The Appeal and all pending applications will now be heard by the Appeal Court and the Court of Appeal is yet to fix a date. So parties are waiting for the date at Court of Appeal.

This is the stage where we are now contrary to the numerous APC sponsored propaganda and disinformation campaign. Of particular interest are the misleading views as published in the Sunday Guardian Magazine column of 19thJune 2016 and The Guardian of Monday 20th June 2016 by one Gbenga Akinfemiwa that LSG won the Appeal. An Appeal that is yet to be heard!

The Ambode –APC regime in Lagos even went to the extent to criminal allege that the National Conscience Party, NCP, is to be blamed for their refusal to organize elections into the local councils because of our law suit.

It is amazing that instead of putting necessary machinery in motion to conduct this overdue local government election Lagos State government has be running from pillar to post since this land mark judgment nullifying their illegal caretaker appointment and ordering them to put machinery in motion to conduct election into local government councils of the state,all in a desperate attempt to frustrate, the execution of the judgement of the high court and thereby dangerously subverting democracy that was fought for the Nigerian masses.

They embark on a wild goose chase of so-called of re-composition of the board of LASIEC, a lamed excuse to delay local government election in Lagos.

As part of delay tactics also tinkering with local administration law in the name of preparation for LG elections, that has nothing to do with conduct of election in reality.

The latest is to flagrantly go into another aberration and contemptuously tampering with the status quo of the ruling at the lower court by dissolving its own illegal caretaker committee it imposed on local government, change its nomenclature to SOLE ADMINISTRATOR (obviously due to our legal challenge) and thereafter appointing and swearing in SOLE Administrators to run local councils in Lagos State instead of complying with court ruling!

What an aberration from aberration. What an illegality from illegality! What an affront on the constitution!! What a dangerous subversion of democracy at this third tier of government. What a treachery!!!

The reasons for the attitude of LSG are clear. Despite the fact that they would rig the election and concoct figures they are still not sure of themselves. They do not have anything to sell to Lagosians to assure them of victory at the polls.The APC government at all levels have failed and disappointed Nigerians.They have nothing to offer. They have nothing to showcase and sell to the electorates. Is it the N145 per litre of petrol they want to sell? Or the 45% wicked hike in electricity tariffs, they want to sell or job massacre across the country or lies or failed and unfulfilled campaign promises? They are apprehensive and afraid to undertake local government elections at this material time as conditions on the ground are not favorable even from their survey, yet they are desperate to hold on to power.

These combined with the fact that they a plundering the resources met for the local councils. The local government accounts have been totally merged with the State government and it has been looting galore all through in Lagos. The evidence that there is no anti-corruption crusade going on in Nigeria can clearly be since by the reign of corruption in the Lagos local council. And the consequences of these atrocities are grave for the masses as infrastructures continue to collapse.

The APC wants to maintain its crude and corrupt control over our local councils at all cost. This must be resisted.

The crude manipulations of the affairs of local government councils knows no bounds under the APC as the APC controlled State house of assembly recently carried out what it termed “amendments” to the laws governing local councils in Lagos State.

These so-called amendments are further violations of basic democratic principles and another gross violation of the constitution by inserting a clause in the Law empowering the Governor to remove elected Local Government officers at will. This is part of the grand design delay tactics, tickering with local administration law in the name of preparation for LG elections -  that has nothing to do with conduct of election in reality

It is clear that these so-called laws are introduced in order to continue the crude control of the affairs and resources of the local councils at the expense of the masses.

Our Struggle For Liberation Of Lagos LGS

In other to safe the local government from been extinction, curb APC control LSG excesses, illegality, impunity and tyranny, this party has resolved to further institute another legal action against LSG to challenge the unconstitutional amendment to local government administration law.

We discovered also LGS is comfortable looting and sharing the allocation being remitted to illegally caretaker or sole administrator, with nothing to show for it in terms of development and they will never be in a hurry to conduct the election, since they are sharing the monthly allocations. Hence we are also given notice of heading to the court to file for an order of mandamus to stop further remittance to illegal caretaker or sole administrator heading local government and that the money be kept in suspense account and should only be released after a democratically elected takes over the governance of LGs.

We are determined to follow up the appeal at the Court of Appeal in spite of the crude delay tactic aimed to frustrate our legal struggle.

In the meantime We are demanding that the Finance ministry to put on hold the remittance of further Federal Allocation due to Lagos state local government in Lagos state. The allocation should be keptin suspense account until the constitutional requirement of a democratically leadership is put in place at local government level in Lagos State.

We are demanding for a public probe into the allocations to local government councils in Lagos and bringing to book and prosecute the impostors, illegal occupants, usurpers and the meddlesome interlopers in the name of caretaker committee or sole Administrators over misappropriation and illegal collection of funds

The National Conscience Party remains the only party of the masses standing and the last hope of the working and oppressed masses. The motto of the party remains “ABOLITION OF POVERTY”.

The NCP remains the only party in Nigeria today that fights actively on the side of the masses in practically all the socio-economic and political struggles they have been waging over the years. The last struggle against the fuel price increment is another case study.

It is within this context that we are committed to the struggle against the APC crude and undemocratic control of the Lagos local councils, which they have effectively placed under siege and the people in slavery.

We are committed to fighting this struggle to the very logical end.