Article: Lessons From The First Families 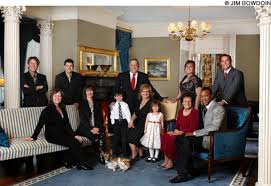 Do you know Ann LePage? She's the (third) wife of Paul LePage, the right-wing weirdo, out-of-control and ever controversial governor of Maine, a man with an inspiring story of growing up on the streets after running away from an abusive step-dad at the age of 11 and who in spite of all odds went on to college, became a company executive and then a governor.


As customary in the West, Paul took a sharp pay cut for transitioning from the private to public sector. According to the US Census data, the average yearly income for a married-couple family in Maine is about $87,000. As the lowest paid governor in the country, LePage gets a salary of $70,000, a figure that has remained unchanged in the state since 1987 which Paul unsuccessfully attempted to double for his successor, starting in 2019, after which his term would have ended.

Ann has dreams, goals and aspiration and like any woman with a knack for good taste, she has her eyes set on getting a new SUV - Toyota RAV4 which costs around $24,350, as one of her immediate dreams. Having given up her a job to wholly put herself behind her husband and knowing full well that Paul's income - the family's only - cannot support this dream, she knew she had to do something about it. Full-time job was not an option because of her Stately commitments. Candidly, $70,000 is too little for a governor in America, more so for a man with the need to support his five children - four biological from his two previous marriages and one adopted son, the son of his former caddy in Jamaica.

Many governors and even the US president would tell you that living in the State House doesn't necessarily come cheap. Like in a luxury hotel, at the end of each month, the president or a governor receives bills for their food and incidental expenses. It can be really frustrating for some of them.

Nancy Reagan didn’t hide her surprise at this practice when an usher presented her first bill in 1981, saying, "Nobody ever told us the president and his wife are charged for every meal, as well as incidentals like dry cleaning, toothpaste, and other toiletries."

Similarly, former first lady Laura Bush wrote in her post-White House memoir - "Spoken from the Heart" - that "the presidential room, as it were, is covered, but not the board…...it is more than fair that they pay for personal items like every American household…..There were some costs that I was not prepared for……..I was amazed by the sheer number of designer clothes that I was expected to buy, like the women before me, to meet the expectations for a first lady." Bush wrote that a bill came monthly, itemising everything she and her family owed, including food, dry cleaning and hourly wages for waiters and cleanup crews at private parties. Little wonder the Bushes often found it far cheaper to eat meals outside the White House.

Not everything is free for the First families. They even have to pay to take family members or friends who are outside the official delegation for any official trip.


What Did(n't) Ann do?
Ann wanted the car badly but she couldn’t and wouldn’t go the easy ways that could be self-destructing. The easiest options are not necessarily the best! She wouldn’t coerce her husband to ‘goatify’ the state’s ‘yam’, a parlance for illicitly digging hands in public treasury by government officials in spite of her husband overseeing a $6.7b (N2.13 trillion) budget that is more than a third of Nigeria’s Federal government budget notwithstanding that Maine, a state with 1.33m population ended the 2015/16 financial year with $93 million (N29.6b) budget surplus.

Ann wouldn’t take kickbacks from state contractors and lobbyists who might want to curry her favour and she wouldn’t take gift from affluent friends who would be pleased to associate with the State’s first family.

Apart from the honour and glamour of office, politics can be financially rewarding as well but this usually happens after leaving office when opportunities like book deals, commercial endorsement, boardroom participation and public speeches abound. Public servants are usually forbidden to use their positions for financial gains while still in office because of conflict of interest.

Ann chose to go the honourable way. She laid down pride, took a part-time job as a waitress in a local restaurant by following in the footsteps of her stepdaughter as described here by Paul, her husband: "My daughter last year, she's in law school, she made $28 an hour working in Boothbay as a waitress, server. She did so well, my wife, the first lady, to supplement the governor's salarymen is waitressing this summer. I'm kidding -- not kidding really" - Governor LePage

Ann LePage has proven that there’s dignity of labour, a philosophy that all types of jobs are to be respected equally. If you by any chance go to McSeagull’s restaurant in Boothbay Harbor this summer, there is a likelihood that the firstlady will be your your waiter.

Also, last week, the internet was awash with the story of Sasha, the younger daughter of US President Barack Obama being spotted taking some time off from the comforts of the White House to work at Nancy’s, a seafood joint on Martha’s Vineyard at Cape Cod in Massachusetts where the family is currently having their summer vacation. Regardless of their positions, the Obamas teach their children the simple ways of life, hard work and the dignity of labour.

Last year elder daughter Malia also did a summer job at the set of HBO's "Girls." with Lena Dunham. She is currently taking a "gap year" off schooling most probably to do some voluntary work before attending Harvard University (like her parents, who both attended Harvard Law School) in 2017.

From these stories and for the benefit of all, I hope Nigerians, especially politicians can learn to always eschew corruption, live within their legitimate means and do the honourable, and also teach their children hard work and humility so that they can grow up to be useful members of the society.