News Release: Only IPOB Members Were Massacred On May 30th 2016 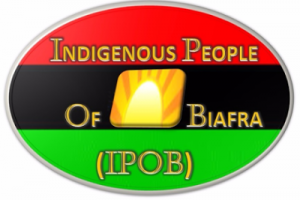 The Indigenous People of Biafra (IPOB) want to put the records straight by affirming that only IPOB members were massacred by armed security team led Col Isa M. Abdullahi, the Commanding Officer of 302 Artillery Regiment Onitsha which is under 82 Division of the Nigerian Army. We are making this clarification because of the falsehood reported by Terhemba Daka of the Guardian Newspaper. According to Terhemba’s erroneous report of 23rd August 2016, “The House of Representatives Committee on Army has started collating information on the alleged killing of members of the Movement for the Actualization of the Sovereign State of Biafra (MASSOB) and Indigenous People of Biafra (IPOB) by security agencies in Anambra State on May 30, 2016.“ Terhemba further stated that “Biafran agitators clashed with security agencies, during the 50th anniversary of their fallen heroes near St. Edmund’s Catholic Church, Nkpor, off Nkpor -Umuoji road, in Idemili North Local Government Council.“ This is the height of irresponsible and unprofessional conduct in journalism and a crass display of the notorious “brown envelope“ journalism.


First, we have to remind Terhemba Daka that it is on record as reported on Thisday Newspaper on May 31, 2016 that Uchenna Madu of MASSOB confirmed that his members were not involved in the Remembrance Day activity and that none of them was killed. How then is it possible that MASSOB members were killed when they never participated during the Biafra Heroes‘ rememberance of May 30th 2016? By the way, has MASSOB ever conducted Biafra Heroes remembrance since its existence?

Secondly, Terhemba reported falsely that “Biafran agitators clashed with security agencies, during the 50th anniversary of their fallen heroes near St. Edmund’s Catholic Church, Nkpor, off Nkpor -Umuoji road, in Idemili North Local Government Council.“ The question for Terhemba is: How is it possible for unarmed and peaceful Biafrans who were sleeping inside a church be “clashing“ with well-armed soldiers of 302 Artillery Regiment led by Col Isa M. Abdullahi and assisted by Major C. O. Ibrahim?  It beats the imagination of any discerning mind that harmless Biafrans in their sleep will be “clashing“ with soldiers who are armed to the teeth and commanded by an officer of the rank of Colonel (Isa M. Abdullahi) and assisted by a Major (C. O. Ibrahim).

This same “brown envelope journalist“ reported that ”A faction of the aggrieved victims however, stayed away when the panel arrived Enugu, a development that forced the committee to demand written memoranda. This option was communicated to them via a go-between.” In addition to the pack of lies, he also reported that “Another faction however, later testified at a closed-door meeting at night.”

Our questions to this unprofessional Terhemba Daka are: (1) Which faction of the aggrieved victims stayed away when the so-called panel arrived at Enugu? (2) Which is the other faction that later testified and why should they do so behind closed doors and in the middle of the night for that matter? (3) Who is this go-between that was used by the so-called panel to communicate to the faction of the aggrieved victims? (4) How come two Muslims from the Northern part of Nigeria namely Col Issah M. Abdullahi and S. A. Mohammad of DSS were the only two people who testified at the sitting of the so-called panel as reported by Terhemba Daka?

It is also interesting to read from Terhemba’s skewed report that the leader of the killer squad Col Issah M. Abdullahi averred that “the activities of MASSOB, IPOB and their affiliated groups, were detrimental to national security. Similarly, their violent protests and continued attack on other Nigerians residing or carrying out their legitimate duties have resulted in deaths, injuries and destruction of properties, which could result to reprisal action in other parts of the country.” The only response we have to these allegations by Col Issah M. Abdullahi is that he should have his records and evidences intact because he will surely be demanded to substantiate his allegations at the appropriate time. Failing to substantiate his allegations, he will spend the rest of his life in jail, that is if he doesn’t pay with his own life along with Major C. O. Ibrahim. The same response goes to Deputy Commissioner of Police, Johnson-Babatunde Kokumo who claimed that 45  Biafrans were arrested and charged to court  “after an attack on the military with all sorts of weapons during a clash at Enugu-Onitsha Expressway by New Tarzan, Boreo and old Nkpor-Awka Road.”

Even though Terhemba Daka used the phrase “alleged killing”, we would like to remind the world that the massacre of Biafrans on 30th of May 2016 was reported as confirmed killings by most Nigerian media and not as “alleged killings.” We refer Terhemba to Premium Times of 13th June, Thisday of 31st May and 11th June, and Daily Post of 31st May. Even the Army confirmed that they killed Biafrans as published in Premium Times of 31st May and Daily Post of 31st May. Also, Makmid Kamara who is the project coordinator for Amnesty International confirmed to the VOA on June 10, 2016 that Nigerian soldiers shot and killed unarmed Biafrans during Biafran Heroes Remembrance Day of 2016.

It is laughable that S. A. Mohammad of DSS could not tell the difference between MASSOB and IPOB when he accused IPOB of “producing international Passport, Driver’s Licence and Vehicle Number Registration Plate”, which are activities specifically associated with MASSOB in addition to kidnapping and armed robbery. There is no record anywhere in the world where IPOB got involved in printing of international passport, driver’s license or vehicle number. All Biafrans can testify that the incidences of kidnapping and armed robbery have stopped since the emergence of IPOB.

IPOB would like to advise the so-called House of Representatives Committee on Army to invite the Biafraland Coordinator of IPOB, Mr. Chidiebere Onwudiwe if they are really interested in getting the facts of what happened on the 30th of May 2016. Any representation from IPOB to any panel that is not led by Chidiebere Onwudiwe is null and void and of no effect.  Bringing in MASSOB into the case of the massacre of IPOB members and convening a hearing session in the middle of the night behind closed doors all go to prove that the so-called panel is acting a script prepared by Retired Major General Muhammadu Buhari in view of his upcoming unavoidable indictment and imprisonment in The Hague.

Muhammadu Buhari escaped trial at the International Criminal Court (ICC) in The Hague for the killing of over two million Biafrans in 1968 at Owerri. He has also escaped death penalty after committing treason on December 31, 1983. But he will never escape justice at the ICC for the mass-murder of Biafrans which he started on June 17, 2015 and continued till date. It may take a little while but ultimately Buhari and his murderous colleagues must have their date in court and their years in prison.

We conclude by re-affirming to the world that those massacred by Col Isa M. Abdullahi and Major C. O. Ibrahim on the 30th of May 2016 were all members of IPOB and not a single member of MASSOB was killed. However, killing us will never stop the irreversible and irrevocable restoration of the nation of Biafra. The restoration of the nation of Biafra is a divine project that is beyond human destruction or stoppage, be it Retired Major General Muhammadu Buhari, Col Isa M. Abdullahi or Major C. O. Ibrahim.