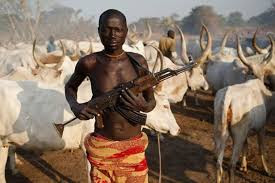 The Civil Liberties Organisation, (CLO) South East Zone condemns in totality the brazen murder and killing of innocent citizens of Igbo land in different parts of the South East by Fulani herdsmen.


The latest incident that happened last Thursday at Attakwu community, Nkanu East local government area of Enugu State few months when Ndigbo were yet to get over the shock of the Nimbo, Uzo Uwani killings in this same manner is callous, provocative, wicked, premeditated and smacks of a clear intent to continue decimating a particular ethnic group even in their own fatherland.

This is pure act of barbarism and terrorism against the people while the actors are emboldened to carry on in their ignoble role because we were made to understand that some people own the country while others are second class citizens.

It will be recalled that The CLO after its Zonal Management Committee meeting held in Enugu on 23rd July 2016 had in our communiqué raised after the meeting condemned in strong terms the growing incessant, unwarranted and unprovoked ATTACKS ON DIFFERENT COMMUNITIES BY FULANI HERDSMEN, and the Federal Government’s refusal to halt the ugly development and their insensitivity to the cries of affected citizens.  We had noted that beside the massive killings at Nimbo, in Enugu State, other cases have been reported at various parts of the South East including at Amaoha in Ikwuano Local Government of Abia State where a Fulani Herdsmen was alleged to have pulled a rifle aimed at killing the traditional ruler of the community and some of his subjects.

In Ohafia of the same state, herdsmen have been reported to have hoisted a flag declaring the area “Fulani Republic”. There have also been several reports of highway robbery, kidnap, rape and murder attributed to Fulani herdsmen.

While we commend the Enugu State Governor, Rt. Hon Ifeanyi Ugwuanyi and the Catholic Bishop of Enugu Diocese , Rt. Rev. Callistus Onaga for their prompt and timely visit to the scene of the latest incident and their interface with the people of the area to douse tension, we dare say that the situation has turned desperate and also needs desperate solution to tackle.

We say that Enough is Enough to this window dressing over the wicked and calculated acts of so called Fulani herdsmen. This has gone beyond calling for prayers, fasting and visiting Mr. President in flowing Agbada even when it is obvious that the same Mr.President has not shown any serious commitment in clipping the wings of this murderous group in their blood thirsty mission.

Today it is in Attakwu while no one knows their next target because as it stands now, various communities in Enugu State and other parts of the South East have become endangered species.

This is not the time to downplay or hide the activities of the Fulani herdsmen operating in different communities.  As a start, the Governor of Enugu State should immediately summon all the traditional rulers and President General of all the communities in the state to ascertain the actual number of communities harbouring the herdsmen in any form.

The government should order for the immediate sack of all the herdsmen operating in different localities except in designated Garki market where few of them must be restricted to for the mean time before their total flushing.  Their settlements should be destroyed immediately while they should be sent packing without further delay. There is no point pretending that they are our friends when they have clearly shown that they are killers without disguise.

It has been established as a fact that some traditional rulers enter into alliance for financial gains with some of the herdsmen in some communities for their grazing. This ugly practice should cease henceforth without delay while any one found breaching this directive should be severely penalised.

Enugu Governor and other governors of the South East should as a matter of urgency sponsor bills at the State Houses of Assemblies to criminalise indiscriminate grazing while operation -stop –the- unwholesome -activities of the herdsmen should be launched immediately.

It is quite painful and disheartening that  a seminarian who would have played critical roles in drawing souls to God when ordained should be mowed down in such  grueling circumstances while the gory sight of the other victims who may not actually survive the onslaught  stare us in the face out of the heartless and mean nature of the attackers.

Proactive measures and intelligence gathering remains the hallmark of the 21st century policing and security instead of reactionary and after effect fire brigade approach.

All hands must be on deck to ensure that this monster is nipped in the bud while these merchants of death are routed from our soil once and for all.

Malcolm X during the Settler Racist Occupation had to tell his fellow African Americans that “We have to fight them by all means possible”
Raising voices of condemnation by several groups without requisite action by the governors who are the chief security officers in their various states will amount to exercise in futility.

The time to act is now and never again shall our people be allowed to die in this callous manner.