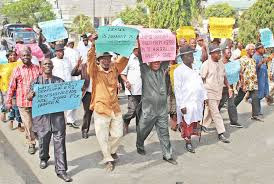 It shocks and alarms us on continuous basis concerning orchestrated and systematic stigmatization and criminalization of the citizens’ rights to freedom of association, expression, movement, personal liberty and fair hearing by the Nigerian Security Forces and unprofessional print media; particularly since the inception of the Government of Gen Muhammadu Buhari. Despite the enshrinement of these fundamental human rights and their justiciability (S.46), on account of their containment in Sections 40, 39, 41, 35 and 36 of the Constitution of the Federal Republic of Nigeria 1999, as amended in 2011; they have suffered gross brutalization and bastardization in the hands of the Security Forces and unprofessional print media.