Article: The North, Shiites And The Quest For Tolerance 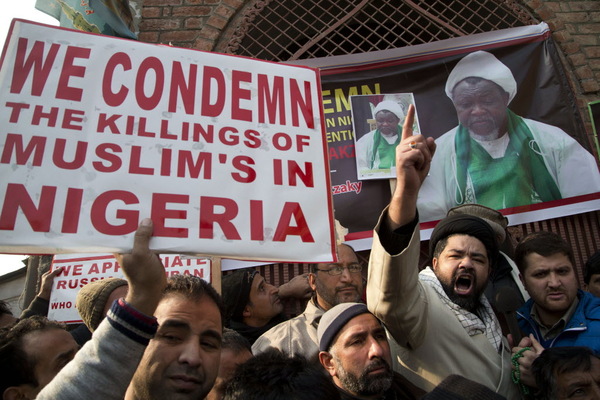 Today in northern Nigeria, we live in critically challenging times, with our cultural harmony rapidly disappearing and our political unity fast disintegrating, leaving social and political vacuums that are now
hotly contested by two mutually-rejecting, nihilistic tendencies, each equally vicious and destructive. One does not require a Mensa IQ to conclude that our society is dangerously tethering on the edge of the precipice, heading inexorably towards a disaster. Our culture, our history, and our civilization are under threat. The way we handle those existential challenges today determines how posterity will treat
us tomorrow.

This piece is conceived in fear and borne out of desperation. Fear over the north’s steady descent into sectarian abyss, and the desperation to arrest this slide before it is too late, before we are all consumed by it. Therefore, in diagnosing our problems and proffering solutions, I do not intend to surrender ourselves to the self-imposed tyranny of political correctness that often characterize discussions such as this.

The recent sectarian mob violence targeted against the northern Shia minority should enrage any believer in justice and freedom. That appalling display of lawlessness and barbarism must be unreservedly condemned by everyone. It is bereft of any legal, moral or social justification. Those angry mobs who cheerfully lynched their fellow citizens and torched and looted their properties have desecrated the very religion (or values) they are claiming to protect, and the clerics who silently or loudly abetted such travesty have betrayed their calling as men of peace.

It is beyond the scope of this piece to trace the historical root of the Sunni-Shia antagonism in Nigeria, but the Shia-military clashes of 2014 that led to the death of Zakzaky’s three children is a watershed in the timelines of events that led us to where we are today. That tragic encounter set the stage for a more tragic one the year after, that saw hundreds of Nigerians perished and billions worth of properties damaged, further deteriorating the already fragile sectarian stability and bringing our peoples closer to sectarian civil war.

I do not intend to make light of the Shiites crimes and transgressions, both real and imagined. Granted therefore, that the Shiites stand guilty of sectarian incitement, provocation, road blockage and wanton disregard for law and order, but no Nigerian sect or party can claim innocence on all those charges, and under our laws and norms, none of those crimes carries the price of a death penalty. Human life, according to all secular and religious conventions, is sacred, and no one has the right to take any life without recourse to law, to judicial due process, except in cases of obvious self-defense. But in Nigeria, putting the sacred tag on each soul does not prevent the next Shiites from being lynched in our streets, or the next petty thief from being lynched in our markets. Extrajudicial killings have become a Nigerian hobby and our failure to do anything qualifies as acquiescence, as an indictment on our collective humanity and pretend
religiosity.

More disheartening however, is the tendency of Nigerians to view crimes through partisan and sectarian prisms. The Shia clashes of 2014 and 2015 are two cases in points. Our partisan social media
commentators found it politic to describe the tragic Shia clashes of 2014 as a Jonathanian massacre of defenseless Shiites by the genocidal Jonathanian army, but the more tragic one of 2015 as a Shia
provocation against the almighty Nigerian army. To them, justice and fairness is directly proportional to the prevailing political reality and not facts on ground. And therefore, those who condemned the
tragedy of 2014 become the staunch legitimizers of the travesty of 2015. Nothing can be more absurd!

If the political partisans are guilty of reducing human life to a political commodity based on defined exigencies, the sectarian partisans are even worse, for they not only legitimize the violence against the Shia minority, they also equate every sympathy for the victims and any criticism against the perpetrators to a sin resembling apostasy. In doing that, they succeed in silencing every dissenting
voice for justice and fairness and provide a veneer of popular support to their acts of treacherous inhumanity. Many have tried to strike a balance between condemning the Shiites and the actions of the military by drawing an imaginary ethical equivalence between alleged lawbreakers (the Shiites) and constitutionally mandated law-enforcers (the security agencies). But there is no moral equivalence nor ethical symmetry. There is only one denominator here, which is that of Nigerian lives being wantonly wasted without any recourse to judicial process or rule of law, and that a sizeable majority of Nigerians are either happy or indifferent. And the fact that such violence finds support among educated northerners speak volumes about our appalling bigotry and intolerance.

This culture of hate, intolerance and inter-sectarian suspicions bodes ill for interfaith and intrafaith relationships. As Sunnis, our children are taught to hate the Shiite-other, and Shiites are taught
to hate the Sunni-other. Those indoctrinations subliminally paint the other as violent, conspiratorial and demagogic, and therefore incapable of peaceful coexistence and undeserving of our respect,
tolerance and understanding. By doing this, we forget or negate one of the basic principles of our own faith where diversity is seeing as a manifest of a divine design and guidance as a function of divine will.

The Shiites, like every other religious sect, have their peculiar problems and shortcomings. Their contempt for secular authorities and open disregard for law and order are affronts to their constitutional obligations and to the fundamental rights of other citizens. However, to shun all other sides and tell the world that the Shiites are the most violent and intolerant speaks well of our ideological hypocrisy. Because, statistics have shown that violence against the Shiites are more than those  perpetrated by the sect. But because of our inherent bias, there is the tendency to underreport violence against them and amplify those perpetrated by their adherents, and thereby exaggerating their villainy and watering down the facts of Shia victimhood.

It is easy to condemn the Shiites as being misguided, forgetting that religious text and injunctions are subject to interpretation. The solution therefore, lies in scholarly discourse and not scholarly scorn because the problem is rooted in the erroneous belief that it is only our interpretation that is correct and legitimate, foreclosing the chance of further dialogue.

We can achieve this by practicing our religions with "... Lakum dinukum wa liya deen: To you your way, and to me mine" on our mind, by believing in what we believe without calling each other names and declaring each other heretics/apostates or wanting them dead, by living in peace, harmony and understanding with one another, through mutual respect, and without belittling each other's belief system.

We should let our education and training not only reflect our social media profiles and professional citations, but also reflect our character and behavior. Because, education is meant to free us from our own prejudices, from our own insanities. Education should not only make us employable and rich, education should make us a better, loving, and peaceful people. Education should help us embrace and respect all humans regardless of race, ethnicity, ideology or religion; we should work towards making the world a better place, not ruining it by our actions and inactions.

Therefore, we must all rise up against this sectarian challenge. We must dismantle all barriers to dialogue and eliminate all those factors that promote sectarian tension and radicalization, especially for our youth. De-radicalization, like charity, must begin at home, with the very clerics whom their respective sectarian adherents look up to for guidance and inspiration. With dissension and rebellion being part of the Shia DNA throughout its troubled history, the IMN, as the largest representative of Nigerian Shiites must re-evolve itself and commit to conducting its activities in a legally responsible and socially constructive manner.

Above all, government should be concerned about the types of ideologies openly preached. We must strike a balance between fundamental human rights and collective national interests, by working towards entrenching justice and respecting and protecting the fundamental human rights of all Nigerians, irrespective of the Godthey worship or ideology they profess, in a way that does not harm the collective peace and stability of our people. Unless we achieve this,Northern Nigeria will be on the path to sectarian chaos, the path ofAfghanistan, Iraq and Pakistan. Through education and dialogue, agreeing with Nelson Mandela, we can be able to achieve that peaceful, accommodating, developing, flourishing and promising [Northern] Nigeria. Like minds, let us embark on this mission in every possible way we can. It will take a long time to complete, but let us remember Lao Tzu's epic one-liner: a journey of a thousand miles begins with asingle step.

(Tilde can be reached at adamtilde@gmail.com)