Article: Where is justice for Bridget Agbahime?(Disturbing Image) 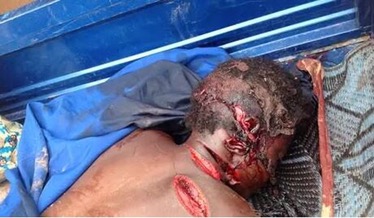 Indeed, for any keen observer of governance in post-colonial Africa, Nigeria must be a very depressing address. And this is more so for the simple reason that no country, in many people’s reckoning, has done so much as Nigeria in consistently consciously making itself an object of perpetual ridicule in the comity of civilized countries of the world.That explains why those who argue that Africa’s backwardness is a function of Nigeria’s pathetic leadership vision cannot be entirelywrong after all. Even Nigeria’sown citizens, who look up to their country to provide the required domestic and internationalleadership, have continued to be utterly disappointed and embarrassed in very many ways.


Take for example the case of Bridget Agbahime. On June 2, the 74-year-old kitchen utensils trader from Imo State was brutally attacked and killed at KofarWambai Market in Kano by aMuslim mob who accused her of blasphemy.According to reports, she was pounced upon and murdered after she refused to allow a Muslim manperform ablution in front of her shop. As expected, the circumstances of Bridget’s death sparked outrage within secular, Christian and progressive Muslim circles across the country and beyond, provoking once again that troubling question as to when these ignorant killings in the northern part of the country in the name of Allah would come to an end.

On behalf of President MuhammaduBuhari, Special Adviser on Media and Publicity, Femi Adesina, promptly issued a statement describing the incident as “sad and regrettable.” In the usual tone of such statements, it urged the people not to take the laws into their hands and affirmed that justice would be done in the matter.

On his part, Governor of Kano State,AbdullahiGanduje, also called a meeting attended by prominent personalities including state chairman of Christian Association of Nigeria(CAN), Rev. Ransome Bello, thehusband of the deceased, Pastor Mike Agbahime, of Deeper Life Bible Church, Igbo leaders in Kano, Islamic scholars and security agencies. At that meeting the governor named the prime suspect in that heinous crime as one AlhajiDauda. He said the killing was “unjustifiable” and that justice would be done in accordance with the provisions of the Nigerian constitution.

The Police corroborated the governor as regards Dauda.OlabisiOkuwobi, Assistant Commissioner of Police who was then Force Public Relations Officer, issued a statement saying two key suspects, Dauda Ahmed and ZubairuAbdullahi, were already in custody and would be speedily prosecuted. AddedOkuwobi: “In order to ensure a diligent and professional investigation the Inspector General of Police has directed the Deputy Inspector General of Police in charge of the Force Criminal Investigation and Intelligence Department (FCIID) to deploy the Homicide Section of the Department to immediately take over the investigation of the case and ensure a meticulous investigation and speedy prosecution of arrested suspects.”

Apart fromDauda and Zubair, the investigation led to the arrest of three more suspects namely Abdulmumeen Mustafa, AbdullahiAbubakar and Musa Abdullahi. The five suspects were charged at the Kano Magistrate court on a four-count allegation of allegedly inciting disturbance, culpable homicide, joint act and mischief.

And five months into the incident, more than enough time for Nigerians and the Agbahime family to have arrived at a closure on that act of bestiality, what did the people get? Just when they were bracing fora firm prosecution that will lead to conviction, they were treated to the familiar abracadabra that is peculiar to the country’s legal system. In what must go down as a classic judicial swindle, the chief magistrate, Muhammad Jibril, acting on the advice of the Attorney General of Kano State, discharged the suspects and terminated the case.

According to the Kano State government, “There is no case to answer as all the suspects are innocent.”Really? And this from a State whose governor had called the killing “unjustifiable” and vowed to go all out to ensure that the culprits are treated in line with the country’s laws? Where is the justice Buhari promised in his reaction to Bridget Agbahime’s killing? What the Kano government did to this case is not the kind of thing that should happen in a government that professes “change.”

Surely now, the widower,Mike Agbahime, and the entire Agbahime family must be heartbroken. It would not be surprising to hear that the man has suddenly developed some serious health problem, for this is the sort of perversion of justice that led to the death of Justice AtinukeIge, whose husband, Bola Ige,was assassinated at theirBodija residence in Ibadan in 2001. Sixteen months later, the woman died from a heartbreak resulting from glaring manipulation of justice by state prosecutors who deliberately messed up the trial of suspects arrested in connection with her husband’s gruesome murder.

This is not the first time blasphemy killings would occur in the northern part of the country. In 1995, in the same Kano, a young Igbo trader, Gideon Akaluka, was beheaded by Muslim fanatics who stormed the police station where he was being held for alleged blasphemy. The head was hoisted on a stick and used as trophy which the mob carried round the streets in a chilling victory parade.There was neither arrest nor prosecution.

In 2007 Christiana Oluwasesin, teacher and mother of two, was beaten to death by her own students at Government Day Secondary School, Gandu, Gombe State. The sixteen suspects arrested in connection with the crime were released without any charge. In addition to the Agbahime case, this year has also witnessed blasphemy killings in TalataMafara in Zamfara State, and Padongari in Rafi local government area of Niger State. In these two cases as in others, not one person was arrested and made to face the law.

Suffice to say that blasphemy killers in Nigeria, a secular, multi-ethnic and multi-cultural country are never brought to justice. Yet without justice there can never be peace. And the absence of peace means there is no unity. Agbahime’s case happens to be the first time an attempt, no matter how idle and unenthusiastic, has been made to arraign alleged perpetratorsof blasphemy execution.

But against all expectations, the case has decidedly been bungled by the government which ought to protect citizens,messed up in a manner that powerfully vindicates those who insist that Nigeria is not yet a nation, that much as the people desire to live together as one, there is an urgent need for a roundtable meeting of its various stakeholders to fashion out a modern nation by agreeing on terms for the people’s coexistence. Call it whatever name, Nigerians has to work towards arriving at an acceptable framework that determines the basis of a much desired unity in a re-invented country.

A cornerstone of that framework must be justice for all, regardless of your background or where you come from.As it is now, no matter what any Nigerian leader at whatever level preaches about Nigeria, with the way they have been denied justice,the Agbahime family, or the children of Oluwasesin, for instance, will never, ever feel that they belong to this country.

But this government can still redeem itself and that is what it should do by revisiting the Agbahime case and making sure those who needlessly killed that woman are truly punished. Otherwise, not only that this country will continue to be a laughing stock in the eyes of the world, one would be persuaded to queue behind those who still argue with candid vehemence that we are yet to have a country.