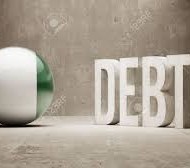 The conspiratorial supports given to the Buhari Administration by the attentive segment of the Nigerian Public, as it concerns its plans to mortgage the future, image and development of Nigeria internationally by way of securing whopping $30Billion loans from a number of regional and international lending institutions; is not only a clear indication that anti democratic forces are at work, but also another dangerous move to throw Nigeria into perpetual darkness; a state of intractable comatose. It remains our firm position that the loans being sought are for crooked and unpatriotic reasons.