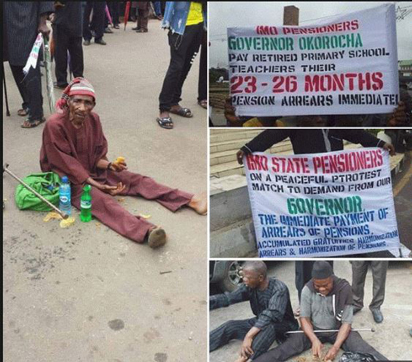 An Owerri-based private legal practitioner, Barr Emperor Iwuala has said that no court of law would enforce the recent undertaking the Okorocha government is allegedly subjecting pensioners in Imo State to before payment of pensions.


Barr. Iwuala said this in a public statement he issued to the press recently. The statement reads:

‘Pension is fixed and regulated by law. It is a regular payment made during a person's retirement from an investment fund to which a retiree had contributed to during his working days. It also includes money statutorily set apart by the employer for the benefit of the retiree. In other words, it is a long term saving regulated by law which includes money deducted from employees’ emoluments while in service. It is like savings in bank which a retiree is entitled to draw from as at when due.

Declaring it an illegality Barr Iwuala said that the courts would not honour the said undertaking:

‘Then the question is what is the implication of a retiree who signs the said undertaking of Governor Okorocha’s government? From my little knowledge of law of contract, a contract is void if it is offensive to public policy, statutory provision, morality and good conscience. A contract is also void if it is made under undue influence or duress. It is unenforceable if the contract is harmful to social contract and economic interest of the community, promotes illegality or fraud. However, it is my opinion that the said undertaking is guilty of almost all the above vitiating elements of a contract and therefore not likely to be enforced by any court of law.

On the way forward, the activist said that the pensioners should go ahead and sign the document:

‘Be that as it may, it is clear that the said state government does not want to pay pensions in full. Nevertheless, if signing the malicious document will make the government pay pension, let the retirees sign the document and collect what is paid to them. But they should bear in mind that whatever they receive in the circumstance of the undertaking continues to be part payment of their unpaid pensions and nothing more…’, he summed up.
Posted by PublicInformationProjects at 05:53