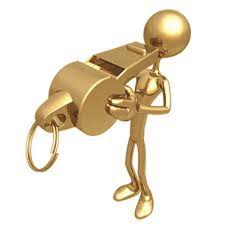 President Buhari’s new policy on whistle-blowing is revolutionary. Its goal is to broaden the attack on corruption by encouraging the general public to expose corrupt practices. The government will in turn reward those whose revelations result in recovery of funds or assets.  The mere fact that the corrupt arm of the Nigerian Senate is already angling to oppose the initiative is a whistling indication that the policy is geared towards the general good.


But there is a critical problem beyond any Senate shenanigan.

The seemingly lack of transparency on the current anti-graft war remains a tottering can of worms. For starters, President Buhari embraced a unique kind of plea bargain, whereby corrupt individuals could secretly return looted funds or other assets. It was believed, and understandably so, that such compromise was the most expeditious way to recover the funds needed to address immediate national needs, especially considering that the president inherited a hopeless treasury as well as a receding economy. Plus, remember, exhausting the standard legal process cannot be a prudent option in a country where the courts are notorious for interminable delays of corrupt cases.

Sadly, the pattern of secret arrangements has led to mounting charges of selective justice or what have you. Not surprisingly, it is already casting a shadow over the new policy on whistle-blowing. In fact, there is a palpable confusion on where to begin and how the whole exercise will end.

Tracing corrupt proceeds among Nigerians, of course, is not a tall order. For corruption in the country is endemic, with its leaders never lacking in folly, always flaunting phony affluence every chance they get. Moreover, the corrupt proceeds are brazenly displayed across the globe in the form of overnight huge bank accounts, private jets, exotic cars and mansions—starting from the villages, urban areas, to foreign enclaves. These are not hidden at all. Yet, even if the masses know where to begin in the whistle-blowing effort, they may still feel reluctant to do so.

According to a statement from the Ministry of Finance, to be considered, a whistle-blower is required to “provide specific and fact based information such as what occurred, amount involved, who was involved and dates of occurrence.”  The whistle-blower “must have provided the government with information it does not already have and could not otherwise obtain from any other publicly available source to the government” It adds that false or misleading information “will be referred to the enforcement agents for investigation and possible prosecution.”

Please grant me the indulgence and carefully go through the above paragraph one more time.

You might have just learnt, as I did, that the requirements are complex and call for a great deal of effort as well as risk on the part of the whistle-blower, which is quite in order. The rigorous demand can essentially dissuade mindless peddlers and hearsays. But such complexity equally begs the following questions:

The answer to these questions is simple. President Muhammadu Buhari should first do the needful and fulfill, without further delay, his promise to make public the specific details of the rich and famous who looted our country dry. If the war against corruption is to endure, the masses deserve to be kept abreast of the present or future leaders involved the assets in question, collaborators, and consequences, if any. These expectations are in line with Nigeria’s Freedom of Information Act and the Open Government Partnership (OGP) which the country signed unto not long ago.

In a similar vein, the team on whistle-blowing should constantly update their web portal with a comprehensive list of all cases under review, whether alleged or proven. The data ought to show the date and time the documentary evidence was entered, time dispensed, and nature of the outcome. After all, there are consequences for false information, and any accused person in Nigeria is presumed innocent until proven guilty. Moreover, Nigeria must not continue to bestow special treatment to the politically exposed persons accused of corruption while the rights of the ordinary citizens are trampled upon everyday without restraints.

The defense commonly offered by the administration for the undue leniency is that publishing the names of alleged looters may jeopardize investigations or the special plea arrangements. But the excuse is pure baloney. If shielding alleged looters is truly a panacea for corruption, it is profoundly obvious that we did not start on time. As for plea bargain, the idea is ultimately cost-efficient, but it is typically for reduced sentences. It must not include the current habit of hiding thieves or allowing those who forfeit a portion of their stolen assets to go scot-free.

It can be convenient to shift the blame to the judiciary or the lack of manpower needed to embark on a comprehensive approach to whistle-blowing. But we must resist the temptation of continuing to brandish such banal excuses as solutions. Instead, it has become critical to realize that being able to overcome obstacles is where true leadership comes in. President Buhari should, therefore, persevere and find ways to influence through the institutional frameworks essential for an effective anti-corruption war.

A compelling step is to complement the whistle-blowing programme by establishing the special courts needed to expedite corrupt cases. The anti-graft agency can follow by recruiting and training tens of thousands of jobless graduates adequate to wage a full-scale offensive combing from the 774 local governments upward. After all, the corrupt proceeds have been so overwhelming for the agency that many visible ill-gotten assets, such as the shady castles located in the various villages, are ironically ignored.  Besides, apart from immediate job opportunities, any serious war against corruption in Nigeria not only pays for itself but can even compete as a top revenue generator for awhile.

Overall, the whistle-blowing initiative deserves every commendation. At the same time, even as the inherent plan to conceal the details of the corrupt elements may appear tenable short-time, it is counterproductive long-term. In short, the prevailing kid-glove approach is already beginning to create the false impression that corruption is suddenly insoluble in Nigeria thereby inadvertently aiding and abetting the crime itself. True.

(Ogbonnia can be reached via: SKCOgbonnia@firsttexasenergy.com)
Posted by PublicInformationProjects at 00:40