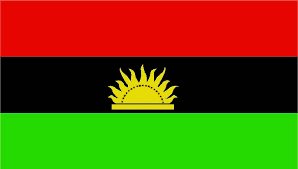 By S. Okey Mbonu
Can One Kill an Idea Through Coercion?

“Injustice anywhere is injustice everywhere”, and “he who holds a man down stays down” (Martin Luther King).  Slowly but steadily, Nnamdi Kanu’s detention in Nigeria, and the IPOB (Indigenous People of Biafra) cause, are beginning to resonate around the world, propelled by the phenomenal presence of the Nigerian and Igbo Diaspora around the world, especially in the US.


It took a while for Igbo elites in the US to figure out Kanu, IPOB, and the myriad of recent agitations from Nigeria.  On the face of it, the right to free speech is usually sacrosanct in any self-professed democracy, including Nigeria.  Therefore, criticizing the government of the day, should not ordinarily lead to treasonable charges.

However, now that the Kanu and IPOB matter are beginning to sink in, many in the Diaspora are seeing Kanu’s diatribes as legitimate expressions of free speech, bordering on public criticism of national failures in Nigeria; even though the tone should not be personalized against any individual person or official.

Any half-way decent lawyer will tell you that under the English common-law, which Nigeria and other English common-law adherents operate, there must be satisfactory proof of the elements of mens rea, and actus rea (the thought, followed by the action), before one finds a defendant culpable for violations of law.

Kanu and IPOB’s followers’ statements of their perception of marginalization in Nigeria are not unusual; especially since the publications were not followed by an actual armed rebellion.  Boko Haram is on the contrary, an armed rebellion, which constituted a clear and present danger to Nigeria.

Nigeria may currently be on a perilous slope if caution is not taken.  A peaceful protest or dissent from civil society groups should be seen as constructive criticism, not a cause to clamp down on segments of the population.  As Nobel Laureate Wole Soyinka stated “The Man dies who stays silent in the face of tyranny.”  The government should not use a heavy-handed security force to muzzle dissent in a democracy.  Wole Soyinka has also said that, “You cannot kill an idea”; IPOB is an idea, you cannot kill an idea that has taken root in the psyche of millions of people.

Buhari’s Gaffe
President Mohammed Buhari unwittingly tried to deal a fatal blow to the discordant tune of the new Biafra movements, when he spoke publicly about the matter; during a media chat in early 2016.  During the media chat, he injected his personal opinion on a matter that was already subject to legal adjudication.

President Buhari implied inter alia, that withholding bail from Kanu was valid, because Kanu was charged with serious crimes.  When questioned further Buhari stated, “Kanu was carrying both Nigerian and British passports (apparently Kanu was a dual citizen)”.  Actually, Nigeria’s constitution allows for dual citizenship; therefore coming into Nigeria carrying two national passports was not a violation of Nigeria’s current laws, and certainly not “treasonable".

Nigeria’s attorney general should have advised the presidency appropriately on dual citizenship and other matters, in regard to the Kanu matter.  Further, there are senior advocates in Nigeria who should be speaking publicly about these matters as well.  It is reasonable to expect that Nigeria still operates on sound legal reasoning, and the rule of law from her voices of learned jurisprudence.

Is everyone cowering because their bread and butter may be on the line? Where are the consciences of the bar and bench in all these? Have Nigerians become completely timid since Gani Fawehinmi passed?

The Danger of Disobeying Court Orders
A society that has adopted the rule of law, cannot deny any person his or her liberty without just cause.  The president, acting on a whim, cannot ask the security agencies to “further detain” a person, whose charges were initially dismissed; or who was previously admitted to bail, by a competent court.

We have it on factual authority, that a competent court initially dismissed charges against Kanu.  However, the DSS acting on orders from above, decided to hold Kanu “further” on the same matter, contrary to the legal principle of “Res Judicata”, and without sufficient legal justification.  This is now unlawful detention.

The above is troubling, more so because a substantial number of the Nigerian elite inside Nigeria, have stayed strangely quiet in the face of this injustice.  Many past and present political leaders, and the elites of both northern and southern Nigeria, have been quiet.  Injustice thrives not only because bad actors in governance have perpetuated injustice, but rather because the people who should speak-out have refrained from doing so.

The great danger of not speaking out is that it empowers a bad actor; and slowly the same act could be perpetrated against other persons, for insufficient legal reasons; until the bad actor acquires total power, and begins the decimation of all voices of reason, and democratic structures.  Unchecked powers allow dictatorships to take hold.

We believe President Buhari has professed his commitment to democratic principles.  It is time for him to prove what he has professed, by backing away from a personal stance on matters of this nature.

The Time for Persons of Integrity to Speak-out
We trust that all Nigerians of integrity will begin to speak out on the injustice of the Nnamdi Kanu issue now, before it becomes too late.  No nation in history has ever survived with the executive branch of government usurping powers that is not theirs to possess, especially judicial power.  That was precisely how the Roman Empire, under Augustus Caesar, went down; after Augustus Caesar assumed absolute power over Rome.

The Anti-Corruption Campaign Should Continue
Many of us have come to respect President Buhari’s anti-corruption agenda; because to be fair, the previous government maintained a “laissez faire” attitude to corruption.  A government where billions of dollars of a defense budget could be shared callously by public officials and their cronies would have eventually ran the country aground.

For the record, let us not confuse this Kanu, IPOB, and other civil rights matters, with the several criminal cases of corruption leveled against several politically exposed persons (PEP’s).  The many former and present public officials, including those who sent troops to die in battle, while pocketing billions of dollars of the defense budget, need to face the consequences of their actions.  There are bona fide mountains of real direct evidence stacked against these other persons, whether they are southern or northern Nigerians.

Will Nigeria survive another Civil War?
Another full-scale civil war may decimate Nigeria irreparably.  The descent into heavy-handed use of government coercion, against powerless citizens, including killings at IPOB rallies is worrisome.  The situation is now spiraling into other issues, amid rising calls for restructuring of the polity, insecurity, economic recession, and political instability; all of them tearing at the fabric of Nigeria.

In the event that another civil war arises out of the current discontent in Nigeria, it will certainly not be a repeat of the previous lopsided civil war, where most of the major powers of that day supported one side, over a small enclave.

This time the world is a vastly different place.  The dynamics, including the permanent presence of Nigerian Diaspora of a certain ilk, in some of the most influential nations in the world, will surely ensure that a war will not end the way the previous war ended.

We hope Nigeria does not go in the direction of a civil war again.  The stakes are too much for 180 million of Sub-Saharan Africa’s most talented people.  There must be a better way to either resolve these matters, or reach an agreement for regions to go their separate ways by civil agreement.