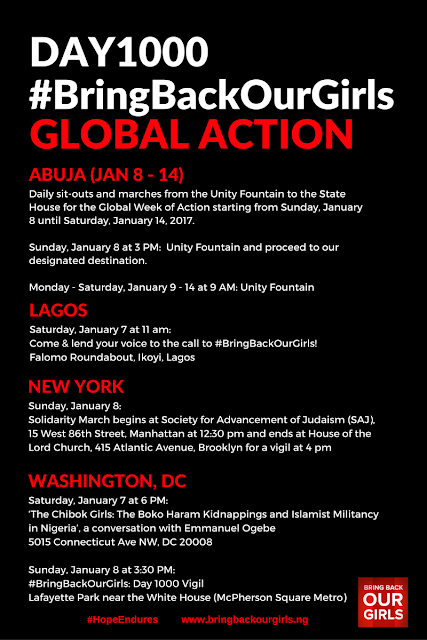 On Sunday, January 8, 2017, it will be 1,000 days since 276 schoolgirls were abducted from their school in Chibok, Borno State, Nigeria by terrorists on the night of April 14, 2014. 57 girls escaped within days of the abduction and 219 were taken into captivity.


Since then, 4 girls have been found – September 24, 2014; May 18, 2016; November 5, 2016 & January 5, 2017. 3 of them have infants. The Federal Government with assistance from the International Committee of the Red Cross and the Swiss Government successfully negotiated the release of 21 girls on October 13th, 2016, one of whom has an infant. In the two years and nine months since their daughters were snatched away, 19 parents have died. 195 Chibok Girls remain in the hands of terrorists.

Ten weeks ago when the 21 Chibok Girls returned, the Nigerian government said that based on their discussions, 83 more girls would return ‘soon’. Nothing has been said of them since that time. The BBOG Movement worries that the Nigerian government has, once again, relapsed to the same complacency, lethargy, and inertia that has been recurrent on this tragedy. What else explains the fact that despite all assurances that the release of another 83 Chibok Girls is being negotiated, there has been no further communication on the status of their release?

We are doubly disappointed that the Federal Government contradicted itself by the recent declaration and celebration of the capture of Sambisa Forest as the end of the war. This action is contrary to the pledge that Mr President and the military have made repeatedly that they would not declare victory without the rescue of our Chibok Girls and all other abducted victims of terrorist abduction. Sambisa’s 'Camp Zero' is the same stronghold in which the Federal Government stated that the girls were being held and the 21 released were from there. Should parents, communities, Nigerians and the world assume that the Federal Government has given up on the Chibok Girls and other abductees?

As with the Jonathan administration, the Buhari administration’s response to issues about the Chibok girls is representative of its handling of other issues – insecurity, welfare of internally displaced persons, military welfare, corruption and poor governance.

Painfully, #Day1000 of their tragic abduction is in two days and there has been no status report provided by the Federal Government. As such, we are constrained to resume our various activities to mark this tragic milestone, expecting Mr President to regard this #Day1000 milestone as an overdue time to bring this horrific saga to an end. We shall therefore carry out a series of activities for a period of one week to compel our Federal Government to accelerate the decision and actions necessary to bring back the rest of our Chibok Girls to an anxiously waiting nation. Our actions shall also serve to remind Nigerians and the international community about the continued state of insecurity in Nigeria.

Washington, DC: Helon Habila, author of ‘The Chibok Girls: The Boko Haram Kidnappings and Islamist Militancy in Nigeria’, will be in conversation with Emmanuel Ogebe, a Nigerian human rights lawyer and surrogate father to a few of the escaped girls who now live in the U.S. 5015 Connecticut Ave NW, DC 20008. 6pm.

Monday, January 9th – Day 1,001
Abuja: Solidarity March focused on Internally Displaced Persons (IDPs) - our Chibok Girls are themselves IDPs wherever they may be. The condition of IDPs in the Northeast is a humanitarian tragedy of immense proportion as reported by several agencies. Our Government is not responding with the required urgency.
Unity Fountain. 3pm.

Tuesday, January 10th – Day 1,002
Abuja: Solidarity March focused on Military Welfare - our Nigerian troops at the frontlines of the counter-insurgency deserve better. Videos have emerged where they have been seen scrambling for basic supplies like water. They allege that many are still ill-equipped and that some do not have arms, ammunition and proper clothing for the harsh weather. Some have been unjustly sentenced to life imprisonment for mutiny/treason for declining to fight without arms.
Unity Fountain. 3pm.

Wednesday, January 11th – Day 1,003
Abuja: Solidarity March focused on Corruption / Poor Governance - There is corruption and poor governance in all sectors of our society including in the judiciary. The situation of the IDPs and our troops is a manifestation of this cancer. Corruption and poor governance created the enabling context for our girls to be abducted. The same cancer of corruption is a key reason why they remain in captivity 1,000 days after. The recent revelation about the N500million budgeted for the rebuilding of the Government Secondary School, Chibok is further proof of this menace. The only sustainable way to fight corruption is transparency at all levels of government and immediate prosecution of defaulters.
Unity Fountain. 3pm.

Thursday, January 12th – Day 1,004
Abuja: Solidarity March focused on Endangered Education - Our Chibok Girls were abducted in their school. Education, especially girls’ education, is clearly under attack in Nigeria. We must unite to counter this and ensure that our children are safe and feel safe in school.
Unity Fountain. 3pm.

Friday, January 13th – Day 1,005
Abuja: Solidarity March focused on Girl-child Vulnerability - Our Chibok Girls represent the horrors of the violence that a girl-child is exposed to, and many times undergoes. Another recent example is that of Habiba Ishiaku, abducted and forcefully "married" at age 14 without her parents' knowledge, and 'converted' to another religion. This was done by the authority of the Emir of Katsina and the Katsina Emirate Council with the full knowledge and support of the Nigerian State.
Unity Fountain. 3pm.

Saturday, January 14th – Day 1,006
Abuja: Solidarity March focused on Insecurity – In Zamfara, Zaria, Jos, Enugu, Agatu, Southern Kaduna and other places, killings have taken place and continue with no consequences and no end in view. All Nigerian lives matter. No Nigerian is more Nigerian than any other Nigerian. We insist that our Federal Government must take every action necessary to restore dignity to EVERY Nigerian life.
Unity Fountain. 3pm.

From the book review to the marches, these issues have connections with and are relevant to our Chibok Girls and the #BringBackOurGirls advocacy. People of conscience must stand up to be counted. We must keep demanding that our Chibok Girls and all other Nigerians abducted by Boko Haram are rescued and united with their families.

What are we demanding? BRING BACK OUR GIRLS NOW AND ALIVE!
What do we want? RESULTS FROM THE RESCUE OPERATION!
What are we asking for? THE TRUTH, AND NOTHING BUT THE TRUTH!
When will we stop? NOT UNTIL OUR GIRLS ARE BACK, AND ALIVE!
When will we stop? NOT WITHOUT OUR DAUGHTERS!
Where are we from? CHIBOK!
Where are we from? NIGERIA!
What are we fighting for? NIGERIA! THE FIGHT FOR THE CHIBOK GIRLS IS THE FIGHT FOR THE SOUL OF NIGERIA!

Kindly join us, and/or get in touch via info@bringbackourgirls.ng.
For all our events, we encourage participants to wear red, which is a symbol of danger.

Signed:
For and on behalf of #BringBackOurGirls