News Release: Fundamental Minuses In The Statement Of The Catholic Bishops Conference On Killing Of Christians In Nigeria 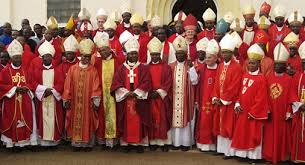 Conference On Killing Of Christians In Nigeria
It is no longer hidden or news that Christian leaders have continued to compromise and endanger the Christian Faith in Nigeria. This they do through cowardice, ethnic bias, denominational mercantilism and merchandizing; and “ritualized presidential or gubernatorial cola nut” or “brown envelope”. Once any of these is the case, such Christian leaders instantly lose their canonical independence, sense of reasoning and judgment; which result in endangering and compromising of Christian Faith and Worship in Nigeria or any part thereof.


It is recalled that the leadership of our organization had on 26th July 2016 issued a strong worded statement, titled: Killing Of Christians And The Rise Of State Jihadism In Nigeria and cited the 2015 report of Open Doors International, among others, which empirically noted that the attacks against Christians have become rampant in the North and in 2014 alone; there were 4,028 Christian killings and 198 attacks on churches, which nearly doubled those of the previous year. The Open Doors International also stated in its report that 1.3 million Christians had fled their homes to safer places to avoid being hacked to death by religious fanatics and that between 2009 and 2014; a period of five years, 11,500 Christians were killed and 13,000 churches and 1500 Christian schools destroyed in Boko Haram insurgency.

We had also in our Christmas Day Message to all Christians in Nigeria, dated 25th December 2016, identified Christian Leaders in Nigeria, among others, as a major threat to safety and growth of Christianity in Nigeria. We further held that threats to Christian Faith in Nigeria have alarmingly worsened and become State actor and non State actor oriented; meaning that violent attacks on Christians are driven and reinforced  by the State’s Islamist policies and actions which have intensified since late May 2015.

It also means that Christians are facing attacks directly from Government through its highly divisive and selective non secular policies and actions including deliberate failure of the Buhari Administration and its security agencies to protect Christians and their holy places of worship under attack and fish out the culprits and bring them to justice. On the other hand, Christians are also facing steady and well coordinated attacks from government backed non State violent entities particularly the Nomad Fulani terrorists; reminiscent of the atrocities of the Sudanese Government backed Janjaweed in Darfur Region against defenseless black Sudanese.

Since the issuance of the two statements of ours under reference, we have carefully watched and studied reactions of the Buhari Administration and its security agencies; the Government of Kaduna State as well as that of the violent and terror Nomad Fulani group through its mother body: the Miyatti Allah Cattle Breeders Association of Nigeria. We have also read and carefully studied the text of the December 30th 2016 press conference of the Catholic Archdiocese of Kafanchan in Kaduna State, in which it shockingly revealed that 808 mostly Christians were killed in few months in late 2016 in Southern Kaduna alone with 57 others injured, 53 villages and 15 churches destroyed.

The leadership of ECWA Church in the State had earlier addressed a press conference in which it shockingly revealed that not less than 38 of its members were lost in the first six months of 2016 with several of its holy places of worship destroyed. Both the ECWA Church and the Catholic Archdiocese of Kafanchan strongly accused the Government and Governor of Kaduna State and federal security agencies particularly the Army and the Police as complicit in the menacing butcheries.

We have as well read and carefully studied a press statement issued by the Kaduna branch of the Miyatti Allah Cattle Breeders Association of Nigeria, in which it shamelessly and defiantly claimed responsibility for the massacre and primordially, crudely and barbarously labeled it as a reprisal for the “post 2011 general violence” and killing of their cows. To the extent that Nigeria is now a social clime where lives of cows have become more sacred, important and equated with human lives is shocking, alarming and deafening. This further exposes the level of primitivism that has befallen Nigeria under the Buhari’s civilian Administration.

The Nigerian Army and the Nigeria Police Force’s reactions by raising indiscriminate mercantilist  and extortionist roadblocks in the affected areas under phantom security circumstances are also noted with serious concerns; likewise the biased and pro Islamic statement of the Inspector General of Police, Alhaji Ibrahim Kpotum Idris in which he shamelessly stuck himself disputing the number of Christians killed in Kaduna by government backed Nomad Fulani terrorists cited in the press conference of the Catholic Archdiocese of Kafanchan. Till date, the culprits are on the prowl with utter alacrity while the IGP is busy shamelessly running from pillar to pole instead of fishing out the culprits and bringing them to justice.

In all these, the most shocking and disappointing of all was the official statement of the Catholic Bishops Conference of Nigeria (CBCN), through its President, Archbishop Ignatius Kaigama, and dated 5th January 2017. The statement of the top Catholic Clergy body is considered by the leadership of International Society for Civil Liberties and the Rule of Law as totally cowardly, empty, watery, shallow and un-apostolic. Further lacking fundamentally in the statement are statistics and specificity. The CBCN’s statement is also ethnically biased and rubber stamping. This is on account of the fact that the President of the CBCN is a northerner and possibly working to protect the interests of the Northern Muslim controlled Federal Government of Nigeria.

This was similarly seen recently when the local head of one of internationally respected rights groups nearly frustrated and messed up the release of its report on Nigeria simply because he is a northern Muslim. In another international rights group that has a Nigerian as its researcher, similar ethnic bias and selectiveness are clearly manifest. Strangely and curiously too, the Presidency has issued a similar statement, dated same day, which is utterly spineless, grossly belated and diversionary.

We had expected the Catholic Bishops Conference of Nigeria to have issued a strong worded statement with available statistics, demanding for a total halt to violent attacks on all Christians and destruction of their holy places of worship in Nigeria or any part thereof, with statistical references to Plateau, Nasarawa, Benue and Kaduna States.

The CBCN is also expected to have strongly condemned the complicity of the Governor and Government of Kaduna State and gross incompetence and selective security handling styles adopted by the authorities of the Nigerian Army and the Nigeria Police Force in handling the Nomad Fulani terrorism organized and launched against Christians in Nigeria using the auspices of the Miyatti Allah Cattle Breeders Association of Nigeria.

The leadership of CBCN and other leading Christian leaders in Nigeria are further expected by this organization to have challenged the Buhari Administration to disclose to them or publicly its Government’s policy direction in handling the secularity of Nigeria and its application in the command and rank and file compositions of the Nigerian Army, Nigeria Police Force, Nigerian Navy, Nigerian Airforce, the State Security Services, the Nigerian Custom and other members of the Nigerian Armed Forces.

Where the CBCN and other Christian leaders independently and credibly found existence of a different and possibly pro Islamic or Jihadist policy direction or secret operational or regime code, the CBCN and other leading Christian leaders can deploy all non violent measures at their disposal including All Christian Sunday Street Matches or Processions throughout Nigeria to get the dangerous trends reversed ad infinitum and the Buhari Presidency revert to constitutionalism and secularism..

While we commend the Catholic Archdiocese of Kafanchan and the ECWA Church in Kaduna State for their courage in speaking out and calling spade a spade; that of the Catholic Bishops Conference of Nigeria is totally condemned. We are also not surprised at leprous and medicine-after-death reactions of the Presidency and the authorities of the Nigerian Army and the Nigeria Police Force. This is because we never expected the contrary from them having steadily aided and abetted with reckless abandon most if not all the violent attacks on Christians in Nigeria in recent times including heartless destruction of their holy places of worship and total failure to fish out the culprits including key leaders of the Miyatti Allah Cattle Breeders Association of Nigeria.