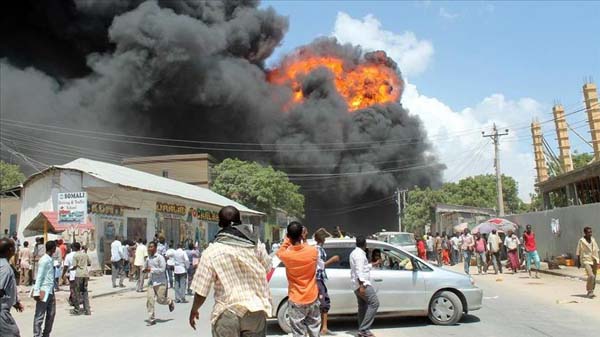 Nigeria’s Government grossly belated and reprobated ownership of the high death toll following its Air Force wilful bombing of the Rann IDP Camp in Borno State, Northeast Nigeria on 17th January 2017; is a clear case of commission of War Crimes and violation of the UN Purposes and Principles and the Fundamental Rules of the International Law and Humanitarian Principles- Emeka Umeagbalasi, Criminologist & Graduate of Security Studies and Board Chair-Intersociety Nigeria.


Since August 2015, the Nigerian security forces or Armed Forces led by the Nigerian Army and the Nigeria Police Force; joined by the Presidency, have continually bastardized and corrupted the concept of the Rules of Engagement of the Geneva Conventions or Laws of War of 1949 under the UN System. The bastardization and corruption have been carried out by way of violent crackdowns on unarmed and defenceless citizens engaging or agitating non-violently for their constitutional, regional and international rights to religious and ethno-racial self determination through night vigils and street or road processions, matches, rallies and protests; other than armed rebellion or conflict. The mass killings by Nigerian security forces following street rallies, processions and protests by millions of unarmed citizens have been criminally labelled “exercise of their military mandates under the Rules of Engagement”.

Again, since late May 2015 till date, the present sixth civilian central Government in Nigeria has steadily and grossly threatened and undermined the nobility and aristocracy of civil government and reduced same to government founded on falsehood, rascality and gangsterism. Expressions and explanations of government policies and conducts have been mired in confusion, misdirection, criminal spinning, misrepresentation, executive recklessness and rascality; to the extent that out of every five executive explanations or statements made on major issues of public concerns, four are founded on falsehood or untruth till date.

It is recalled that the Nigerian Armed Forces particularly the Nigerian Army and the Nigerian Air Force have since 2009 engaged in counter insurgency operations against the Boko Haram terrorists in the Northeast Nigeria with attendant gross rights abuses. Camps for the internationally displaced persons (IDPs) were created and clearly mapped and marked. Severally the Nigerian Military had claimed that it was very mindful of civilian populations or settlements in its air attacks in the area. In December 2016, the Army Chief, Lt Gen Tukur Buratai declared total victory against Boko Haram terrorists and claimed that its stronghold and the Sambisa Forest have been totally cleared of the terrorists. Hundreds of arrested and held Boko Haram terror suspects have also been released as uninvolved or repentant.

Shockingly, on 17th January 2017, strongly suspected government influenced news broke out, claiming that “there was a mistake air bombing of an IDP camp in Borno State claiming few lives and scores of injuries”. Some aid agencies most likely under pressures from the Nigerian Government later disclosed that “54 citizens died including some aid workers with dozens of others injured”. Almost a week later, the Chairman of Kala-Balge LGA of Borno State, where the wilful bombing and killing took place; Babagana Malarima, courageously disclosed publicly that “they buried 234 citizens excluding two that just died in Maiduguri Hospital”. Over 90 others were critically injured; and barely two days ago, the Presidency accepted the death toll figure as given by the LGA Chairman.

Consequently, we at International Society for Civil Liberties and the Rule of Law see the wilful air strike and accompanying killing of 236 defenceless and war traumatized citizens as nothing short of war crimes and gross breach of the Rules of Engagement under the UN System. Till date, the Minister of Defence, National Security Adviser, Minister of Interior, Chief of Air Staff, Chief of Defence Staff and Chief of Army Staff are still hanging on to their official positions as if nothing has happened. The Presidency, on its part, appears busy fighting to cover up the massacre and no serious or credible international investigation has been carried out. The international aid agencies working in the area particularly those that lost scores of their staff in the wilful air strike have also done little or nothing. It may likely be that they are under intense pressures from the Presidency to shut up and cover up.

Technically and expertly speaking, the modern journey to the enactment of the Laws of War or Geneva Conventions under the present UN system started as far back as in 1864 when the Swiss Government convened the first international conference in Humanitarian Law, leading to the first Geneva Convention for the Amelioration of the Conditions of the Wounded in Armies in the Field. The Laws of War or Geneva Conventions simply mean the rules guiding the conduct of the war, the war itself and its aftermath; violation of same amounts to war crimes on genocide.
Preceding the Laws of War or Geneva Conventions is the concept of Just War or why and how wars are fought. The three main facets of the concept or theory of Just War are: Jus Ad Bellum-justification and ground for going to war; Jus In Bellum-ethical rules of conducts during the war such as ethical standard expected of soldiers and other combatants in war time: i.e. rules of engagement; and Jus Post Bellum-regulations of how wars are ended and transition from war to peace. These were fully incorporated into the Geneva Conventions by way of rules of engagement, legitimate use of force, self defence and concept of non-military necessity.

One of the gravest violations of the Geneva Conventions or Laws of War is attack or fatal bombing of civilian population or settlement in conflict affected areas by warring parties particularly the host political territory and its armed forces. This is also called “attacks on non military necessity”. It is expressly a commission of war crimes with monumental legal consequences on the part of the defaulting party. Mass killing of civilians who are unarmed and defenceless in non war situation expressly amounts to crimes against humanity.

Nigeria as a leading UN Member-State from Africa is morally and legally bound by the Principles of the United Nations; which clearly states as follows: The principles of the UN are to save future generations from war, reaffirm human rights, and establish equal rights for all persons; in addition to promotion of justice, freedom, and social progress for the peoples of all of its member states.

Nigeria is also bound by the Customary International Law under UN System particularly those that are inviolable by virtue of their principle of “substantial uniformity by substantial number of States” or “Opinio Juris” (i.e. a general belief binding on all Member-States that a non-treaty is legally binding on States); and importantly, the principle of “Jus Cogens” (i.e. absolute rules of general international law binding on UN Member-States for which no derogation is permitted). These include prohibition on illegitimate use of force, genocide, war crimes, and crimes against humanity, slavery, torture, etc.

We hereby call for extensive international investigations into the air strike killing of 236 defenceless citizens on 17th January 2017 in Borno State, Northeast Nigeria. We reject any form of “internal investigation” by the Federal Government of Nigeria led by Retired Major Gen Muhammadu Buhari or any of its military or civilian agencies. We consider such investigation, if any, as a clear case of “being a judge in its own case”. Besides, the present Federal Government of Nigeria grossly lacks moral standing to conduct any form of investigation and if it is truly concerned over the wilful mass murder; then it must sack as a matter of uttermost immidiacy the Chiefs of Air Staff, Defence Staff, Army Staff, the National Security Adviser, the Minister of Interior and the Minister of Defence.

We specifically call on the United Nations Secretary General and the Security Council to rise to the occasion by competently exercising their mandates in Article 24 of the Chapter Five of the United Nations by ordering for extensive investigations into the wilful mass murder. The authorities of the International Committee of the Red Cross and the United Nations High Commissioner for Refugees are also called upon to carry out similar extensive investigations into the mass murder including the killing of scores of their aid workers. Nigerians also want to know the age bracket, gender, ethnic and religious identities of the slain defenceless citizens.