Article: The Urgency Of Political Organization And Purposeful Mass Action 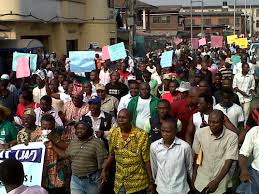 It is no longer news that the Nigeria economy went into and stayed firmly put in recession during 2016 with 4 consecutive quarterly negative GDP growths.


However, this dive into free fall did not start in 2016. From about 2010 onwards the economy has been declining, with annual GDP growth declining from an average of about 5% to about 1% in 2015, before dropping precipitately into negative region at the beginning of 2016.

So whereas it is true that the economy contracted in 2016, the decline and shrinking of the economy began long before that.

So why was it necessary to recount the foregoing as a way of introducing the subject of mass popular discontent, and the coming a period that can be and will become described as a season of discontent?

It is necessary because it is important to underpin the fact that any serious person and or political party aspiring to govern this country or any other country for that matter ought to be able to understand, identify and analyse the trends in the overall development trajectory of the country and people over which it wants to superintend before ever even going to seek for the active consent of the people to govern.

A serious political class and political party will thus be armed by an enlightened understanding of the country and the people, including the trajectory of their overall development before presenting itself as an option in the governance of the country.

The point being made obviously is that the present administration, like the one it replaced after the 2015 landmark general elections was never prepared to governance, it was not prepared for governance.

The very basic foundation of preparation to govern, preparation for governance can be nothing other than a serious attempt to understand the challenges facing a people, and the articulation of a set of policies and strategies that can be deployed towards addressing the challenges.

And even up till now, 21 months after being inaugurated, and nearly 23 months after being declared winners of the 2015 general election, the self-proclaimed ‘new ‘Governing’’ Party and the PMB administration still do not have a shared, coherent and cohesive understanding of the nature of the challenges that confront us, nor have they been able to articulate a clear, coherent, strategic vision and overarching National Development Plan framework and program, that is shared and collectively promoted and deployed towards addressing those problems.

And it is not as if they have not been presented with several opportunities to articulate and development such a plan.

When it was known and anticipated that the economy was going into recession, there was an opportunity even then mid 2016 to quickly articulate such a national economic stabilisation, and recovery plan; But the opportunity was never seized.

When the regime was sworn in and it became fully aware of the nature of the morass into which we had been plunged, it could have utilised the opportunity for preparing the 2016 budget to develop such a plan. It could have used the opportunity of developing the Medium Term Expenditure Framework [MTEF], the Medium Term Sector Strategies [MTSS], and the Fiscal Strategy Paper [FSP] towards the 2016 budget to actually develop a medium term National Economic and Human Development Plan and implementation plan, with the annual budgets becoming the investment plans aimed at implementing this medium term program.

And while we are still on this subject a collection of projects is not a strategic plan, because it demonstrates nothing about how goals and objectives are articulated and hope to be realised.

And furthermore even uptil now the promised so-called National Economic Recovery and Growth Plan [NERGP] which was supposed to be the basis of the 2017 budget is yet to be released in any serious articulated manner. We do not have such a document to engage with. What we have had are pronouncements which suggest that a hurried inelegant rehash of the 2016 Strategic Implementation Plan [SIP] for the 2016 budget is now being proclaimed the NERGP.

The result of all of these ill preparedness is that responses to the crisis have been ad-hoc ensuring that the country continues to lurch from one crisis peak to another, with the condition of living of ordinary citizens becoming harsher and ever more unbearable.

It is the combination of all of these that resulted in, and that is resulting in the present severely heightened levels of uncertainty, at the collective and individual levels, as well as on the national economic and domestic family economic levels.

It is the continuous precipitate trend towards deepening heightened uncertainty that has created the level of simmering Mass Anger that we are witnessing and the consequent push and pull towards Open Mass Discontentment, which is now beginning to find expression in open Mass Protests.

But the consciously promoted deceptive and spurious populist character of the party and regime, along with the conscious attempt to promote the iconisation of the inherent piety of the head of the regime, in the person of PMB, creating an enabling environment for the emergence and nurturing of  Cult of personality, is also ensuring that there will be no shortage of counter popular protests and protesters all Standing with PMB, Trekking for Change, or trying to compel all of us to be patient with the regime, no matter how wobbly it has become in terms of being able to address our problems.

Yet, one would have thought that a popular vote to Reject GEJ was also a vote to keep Patience out of our governance space [all pun intended]!

So given the current levels of hardship, given the fact that the government seems to be incapable of addressing the most severe of our economic challenges, and given the trend towards things getting worse, it only stands to reason that Mass Discontent will not only continue to break out, but will also continue to grow in both scope and intensity.

In the face of this reality, and given that the regime will also be pulled towards repression and or deployment of its populist base as a counter measure, it becomes very urgent, necessary, incumbent and imperative to understand how to navigate this season of discontent in a manner that will ensure the best possible outcome for ordinary citizens and the overwhelming majority of our people.

It is important for us to understand from the very beginning not only the underlying causes of our deepening National Development Crisis, but also the underlying factors driving the popular discontent.

It is also important that any decisive intervention and engagement on our part must be a conscious and well-articulated response based on our understanding.

There will be several different types of citizens that will be drawn into taking mass action, but those providing leadership, must be organised, they must not only provide enlightenment and education on the causes of the problems, they must also at the very least be armed with the rudiments of a clear understanding of what needs to be done to address the crisis.

Those providing leadership must not only oppose, they must also propose; they must be able to articulate and popularise demands both as slogans and as programs that can be implemented.

They must also have a clear understanding of the nature, character and types of social motive forces in society, understand and be able to identify those with an inherent interest in defending the status quo or transforming the status quo; and they must be able to identify the appropriate social forces to build alliances with and alliances around.

We must also understand that the present crisis is not going away soon, that the temptation is to shift a disproportionate burden of overcoming the present situation on the ordinary citizens, ordinary working people; and that as such we must be prepared for a long drawn out battle, for a series of integrated Mass Actions, each of which must build on previous ones while serving as a link to the subsequent ones.

And we must be armed with a program of action not only to take us out of the woods, but to also reorganise our society in our own collective interests.

Working people, whether working for others or in self-employment in small and medium businesses; the teeming mass of the unemployed and underemployed, and their organisations, will be central to our response, to building the resistance, and to reorganise society.

As in the words of the American declaration of independence; it is decisive for us to not only hold the above truth self-evident, but to be guided by it in our organising and mobilising.

One fundamentally necessary first step to ensure that we effectively navigate the season of discontent, is the traditional organisations of the Working Peoples, and the their historic organised allies in civil society, to immediately put together a National Organising Committee to Convene a National Delegates Conference Of The Popular Organisations of the People in a Conference Of The People, to articulate responses to our current national challenges and adopt A National Charter Of The People as a programmatic framework for overcoming these challenges and reorganising our society.

The time to Act Is Now.

(Gaskia is Co-Convener Say No Campaign [SNC]; And National Co-ordinator, Protest To Power Movement [P2PM].)
Posted by PublicInformationProjects at 18:22