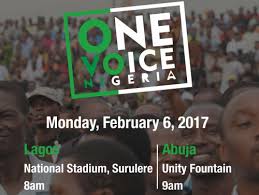 EnoughisEnough (EiE) Nigeria - a coalition of individuals and youth-led organizations committed to instituting a culture of good governance and public accountability in Nigeria through active citizenship, has confirmed that the I Stand With Nigeria/One Voice Nigeria rallies to protest corruption and worsening standard of living under the Muhammadu Buhari administration at all levels of government, will continue tomorrow in Lagos and Abuja.


This is a platform for real Nigerians to communicate their real pains to government at all levels in a peaceful and articulate manner with a view to getting lasting solutions to our problems, 2Baba had said in his first statement on the protests. This march is about demanding that all saboteurs of good government policies should hands off. This march is about encouraging positive minded Nigerians to continue to work without intimidation. We have a system that is clearly designed not to work for the majority.

"2face Idibia (2Baba) informed us late last night that on-going conversations with security agencies have not allayed his security concerns and so he had decided not to participate in a physical protest, said Yemi Adamolekun who is Executive Director for EiE. We thanked him for inviting us when he first decided on these protests, and informed him that we believe it is important, despite the risks, to continue with the demands, for the sake of the Nigerians who have put their trust in this movement. We will hold the Lagos Commissioner of Police and the Presidency to their words that citizens have the right to protest and that it is the responsibility of security agencies to provide security to all citizens.

EiE has a track record of galvanizing popular participation in holding governments accountable, through the #EnoughisEnough protests in 2010 that led to the handover of power to Goodluck Jonathan; the #OccupyNigeria in 2012 protests that forced the government to scale back on plans to increase fuel pump prices and set a new high for citizen engagement & mobilization; the #OurNASS protests in 2013 calling for accountability in the National Assembly that has continued with the #OpenNASS campaign. We have also continued to demand that Mr. President deliver on his promise to #BringBackOurGirls movement. It is important we continue to hold governments accountable and to vocalize the aspirations of a frustrated and disappointed people. This call has gone beyond 2Baba. It is now a Nigerian demand.

"Furthermore, the implied attempt by some elements in security agencies to stifle the inalienable rights of Nigerians to freedom of speech and assembly cannot be allowed. We are in a democracy and citizens must be able to express their displeasure with their elected representatives in a lawful manner."

The protests EiE is coordinating will hold at the Unity Fountain, Abuja from 9am and the National Stadium, Lagos from 8am. We also encourage citizens who have mobilized in other cities across the country to come out and make their voices heard.

Below again are the calls to action:

1)  Security
All Nigerians lives MUST matter. ‘My religion, ethnicity or what part of the country I live shouldnt determine the type of protection I get from my government.’
According to the Constitution, the security and welfare of the people shall be the primary purpose of government.

2) Education
To develop beyond oil, we have to invest in our human capital. Every child must have access to quality education. If our teachers are not paid, how will we raise the next generation to lead the country and run our businesses?

3) Health
Health is wealth. People die daily from lack of basic, affordable health care. We can definitely do better.

4) Power
Government needs to make it easier to generate power at the state and local government level so everything is not tied to the center. We need electricity to be productive. The cost of generating our own power is crippling.

5) Unemployment
Poor education plus a struggling economy means a lot of people are unemployed. Unemployed people are hungry and angry.

6) High cost of living
Food, transportation, medicine, everything is 3 times, 4 times more expensive but our salaries havent increased. What do we do???

7) Social Justice
According to the Constitution, The Federal Republic of Nigeria shall be a State based on the principles of democracy and social justice.
There cannot be one set of rules for the poor and another set for the rich.

8)  Transparency
The best way to kill corruption is to increase transparency. Government finances and contracts must be open and available to all. Who got the money, to do what and by when?

9)  Cost of government
Our governance is TOO expensive  federal, state, local  cars, housing, allowances. We must reduce the cost of maintaining our public officials

10)  Patriotism
I stand with Nigeria. There is enough in Nigeria for all of us to chop belleful. Enough is enough. We must put Nigeria first and keep all the greedy & selfish people away from leadership.

Call to Action
Between now and Monday, February 6, we ask you to share via videos, Facebook, Twitter, blogs, SMS to 0902-355-5335. How are these issues affecting you? What are your daily struggles? How is it doing you?

No matter what part of the world you are, share your stories. Tag @eienigeria on social media.

Use any of the hashtags #IStandWithNigeria #OneVoiceNigeria on social media.

We will take all the reports and send them to our elected representatives as ONE VOICE of Nigerians across party, ethnic and religious lines  as they hear real people talk about real issues.