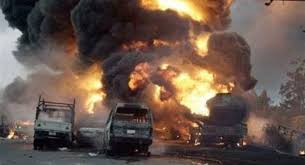 The recent Onitsha fuel station fire disaster that gutted a Mobil Petrol Filling Station and about 13 other residential buildings containing flat apartments, law firms, commercial shops and an electronics sales office and its warehouse, etc; is a divine warning and wakeup call to the present Government of Anambra State over its poor urban  and environmental planning, development and management. That is to say that the human tragedies so averted are divine and miraculous as well as teachable lessons and warning to the present Government of Anambra State.


In the referenced fire disaster that took place at the Denis Memorial Grammar School (DGMS) Roundabout in Onitsha on Wednesday Night, 15th February 2017 and spread to parts of Upper New Market Road and of Oguta Road; properties above mentioned including over six private vehicles, valued at over N1Billion were lost to the inferno with about four persons critically injured. For instance, a major electronics company with a sales plaza along DMGS by Upper New Market Road had on Monday, 13th February 2017 taken delivery of a container load of electronics; only for the whole products to get burnt beyond recognition by the inferno.

The inferno was caused by a faulty trailer lorry that lost its brake and hit the said Mobil Filling Station, leading to bursting of the petrol tanks with fire sparks. The flowing waste fuel caught fire, spread and found its way into gutters nearby; hitting and sparking vehicles and other inflammables in contact; leading to the affected buildings and other properties going up in flames.

The zero human casualties so recorded were due to the timing of the inferno (early hours of the night) and prompt escapes made and precautions taken by nearby residents 30 minutes before the inferno burst and escalated. All the early signals and calls made to nearby formations of the Anambra State Fire Service were abortive, which was why the inferno went viral causing catastrophic damages before the late arrival of the Delta State Fire Service. Intersociety team went to the incident arena on Saturday, 18th February 2017. We also understand that four other infernos took place simultaneously in other parts of the State and on the same date.

The DMGS Roundabout fuel station disaster is a wakeup call to the present Government of Anambra State and its Ministries of Environment and Urban Planning and Development. The urban and environmental planning, development and management of the William Madubuchi Obiano’s Government is nothing to write home about. The referenced ministries and their enforcement bodies are more of licit and illicit revenue hunting outfits than planning and management. That is to say that the State’s Urban and Environmental Planning and Management policies and enforcements are grossly ineffective, inefficient and in a sorry state.

The leadership of Intersociety has severally in recent times and even before then, drawn our advocacy attention to the present Administration of Governor Willie Obiano as well as that of its predecessor (Obi Administration) concerning poor urban and environmental planning and management run by the State’s Ministries of Environment, Regional and Urban Planning. In all these, Onitsha and Nnewi and their environs are the worst hit particularly in the areas of citing, locating and building of filling stations, industries (i.e. medium and large scales), market stalls and residential or commercial buildings in environmentally unfriendly, degradable and hazardous locations or areas.

For instance, there is a spate of planlessness in citing, locating and building of the above mentioned facilities particularly in the commercial centres or cities of the State. Till date, there are no befitting public cemeteries in Onitsha and environs. The old Awada and Onitsha cemeteries were crookedly sold by criminal officials of successive Governments of Anambra State to churches and individuals over twenty years ago; leaving the commercial city and its environs without any befitting public cemetery till date.

There are also reckless approvals by the present Government of Anambra State to individuals including criminal government appointees for building or erection of fuel filling stations in areas densely populated by residents and residential buildings. That is to say that over 80% of fuel filling stations built in the past two years in the urban cities of the State particularly in Onitsha and its environs is found to be located in areas or street roads located in the areas of densely populated residents and residential buildings.

It is our further observation that all the unathorized fuel filling stations under construction as at over two years ago and stopped by Governor Obiano’s predecessor, former Governor Peter Obi, had been allowed and completed as functional filling stations by the present Government of Anambra State. Cases in point are those located along Zik’s Avenue and Silas Work in Onitsha. Such environmentally unfriendly and hazardous fuel filling stations can be found in densely populated parts of  Obodoukwu and Atani Roads in Ogbaru LGA, Port Harcourt Road in Onitsha, Oraifite Street in Awada as well as other densely populated areas of Fegge, Awada, Nkpor, Okpoko, Woliwo, Omagba, Nnewi, to mention but a few. Such environmentally unfriendly and hazardous fuel filling stations cannot be erected without the criminal approval or authorization for a price by the Anambra State Urban Development Board (ASUDEB).

Other gross misconducts of the present Government of Anambra State are criminal approvals for location of medium and large scale industries in residential areas and approval for erection of “boys’ quarters” before building of “main buildings” in areas approved for conventional residential houses. This is rampant in the State’s commercial centres of Onitsha, Nnewi, Awada, Iyiowa Odekpe, Nsugbe, etc.

Such criminal approvals and erections are substantially responsible for urban street congestion and environmental degradation including littering the streets with functional and mal-functional private and commercial vehicular owing to lack of conventional residential parking spaces. In Asaba, Delta State, for instance, erection of residential buildings is strictly done according to the Delta State urban and environmental planning and management policies and enforcement rules; but in Anambra State, the reverse is grossly the case.

We call on the present Government of Anambra State to re-jig and reverse the present sorry state of its urban and environmental planning and management. All the fuel filling stations located in densely populated streets and areas of the State should be directed to relocate or convert them to other environmentally friendly uses such as fast food and shopping plazas or residential buildings. Location of industries in residential areas of the State must be outlawed; likewise the policy of building “boys’ quarters” before main buildings, and indiscriminate erection of market stores on drainages, waterways and other environmentally degradable places which must also be totally prohibited. There should be new befitting public cemeteries for Onitsha and environs to be located in Oba and Ogbaru, to be backed by enacted Law of the State to grant them immunity from encroachments.