News Release: Discovery Of Mysterious Billions In Nigeria: 34 Critical Questions Before The Federal Government & Its Agents 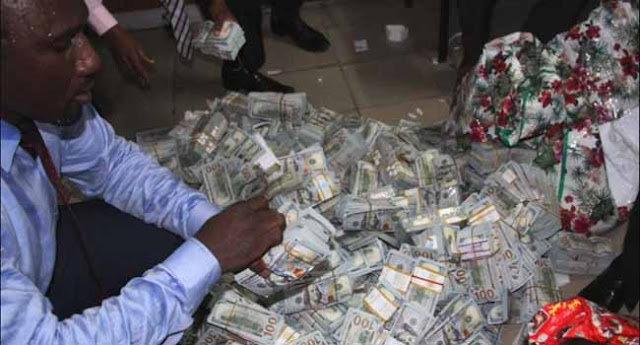 Deeply worried and concerned by a litany of discoveries of mysterious billions of naira worth of hard currencies including British Pounds, Euros, US Dollars and Naira Notes in Nigeria, the leadership of International Society for Civil Liberties & the Rule of Law (Intersociety) have resolved to raise a 34-Point critical questions before the Federal Government of Nigeria and its agents.


We have also been bombarded with calls and text messages for our informed comments by a section of the print media in Nigeria concerning the above named issues particularly the 12th April 2017 “discovery” of naira equivalent of over N13.3billion domiciled in foreign currencies including US dollars, British pounds and Naira notes at a high rising building in Ikoyi area of Lagos State, Southwest Nigeria. The criminally dumped currency notes include $43.4million dollars, 28,800 British Pounds and N23.2million; totaling over N13.3billion.

Not long ago, on 3rd February 2017, officials of EFCC claimed that they “discovered” and “recovered” another mysterious sum of $9.8million domiciled in US dollars ($9.77million) and British pounds (74,000 British Pounds). The “discovery” and “recovery”, according to EFCC were made in a house located in Kaduna State belonging to a former Managing Director of NNPC, Mr. Andrew Yakubu. Critics also alleged that the said former NNPC Managing Director is presently having some political differences with the incumbent governor of Kaduna State, Mallam Nasiru el-Rufai; possibly over next governorship poll in the State.

The authorities of State Security Services (SSS) had in their press briefing following the Service’s late night raids of the sleeping and dwelling houses of some serving judges on 8th October 2016, claimed that they “discovered” $2million cash in the house of Hon Justice Adeniyi Adeomola; a serving judge of the Federal High Court. Hon Justice Ademola, alongside others was spuriously accused of corruption by the SSS leading to the blue or evil hour of the night invasion of their private residences. Hon Justice Ademola Adeniyi and his wife-Olubowale (current Head of Service of Lagos State) were on 6th April 2017 discharged and acquitted by a High Court of the Federal Capital Territory in Abuja on spurious allegation of corruption leveled against them.

As if these are not enough, the EFCC has illicitly embarked on further mysterious cash discovery jamboree by invading markets and other private business outlets, confiscating cash sums belonging to some innocent business operators. These include N49million it claimed to have “discovered” and “recovered” at the Kaduna airport on March 14, 2017; N448million confiscated at a Lagos Bureau de Change plaza on 7th April 2017 and another N250million confiscated inside a shop located at Balogun Market in Lagos State.

The legal basis and intents of these operations as well as their genuineness have remained sketchy, shoddy, blatant, brazen and condemnable. In crime, guilty act (actus reus) can never secure competent investigation, prosecution, conviction and sentencing except it is combined with guilty mind (mens rea).  The main trust of criminal investigation is rested on ascertainment of guilty mind (mens rea) or otherwise, and where mens rea fails to establish itself in criminal investigation, actus reus or guilty act which has been found cannot secure proper prosecution, conviction and sentencing; with the exception being in cases of strict and statutory liability offenses such as traffic and sanitary offenses.

Till date and as we write, the generality of Nigerians do not know the whereabouts of all the monies that the SSS, EFCC and the Federal Government claimed falsely or otherwise to have recovered since the mysterious cash “discovery” and “recovery” jamboree was started by the SSS in October 2016. Whether such mysterious cash sums actually and genuinely exist or were arranged and periodically planted to frame up regime enemies and falsely shore up the so called Federal Government’s anti corruption crusade; have totally remained outside the collective or public knowledge of the generality of Nigerians till date.
We have severally observed and still observe that a lot of things are irremediably wrong in Nigeria particularly under the present dispensation. The sanctity of public governance in the country particularly under the present dispensation is so tainted that it looks as if the country is perpetually gripped and cloaked in leadership gangsterism and mafiocracy

We understand the sentiments shared by most Nigerians including conscientious citizens in the media who always want our informed and unbiased positions to be aired regarding burning national issues particularly in matters of this nature. We are deeply pained and concerned because facts of the issues as they concern our collective interests including governance, security, moral conducts of our leaders and our general welfare are constantly desolated, corrupted and bastardized by those steering the ship of public governance in trust for the generality of Nigerians particularly under the present dispensation at the Federal level. In other words, burning national issues such as that under discussion are never presented to the generality of Nigerians as they truly happened.