News Release: Ikoyi Planted Funds: In Solidarity With Suspended SGF’s Question: Who Is The Presidency? & Why Osibanjo’s Probe Team Should Be Disbanded 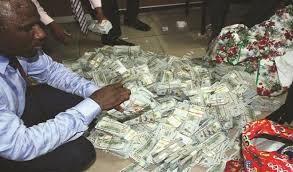 It is the observation of the leadership of International Society for Civil Liberties & the Rule of Law that the appointment of the VeePee Yemi Osibanjo’s civil probe or fact finding team to look into the 12th April 2017 alleged discovery of a total of over N13.3billion in a flat apartment in Osborne Towers at Ikoyi in Lagos State; is grossly and fundamentally erroneous in the eyes of the law and moral decency.


The Federal Government of Nigeria had on the heels of the alleged discovery and recovery; claimed a false victory and attributed it to “the handiwork of whistle blowing policy of the present Federal Government in sustaining its fight against corruption”. The false stance and declaration of the Federal Government above appears to have caught the attention and collective mindsets of many Nigerians with the help of media creation and sensational reporting.

We at Intersociety are not and can never be part of such broad-day falsehood and deceit associated with the so called fight against corruption under the present dispensation until the real and concrete steps are taken in the that direction.

Intersociety is thoroughly self-sustaining and as a thorough bred independent, research and knowledge based organization in the advocacy areas of civil liberties and rule of law, democracy and good governance and accountability; and public security and safety; with its key officers and volunteers grounded in law, criminology, security studies, conflict and peace studies and journalism; our organization can never be taken for a ride or burst to a corner in matters of civil liberties and public governance policies and actions/conducts by any government, non state actor, individual or group in Nigeria or any part thereof.
It therefore remains our firm position that the anti corruption policies and conducts of the present dispensation in Nigeria have woefully failed a repugnancy test. They are nothing more than witch-hunting and governmental desolation and crookedness.

As far as anti corruption is concerned in Nigeria or any part thereof, our organization has done several investigations on their handling styles by the present dispensation in the Federation and our findings have consistently shown that they are nothing to write home about. That is to say that those who claim to be fighting corruption in the present Nigeria are chiefly responsible for corruption as we have it in today’s Nigeria; a case of hyper corrupt people fighting corruption.

We had in our 16th April 2017 public statement following the so called discovery of looted sum of over N13.3billion, raised 34 questions for the present the Federal Government; till date and as we write, none of the 34 questions has been answered correctly in part or wholly.

It was and still is our firm advocacy position that the Federal Government’s false claims of discovery and recovery of looted sum of over N13.3billion in Osborne Towers at Ikoyi must not be separated from the $2million Justice Ademola’s house and $9.8million Moses Yakubu’s house discovery and recovery, etc.
It remains our firm position, too, that those monies may not have been genuinely discovered and recovered. Rather, they may most likely have been planted by some cabalistic and malevolent politicians in Nigeria’s Presidency for the purpose of setting up or roping in some penciled down regime enemies or electoral, economic and political enemies of the federally ruling APC.

A clear case in point is the recent public statement issued by the Anambra State branch of the federally ruling APC accusing the former Governor of Anambra State, Mr. Peter Obi of being the “owner of the looted funds” discovered in one of the flat apartments in Osborne Towers at Ikoyi. The Anambra APC statement further calls on the former Governor in most scornful and wicked manner to cut short his trip abroad and come home and answer/take responsibility of the discovered looted funds.

The Anambra APC’s latest accusation is anchored mere fact that Peter Obi; likewise others, rents and uses one of the flat apartments in the multi story building where the money was said to have been discovered. His said rented flat apartment was not the one where the illicit fund was stashed; yet the Anambra APC is bent on singling him out.

The Anambra APC statement came days after the announcement by a source in the Presidency of the appointment of a civil probe team chaired by Vice President, Yemi Osibanjo to probe same and report back to the appointing source in fourteen days. The Anambra APC’s statement is clearly aimed at either stampeding the civil probe or confirming the high possibility of the Party’s controlled Federal Government agents planting such money to rope in the named or similarly targeted “enemy citizens”. We still hold that it is possible the named huge sums and similarly planted others were planted to rope in enemy target(s). It is also possible that the Ikoyi Osborne Towers’ planted money miraculously missed its target(s).

In all, we make bold to say that the deliberate refusal of the present Federal Government to allow for independent, impartial and expert criminal investigations to be conducted or carried out by the office of the Deputy Inspector General of Police for Criminal Investigations and its Fraud and allied departments in the three high profile simulated “looted funds discoveries”; have thrown up the following five critical questions:
(1)Who planted the sum of $2million in the sleeping abode of Hon Justice Ademola Adeniji in the night of 8th October 2016 and where is the money? (2) Who planted the sum of $9.8million on 3rd February 2017 in the Kaduna house of Mr. Moses Yakubu (former MD of NNPC) and where is the money? (3) Who planted the total sum of N13.3billion on 12th April or eve of it in one of the flat apartments in Osborne Towers at Ikoyi Lagos and where is the money? (4)  What are the sources of the planted monies or who are the lenders of same? (5) Do their sources have to do with CBN, presidentially/CBN linked or controlled forex dealers or hired commercial Bank(s)?

We have also identified the following fundamental errors and blunders in the appointment of Osibanjo’s civil probe team:
The unanswered question: who is the Presidency?; thrown in the direction of the current Federal Government by the suspended Secretary to the Government of the Federation (SGF) has messed up and made mockery of the independence, impartiality, genuineness and credibility of the Osibanjo’s probe team and raised a high risk of one being a judge in one’s own case (i.e. possibility of the same or allied planters of the funds and their accomplices being asked to probe themselves).

The issue under civil probe (Ikoyi planted or stashed funds) must not be treated alone. Other planted funds such as those found in Justice Ademola and Moses Yakubu’s houses and others should be taken together in any government credible criminal investigation.

The Osibanjo’s civil probe team is an anathema and unknown to Nigeria’s Criminal Justice System and amounts to gross usurpation and undermining of the statutory functions of criminal investigative agencies in the country particularly the Force CID and its DIG-FCID in matters of this nature that borders on fraud and related others.

Prof Yemi Osibanjo and barely knowledgeable AGF know little or nothing about expert, intensive and extensive criminal investigations and their modern methodologies. Their being senior lawyers notwithstanding.

Appointment of Osibanjo’s probe team is a sign of total failure of the Nigerian criminal intelligence and investigation system under the present dispensation. That is to say that these energy wastages and allied costly expenditures would not have arisen if Nigeria has fully or substantially embraced electronic security including footage or LCD/screen/CCTV, camera and computer detective security; which can easily expose the planters of such funds; and give a forensic room for their criminal interrogations to ascertain or establish their criminal intents or otherwise.

The best Osibanjo’s civil probe team can achieve is to establish the act itself, which is already known to Nigerians; but it can never establish the guilty intent or mens rea parented by the guilty act, because it gravely lacks fundamental ingredients of modern criminal enquiry. For instance, it can merely question, but cannot interrogate!

Handing the matter over to EFCC to investigate is as bad as, if not worse than the Osibanjo’s civil probe; because the Commission under the present Administration is gravely leprous and has earned national and international notoriety as an appendage of the present “Presidency” in Nigeria.

We advise strongly that the Osibanjo’s probe team should throw in the towel because of obvious lack of technical competence and expertise, legality, legitimacy, neutrality and credibility.

The Osibanjo’s civil probe team should dissolve itself or be disbanded so as to allow the NPF’s DIG-FCID and its relevant departments to step in and get the suspended DG-NIA and others under probe arrested. DIG-FCID should also invite all individuals and groups relevant to its criminal investigation including the past individual owner of the said house, the present corporate owner (i.e. Bank) as well as the corporate and individual tenants in the house to assist it in its criminal investigation.