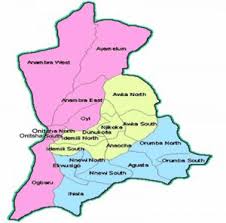 This Release focuses on menace and violent activities of Anambra’s returned killer-“generals” and violent market “leaders”. For the records and avoidance of doubt, killer-“generals” and violent market “leaders” of Anambra State are made up of chief touts and lead-retreatists as well as militant traders and other inherently violent citizens recruited at market, communal, street and State levels for group, political and vigilante violence who got indoctrinated in the art of black powers and physical violence through guns and machetes and voodooism.


They had been recruited, trained, sponsored and used in one way or the other by successive and present Governments of the State. These referenced “killer-“generals” and violent market “leaders” and their atrocities originated from disastrous Government of Dr. Chinweoke Mbadinuju (1999-2003) and its butchery “Bakassi Boys”; and majorly drawn from Onitsha, Nnewi and Aba market populations. Prominent among them then were Camillus Ebekue, Paulinus Ubanozie, WORLD BANK-Orakwu, NTU-Ozubulu, BRAVO-Ozubulu, Bona Maduafokwa, Chuma Nzeribe and Emeka Asoanya (a.k.a. War Machine, who is now the Category Committee Chair of Onitsha South LGA.
They held sway in the inglorious epoch of murderous Onitsha Traders Vigilante Group (OTA); a murderous militia wing of Onitsha Market Traders Association backed by Dr. CC Mbadinuju and then headed by his kinsman, late Mr. Paulinus Ubanozie. OTA Vigilante Group was scrapped in July 2000 by the Mbadinuju Administration, following public outcries and street demonstrations over indiscriminate and random butchering of citizens in various parts of Onitsha and environs. It was replaced by the Mbadinuju Administration with yet another murderous outfit, called “Anambra Vigilante Services (AVS)” (a.k.a. Bakassi Boys) through AVS Law No 1 of July 2000.
Among recorded innocent and defenseless citizens butchered, raped or grievously maimed by the duo of murderous OTA and AVS then were Chuma Onwuazo-a trader and Bonaventure Egbuawa-a human rights activist (murdered in April and July 2000, respectively, by then OTA Vigilante Group), Hon. Ifeanyi Ibegbu (then member of  Anambra State House of Assembly) abducted and tortured by  AVS (Bakassi Boys) in the late night of  21st August 2000 at Bakassi Boys White House, Onitsha Main Market but miraculously saved through timely intervention of then IGP, Musiliu Smith;  Edward Okeke ( a popular prophet of Nawgu, murdered by AVS on 9th November 2000  over his prophesy concerning Gov Chinweoke Mbadinuju’s second term bid), Ezeodimegwu Okonkwo ( a.k.a. Jidoga, a popular musician;  murdered by AVS on 18th February 2001 at Nusgbe “33”).
Others are Ikechukwu Nwagboo ( then personal assistant to Hon Chudi Offodile of the House of Reps; murdered in place of his boss by AVS  in February 2001), Rockfeller Okeke (a top staff of the then Anambra State Ministry of Information; murdered by AVS inside his residence on 23rd April 2001), Felix Ikebude (an apologist of Emeka Offor’s APF; murdered by AVS in December 2001), Sunday Uzokwe (a physically challenged community leader in Ozubulu, murdered by AVS on 30th  January 2002), Mrs. Ngozi Oranu (widow of an Eziowelle wealthy businessman, raped and murdered over her husband’s properties and wealth by AVS at the Bakassi Boys White House, Onitsha Main Market in November 2001).


The rest are Barnabas Igwe (then Onitsha Bar Association Chairman murdered  by AVS in the evening of 1st September 2002 along Oraifite Street, Awada), Barr (Mrs.) Amaka Blessing Igwe “A. B. Girl” (wife of Barrister Barnabas Igwe murdered by AVS alongside her husband on 1st September 2002 along Oraifite Street, Awada), and Miss Chinenye Okoye, an SS2 Student of the Mathamavis Secondary School, Umuoji in Anambra State; abducted by AVS ( Bakassi Boys) and taken to its White House in Onitsha Main Market and raped for 60 days. Sources: The News Magazine, 21st October 2002, page 21; Civil Liberties Organization, Anambra State Branch and Emeka Umeagbalasi, 2002, 2003 and 2011.

These are to mention but a few. A total of over 5000 citizens were slain and thousands of others grievously maimed in the inglorious epoch era (1998-2002) of OTA and AVS (Bakassi Boys) Vigilante Groups. Several young married and unmarried women were also snatched from their husbands, or parents or guardians and raped or forced into sexual intercourse with members and commanders of the duo of OTA and AVS. Militant market leaders using the said vigilante operatives also became an outlaw, to the extent of having forced sexual intercourse with young married women and unmarried others in a broad day light inside their offices located in open markets; with their husbands or parents or guardians watching helplessly and fearing for their lives.
Today, among the remnants of the named killer-“generals” and violent market “leaders” who have resurfaced in the State are “General” Chinenye Ihemko (a.k.a. Okpompi). He is the current AVS chief of Onitsha Main Market and a wealthy monstrous vigilantism industrialist in Anambra State. He is also one of those picked from Aba market population in July 2000 courtesy of then Mbadinuju Administration and made one of the earliest unit commanders of AVS or Bakassi Boys. Mr. Emeka Asoanya (a.k.a. War Machine) or “Gen” War Machine is Governor Willie Obiano’s current Caretaker Committee Chairman of Onitsha South Local Government Area. He rose to brigandage and militancy during the Mbadinuju’s Administration through a splinter market association, named “ASMATA” and its allied propaganda and government image laundering.


He also featured militantly in the court-declared unlawful Government of Dr. Chris Ngige, leading to escalation of violence of alarming proportion in various markets in the State. The militancy and other forms of violence reached their peak in 2005 at Ogbaru Main Market (Ogbaru Market Mayhem of 2005) during which at least 10 innocent citizens including Comrade Anthony Ezeh of Achina Community in Aguata Local Government Area were butchered in a broad day light. In the said mayhem, Mr. Emeka Asoanya was strongly fingered. Some say, he earned his present nickname “War Machine” for his coordination artistry in the said State markets’ mayhem including that of Ogbaru Main Market of 2005.


One of the new entrants into Anambra’s list of killer-“generals” and violent market “leaders” is Mr. Okwudili Ezenwankwo (a.k.a. Ewepudike) or “Gen” Ewepudike. Barely ten years ago, he sold crayfish at Ose-Okwo-Odu Market in Onitsha. A barely literate trader, he later joined “Anambra market politics” from his market union through a group called “Anambra State Market Elders Forum” or ASMEF (packaged as a market pressure group advocating for conduct of elections in Anambra Markets) and penetrated the then Administration of Mr. Peter Obi; from where he formed Anambra State Market Traders Association or AMATASS; an unelected and appointive central market association supported and promoted by the Obi Administration.

Having been raised and promoted during the Peter Obi administration, Mr. Okwudili Ezenwakwo or “Gen” Ewepudike gained access to government and security establishments and became artistic in market propaganda politics and group militancy. Today, he has transmogrified into Obiano Government as one of its leading apologists and militant market “leaders”. “Gen” Ewepudike is presently believed by many Anambra political and market observers to be stupendously rich. His home town of Nanka Community in Anambra State is already boiling with a litany of communal disputes including youth unrest and kingship tussle with his name being co-fingered. He now addresses himself as “President of AMATAS”, President of “Southeast Traders Association” and President of Nigerian Traders Association”.


During the recent (2015 and 2016) nonviolent street protests and processions by the Indigenous People of Biafra and subsequent massacre of hundreds of its members and supporters; Mr. Okwudili Ezenwakwo or “Gen” Ewepudike and his arrangee market associations were contracted and suspected to have been sponsored by the Obiano Administration and Buhari led Federal Government to kick against the protests and processions of his unarmed and defenceless kinsmen and women through press conferences and campaigns of calumny. Various security establishments in Anambra State are at the beck and call of “Gen” Ewepudike with which he does whatever he likes with impunity and reckless abandon.


Mr. Kenneth Okonkwor or “Gen” Kenneth Okonkwor is another raging killer-“general” in Anambra State. Before his appointment by Gov William Maduabuchukwu Obiano as “Managing Director and Superintendent General” of “Operation Clean & Healthy Anambra” (a.k.a. OCHA Brigade), he was Gov Obiano’s coordinator of Anambra Vigilante Service or central body supervising motley of street, market, community and State level armed vigilante groups in Anambra State, numbering about, if not over 1000.


Today, “Gen” Okonkwor is not only given access to all strategic security formations in the State organized under “Anambra State Joint Security Taskforce or JTF”, but he has also become an outlaw and untouchable; turning the State and its innocent citizens into nightmare and terror. He is so reckless, militant and power drunk that he rolled out earlier this month bulldozers into Okpuno Ezi-Nkwelle in Nkwelle Ezunaka Community and Oba Community of Anambra State; backed by various security establishments including army, mobile and SARS police and embarked on extra judicial demolition of residential buildings belonging to innocent and hard-working citizens of the State.


Apart from claiming in a meeting observed by the leadership of Int’l Human Rights & Equity Defense Foundation (I-REF) led by Comrade Justus Ijeoma that “Gov Willie Obiano” mandated him to raise N2B for his forthcoming governorship election campaign”, “Gen” Kenneth Okonkwor also embarked on random extortion of average of N200, 000 per building leading to forceful collection of N37M for him from about 186 buildings at Okpuno-Ezi-Nkwelle Estate alone. The money forcefully raised was handed over to him personally, according to I-REF leadership. Key executive members of the Estate’s Landlords Association were also arrested at the instance of “Gen” Kenneth Okonkwor and his “OCHA Brigade” and detained for days at the SSS State Directorate, Amawbia, Anambra State. It took the intervention of Comrade Justus Ijeoma and his I-REF for them to be freed.

During the said demolition, those who paid the said bribes have their buildings spared and those who could not pay including widows and retirees have theirs demolished without valid court orders or pronouncements. As we speak, the Government of Willie Obiano has kept mute over the issue despite public and media outcries as well as a formal and facts laden petition sent to it by the leadership of I-REF, which thoroughly investigated the matter. The I-REF letter was dated 8th May 2017.


The list of killer-“generals” and violent market “leaders” in Anambra State and their militancy and other forms of violence are too numerous to mention; which is why our advocacy searchlight is beamed on them so as to alert the People of the State and authorities of the Federal Government and other concerned citizens and groups for the purpose of checkmating them. This is more so when the all-important governorship election in the State is around the corner; hence the urgent need to tame their militancy, lawlessness and excesses before it is too late.


For: Int’l Society for Civil Liberties & the Rule of Law