News Release: South East CLO Says No To Demolition Of Houses At Okpuno Ezi Nkwele, Anambra State. Calls For Probe Of The Activities Of Ocha Brigade 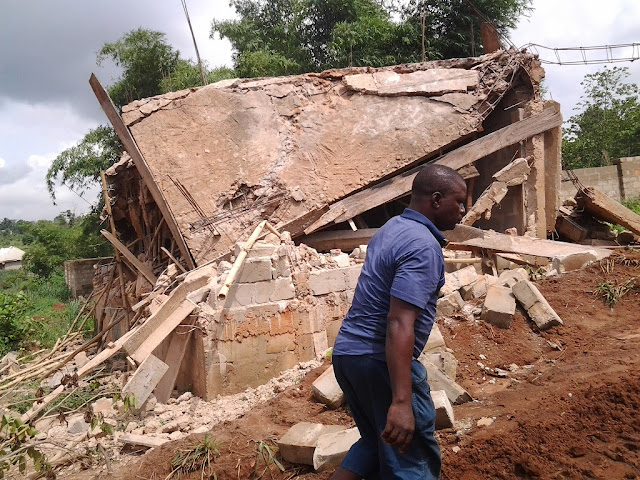 Landlords and Residents of Okpuno Ezi –Nkwele Estate in Nkwele-Ezunaka, Oyi Local Government Area,  are passing through the most traumatic period of their lives presently in Anambra State.


Widows and distraught property owners in the area which included scores of Ndi Anambra who ran home from the Boko Haram ravaged parts of the North are experiencing another tragedy worse than what they suffered in the North owing to the wanton demolition of their properties by the Operation Clean and Healthy Anambra a.k.a Ocha Brigade purportedly acting on the executive orders of Governor Willie Obiano.

What started as mere threat to the people of the area to allegedly contribute to ‘regularise’ their property standing with the government snowballed into a full blown devastating experience since 24th April 2017, when the Ocha Brigade Commander, Kenneth Okonkwo moved into the estate with an excavator, bulldozer and bevy of security agents which included the Police, Army and Naval officers, mowing down buildings and throwing men, women and children into panic and psychological torture.
Some of the property owners who spoke to the CLO alleged that Okonkwo said he was acting on the instructions of the Governor to raise N2 Billion naira from the Estate owners for the Governor’s second term reelection bid.

The property owners ran helter –skelter when  they realized that Okonkwo meant ‘business’ as their buildings were being ‘cannibalised’  and had allegedly raised about N39 million so far to Okonwo while frantically running around to meet up with more demands.

Apart from collective demand paid by the Landlords Association, individual property owners were alleged to have paid amounts ranging from N500,000  to N1,000,000 to Okonkwo and his aides for their buildings to be spared /skipped in the ongoing demolition exercise.
When the CLO visited the estate, it was observed that the demolition was being carried out in a haphazard way lending credence to the fact that some were actually spared when some palms might have been actually ‘greased’.

Enquiries by the CLO actually confirmed that some portions of the said area were given to the government on lease for Agricultural purposes in the year 1937 during the colonial era.  Indigenes of the community said successive governments in the state have often defaulted in the payment of royalty to the community for a cumulative period of 77 years.
Plots of lands belonging to the United Ezi-Nkwele Landlords Association is clearly detached from the Agric farm land but the indigenes told the CLO that government has not been forthcoming in delineating the boundaries between the farm land and the  remaining plots.

But the landlord association was duly registered with the CAC while government turned the other eye when they commenced developing the area over ten years ago, built houses, constructed roads and connected electricity with streets also approved by Oyi Local Government Area.
We therefore view the present demolition exercise as not only callous, insensitive but a manifestation of excesses of government aides emboldened in their acts by the liberalism of the state chief executive whom some   corrupt minded individuals have been exploiting for their personal gains knowing that they will not be reprimanded or punished. The action is condemnable by the CLO.

Chapter 2 Section 14b of the Constitution of the Federal Republic of Nigeria as amended stated that “the security and welfare of the people shall be the primary purpose of the government and (c) “the participation by the people in their government shall be ensured in accordance with the provisions of this constitution.

Responsiveness is one of the core cardinal characteristics of good governance. The silence of the government of Anambra State since this ugly development started is totally condemned. The Governor has also not deemed it necessary to visit the estate or grant audience to the affected property owners in the area thereby leaving them at the mercy of name-droppers and aides who have instead reaped bountifully from their problem.  Why carry out a demolition exercise at this period without proper notification and laid down rules?

For those who ran back to their states from the North owing to insecurity and fear for their lives from the activities of insurgents to still suffer the same fate in Igbo land , Anambra State sends a very wrong signal and such doesn’t cast any positive image on the present Obiano administration even when he is seeking re-election in office.

We call for the immediate halt of any further demolition in the said area and also total evacuation of any vestiges of the demolition machines in the area. This will   calm frayed nerves and lead to a drop in the blood pressure of most of the residents of the area who have been at the verge of suffering several health complications since the demolition started.
This is the time to curtail the excesses of Ocha Brigade and its commander.  In the course of this inhuman demolition, scores of people were arrested and dumped in DSS custody.  It still baffles the CLO on the link between the DSS and Ocha Brigade and how people who were not arrested with weapons are dumped in a Secret Service cell.

The government should order for a full scale investigation into what transpired in the demolition exercise and the role played by Mr Kenneth Okonkwo and his aides in the whole saga most especially on the issues of exchange of money.

The Governor and Government of Anambra State should come out and make a categorical statement stating all the facts on the allegation of collecting N2b for the governor’s reelection project.

Let the government set up a panel of enquiry made up of people of impeccable character that will not only come out with a clear delineation of the boundary between the Agric farm land and the other estate but ensure that all allegations of bribery, intimidation and selective implementation of the demolition exercise will be clearly addressed.
Justice must be served on this anomaly and we demand that those whose houses have been demolished already shall not be made sacrificial lambs in this case. Some of the affected widows, Ann Ajah ,07061675363, Amaka Ndubisi, 08030868858 and Blessing Obi  alongside others should be rehabilitated immediately .