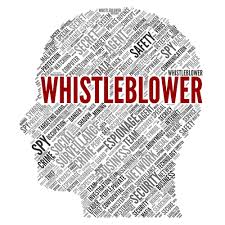 When the whistleblower policy was unveiled last December by the Muhammadu Buhari administration, it was roundly hailed by the populace as a long-awaited and much desired weapon in the fight against corruption, the single most visible and widely acknowledged reason Nigeria has remained stuck in the groove of under-development. And to the delight of many, especially victims of corruption, the last six months has seen the policy largely living up to its billing, what with the confounding recoveries of tons upon tons of looted funds in various denominations stashed away in the most unimaginable hideaways.

But as it seems, it may be too early for high-fiving or any display of other gestures of celebration. Neither the Federal Government nor Kemi Adeosun, Minister of Finance, who announced the policy on behalf of government and whose Ministry is the manager and implementer of the policy, should rejoice just yet in view of the obvious threat to whistleblowing as result of recurring persecution and victimization of whistleblowers by their employers.


Since the policy kicked off, no fewer than three government employees are known to have been wrongfully fired from their jobs for reporting cases of fraud in their workplaces. This development must be of serious concern to both government and the people who genuinely expect whistleblowing to significantly curb corruption and eventually entrench accountability in both the public sector and the corporate world.

As the Department for Business Innovation and Skills in London pointed out, two main barriers whistleblowers face are (1) fear of reprisal as a result of making a disclosure and (2) that no action will be taken if they do make the decision to “blow the whistle.”  Without any iota of doubt, the first barrier is gradually taking its place as the dominant feature of whistleblowing among public sector workers in Nigeria. No notable incident has been recorded in the private sector, to the best of one’s knowledge. Nonetheless, the danger posed to the realization of accountability in the public sector and by extension the anti-corruption campaign due to the persecution of whistleblowers, cannot be over-emphasised.

A recap of three incidents of victimization of whistleblowers will not only expose the extent to which reprisals appear to be gnawing away at the soul of the policy, but also address our minds to how relentless official impunity continues to renew itself in a more virulent manner even in a professed atmosphere of “change.”

Not in the order in which they occurred though, it begins with the story of Ntia Thompson, Assistant Director (Servicom Unit) of the Directorate of Technical Cooperation in Africa (DTCA), an agency of the Ministry of Foreign Affairs. On April 25, 2016, he reported to the Economic and Financial Crime Commission (EFCC) a case of fraud to the tune of $229,000 perpetrated by Mohammed Kachallah, Director-General of DTCA and some officers. The stolen money was meant for the Monitoring and Evaluation of projects executed across Africa and funded from the Nigeria Technical Cooperation Fund (NTCF), as well as for organizing events marking the first ten years of the Trust Fund.

But instead of directing the money towards that end, Kachallah and his co-conspirators diverted it into their pockets. When Thompson reported the fraudulent diversion to the EFCC, he was hounded, threatened, suspended, and eventually compulsorily retired from the services of the DTCA with effect from February 7, 2017. Since then, he has been running around in search of justice.

Although the Acting President, Yemi Osinbajo, a couple of months ago ordered that the EFCC investigate Thompson’s petition, nothing has been heard from Ibrahim Magu and his men up till now. Also, regrettably, not a single word from the administrator of the policy, Ministry of Finance, which is supposed to be in the forefront of ensuring the safety and protection of whistleblowers.

However, in fairness to the Office of Head of the Civil Service of the Federation, they intervened with two separate letters to Sola Enikanolaye, permanent secretary, Ministry of Foreign Affairs, directing the reinstatement of Thompson and stating categorically that the offences allegedly committed by the officer were not punishable by retirement from service. The last letter was sent to Enikaolaye on April 5, 2017. Up till this moment, he has brazenly refused to comply with the order from the Head of Service. And instead of Geoffrey Onyeama, Minister of Foreign Affairs, to weigh in by directing the permanent secretary to immediately comply with the order to return Thompson to office, he too has been disturbingly silent, leaving Thompson to languish in utter hopelessness.

The second case involves Aaron Kaase, Principal Administrative Officer at the Police Service Commission (PSC). On May 22, 2015, he submitted an evidence-based petition to the Independent Corrupt Practices and other Related Offences Commission (ICPC) against the Chairman, Mike Okiro, alleging acts of corruption totaling N275, 525, 000. Following Kaase’s petition against Okiro, the PSC issued a letter backdated to May 21, 2015, suspending him from work indefinitely without pay.

They claimed he was suspended on account of a prima facie case of serious misconduct based on spurious arrest and detention by the police, and arraignment on a fictitious criminal charge. Kaase received no previous query nor was any claim of “serious misconduct” a subject of any investigation which established guilt against him. For more than two years he has remained on suspension without pay while his fundamental rights are continuously violated.

And then there is the case of Murtala Ibrahim, Unit Head/ICT Process Audit and Special Investigation Unit at the Federal Mortgage Bank of Nigeria. He was recently dismissed for exposing contract scams and for refusing to endorse the bank’s manufactured 2016 Half-Year Income Validation Report. The Finance and Accounts Group reported a surplus of income over expenditure of the sum of N423, 653, 187 which the Internal Audit Group found out was actually a loss, and not profit. Ibrahim brought to the attention of Babatunde Fashola, Minister of Power, Works and Housing, the fraudulent manner in which the bank was being managed and also his own persecution by the bank’s management, all to no avail.

Clearly, these are heartbreaking tales that cast a big shadow of doubt on the survival of whistleblowing as a potent tool for the war against corruption in Nigeria. When potential whistleblowers hear or read these unpalatable stories about the plight of those who had made disclosures before them under the policy, the way they are exposed to danger with no protection of any kind from relevant stakeholders in the society, the first reaction would be to obey the law of nature: self-preservation. They will naturally refrain from reporting wrongdoings no matter how grave they are.

Government need not be reminded that whistleblowing is a patriotic act for which those who engage in it deserve to be rewarded and fully protected in all ramifications, even while the whistleblower protection bill is still being processed. To abandon them to their fate is to strengthen the corrupt and their friends, while sounding the death knell at this very stage early days to a productive and persuasive mechanism for fighting corruption.