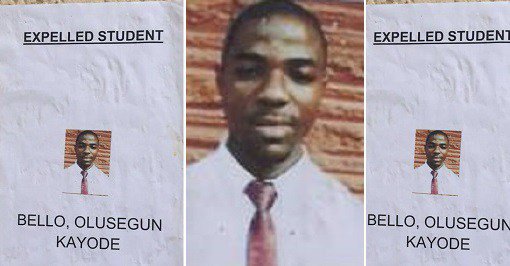 How can one make a good lawyer if he  does not have the courage to dissent? Are lawyers meant to be what Fela tagged Zombie? Is the Nigerian Law School telling us that the school is now a full-fledged barrack? What is even education if it does not help to embolden freedom and combat slavery?

These are the few questions that the United Action for Democracy (UAD) will like to pose; not only for the authorities of the Nigerian Law School, but for all thinking and progressive people.

We want to say that the managers of Education in the country are more of tyrants than teachers. They hate any voice of dissent. They prefer praise-singers and mumus as students. We must all recall that UNILAG and many universities have been terrorising students whenever they disagree with the dictates of the management or make demands over the barbaric way they live on campus and in the hostels. Femi Adeyeye is still under suspension, and have been brutalised and even sent illegally to Kirikiri Maximum Prison.

We in the UAD uses this opportunity to call on all people of conscience to stand up in defence of Kayode Bello whose only crime was writing a letter to the management pointing out to deplorable welfare conditions in the Law School. We also call on the Law School to immediately listen to the voices of reason and recall Kayode Bello now!

We hold that the Law School not only need revamping; its school fees must be massively reduced so that poor people would not have to go bankrupt just to attend the school. There is nothing professional about an expensive school that has really not produced better lawyers than when the school was almost free then.

UAD calls on Law students all over the country to organise, especially around the Alliance of Nigerian Students Against Neo-Liberal Attacks (ANSA); Legal Education Rights Agenda (LERA) and such other bodies to kick start coordinated lecture boycotts and force the Law School to do the needful.

UAD also call on practising lawyers and other concerned citizens to rise in defence of Kayode Bello.

We as well call for the immediate reinstatement of Femi Adeyeye of UNILAG who has been in an unlawful and cruel academic sabbaticals.

1. An immediate recall of Kayode Bello, as he has not done anything unlaful against known laws.

2. We call for the immediate arrest and prosecution of those who ordered and carried out the assault on Kayode Bello in the pretext of forcing him out of Law School.

3. An immediate drastic reduction in the Law School fees, to allow poor people to participate!

4. We call for the immediate review and revamping of the Law School management to include real democratic settings!

5. UAD also call for the immediate reinstatement of Femi Adeyeye and the UNILAG students' Union; and such other unions and student-activists under illegal and vindictive victimisations.

UAD finally calls for an end to tyranny and impunity on our campuses. Education is supposed to be the road to Liberty!