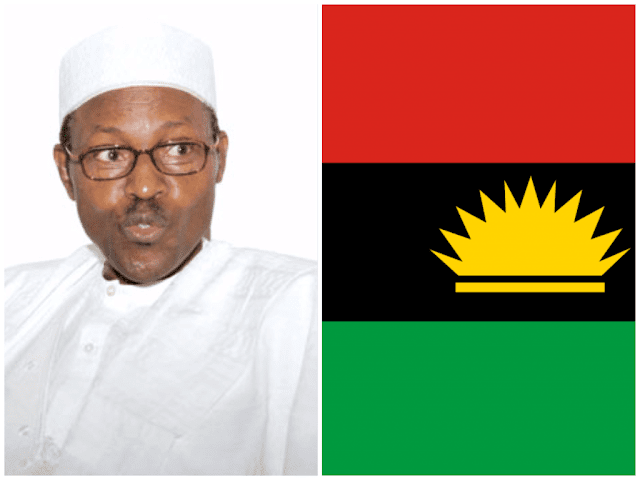 An Igbo proverb goes that, Ijiji ne nweghi onye ndumodu n’eso ozu ana. (The fly that ignores wise counsel always ends up at the grave with the corpse). That is where Nigeria finds itself today with President Muhammadu Buhari.

Rather than embrace simple dialogue, as canvassed by well-meaning Nigerians, Buhari chose to attend to the current Biafran crisis by brute force. Not unexpectedly, human casualties ensued, thereby swelling global sympathy for Biafra. To douse the current, Buhari quickly proscribed the Biafran youths as terrorists. As if that singular act lacks in folly, the Nigerian government listed the sponsors of the terrorists as the leading opposition party in the country, the People Democratic Party of Nigeria (PDP), France, Britain, and the Nigerians in the Diaspora, et cetera.

Not surprisingly, the inane attempt has turned Buhari into a ridicule home and abroad.

From the home front, the PDP has already done a return-to-sender, admonishing the president to look within. Without much incertitude, the opposition party inferred that if indeed it is the sponsor of the Nigerian terrorists, Buhari is then the Osama Bn Laden proper.

But the opposition party is no longer alone. Even notable members of Buhari’s own party, the leadership of the Nigerian Senate, Nigerian Bar Association, the Nigerian Labour Congress, religious groups, the crème of the Nigerian civil society, and well-informed Nigerian masses—all beg to differ with the president on his approach to the Biafran crisis. To the National Democratic Coalition (NADECO), a group most credited to the country’s return to democracy, Buhari’s action is “inconsistent with the constitution of the Federal Republic of Nigeria, and may be the beginning, if not checked, of the unwitting or witting subversion of democracy in Nigeria.”

On the international scene, Buhari is being roundly rebuked. The Great Britain, France, and the United States of America, for instance, have quickly reminded him that the activities of the Independence People Of Biafra (IPOB) in their respective countries are within the ambit of the law. The US added that while it stands for a united Nigeria, the country should explore dialogue in resolving the Biafran crisis and devising lasting ways for equity and fairness. The European Union, as a body, also weighed in, charging that labeling the Biafran activists as terrorists is a naked rape on democracy and human rights.

But the crescendo of the mockery brimmed when Buhari was in New York for the United Nations General Assembly. The first sign was the use of his speech to plead for dialogue to contain the North Korea dictator Kim Jong-un while at same time employing the use of force to resolve the Biafran crisis back in Nigeria. The second sign was when the president eked out time at the UN—to proclaim the Biafran activists as terrorists. Yet, the president could not muster the courage to introduce the matter in his speech at the assembly, especially considering that his brand of the Nigerian terrorists are of international dimension. After all, the leading UN security nations, particularly the Great Britain, France, and the United States were fingered as the Buhari’s “axis of evil.”

To rob salt into the open injury, thousands of Diaspora Nigerians, most of whom are card-carrying members of IPOB or, rather, the Nigerian terrorists, were openly protesting against Buhari’s dictatorship in in the front of the UN Assembly and in all major cities across the United States. Can you imagine members of terrorist Al Qaeda or ISIS resident in the US protesting at the UN?  The answer alone ought to make Buhari to have a re-think. But he may still not get it.

But how far can this ridicule go? How much more, please? Is Buhari’s government saying things for saying sake to keep the sinking ship afloat? If not, when is Nigeria going to severe diplomatic relations with the UK, France, and the United States for sponsoring or harboring the terrorists? Why did Buhari journey back to London from the UN for another round of medical vacation if indeed Great Britain is sympathetic to those terrorizing our country, Nigeria?

More, if the PDP is truly funding the Nigerian terrorists, as accused, what is the delay in arresting or at least quizzing the chairman of party, Ahmed Makarfi? If the Biafran activists are terrorists, as proclaimed, when is Buhari going to arrest their prominent echo chambers, particularly Mujahid Dokubo-Asari, Femi Fani-Kayode or Governor Ayo Fayose? Or, could it be that the Biafran activists are terrorists only if they are Nigerians of Igbo descent—and, more specifically, those who hail from the Southeast?

Without any iota of doubt, the logical answer to the last question sufficiently addresses all the other questions. That answer is Buhari’s seemingly Igbo problem. But this where I pity the president as well as myself. For there is no aspect of the man’s misery with Biafra today that I did not labour to forewarn.

But we have all come to find out the hard way: Muhammadu Buhari does not listen. He does not.

Fortunately, however, he has nowhere to go this time but to listen. In short, unless the former First Lady Patience Jonathan was right all along about the state of Buhari’s brain, it is about time nonsense paves way to common sense. The president should recognize that his current campaign against Biafra outside the shores of Nigeria is mere talk-n-go. He must recognize that the Nigerians in the Diaspora have become the country’s Biblical Joseph in terms of relationships with the outside world. Faced with injustice at home, most of these Diaspora Nigerians—the Igbo obviously not marginalized this time—have found favour in the foreign land, gaining profound prominence in all facets of global economy as well as politics.

Thus, if Biafra is synonymic with the Igbo, crushing IPOB and Nnamdi Kanu at the local front is no longer enough. For example, besides other Biafran groups in Nigeria, how about the many more in the Diaspora? Are such other Biafran organizations and their leaders in different countries, most of whom are distinguished in their chosen careers, including, high-ranking members of the armed forces, professors, doctors, nurses, lawyers, engineers, and business leaders also terrorists?

Similar questions might have been hovering in the mind of the veteran Nigerian philosopher, Benjamin Obiajulu Aduba, where he wrote that, “Biafra is not a Person. It Cannot be Killed by a Bullet.” Mazi Aduba noted that the growing popularity of Biafra has nothing to do with IPOB or Nnamdi Kanu but gross injustice in the land.
President Muhammadu Buhari needs help. He must be encouraged to listen—for a change. The current Biafran explosion is self-inflicted wound and only him can heal it. He must also admit that his hope of using the teetering exigency of terrorism to curry sympathy from international community is the height of hypocrisy. Unlike Buhari, the world knows that the true problem with Biafra is far from terrorism but the quest for equity and fairness which are vitally essential for a truly united Nigeria.

Be that as it may, so much is at stake. The masses, including this writer, invested so much hope on the current attempt for change in Nigeria. We truly want our president to have a successful tenure before he bids farewell at Yar’Adua Square in May 2019. The worst thing that can happen to Nigeria is neither the fear of IPOB nor Nnamdi Kanu. It is a failed Buhari presidency which can potentially signal the return—so soon—of the virally corrupt empire in the name of People Democratic Party of Nigeria. True.

(Ogbonnia writes from Houston, Texas, and can be reached via: SKCOgbonnia1@aol.com)
Posted by PublicInformationProjects at 01:24