News Release: Anambra 2017: Time To Move From Voodooist Utterances To Issue And Governance Based Campaigns 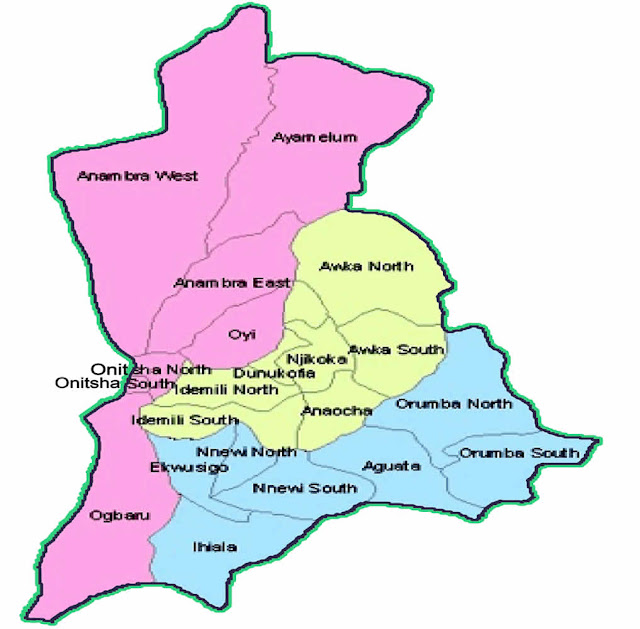 Anambra Governorship Candidates must move away from their present voodooist utterances and sloganeered irrelevancies that have occupied the State’s political space and its gubernatorial discourse; and face the State electorates with issue and governance based campaigns.

The Candidates must also understand or be  made to understand that Anambra Gubernatorial contest is not a contest for the seat of “Executive Chairman” or “Chief Executive Officer (CEO)” of “Anambra State Nig. Ltd.”; or “Anambra State Public Liability Company (PLC)”. It is further not a Seat for political charlatanism, favoritism, nepotism, violence, exclusion, segregation, dichotomy and vendetta.

These gory attributes of the present central Government in Nigeria must not be allowed by all lovers and defenders of democracy and civil government to rear their ugly heads in Anambra State. Anambra State as a super State with super people in Nigeria must be made to wear such look at all times. Governance of the State must be left and entrusted in the hands of the people of nobility and aristocracy.

The leadership of Int’l Society for Civil Liberties & the Rule of Law (Intersociety) has, therefore,  keenly watched the campaign modes and slogans of the “first class” Governorship Candidates for November 18th gubernatorial poll. We are disappointed, shocked and appalled by the sad development and make bold to say the campaigns are substantially, if not totally dominated by voodooist utterances and other irrelevancies that have no direct or indirect bearing on collective welfare and affairs of the People of the State.

These we expressly find to be motivated by “mercantilist mindsets of some contestants” that still see the State seat of power and its public treasury as a “public goat that is owned by nobody”. There are those or malevolent political actors who equally see and treat the State coffers as “ elephant meats that never finish”. These political actors when allowed access to power; not only constitute over-bloated cabinet tailored in nepotism and favoritism, but also steadily misappropriate and misapply lean public resources; thereby starving the State’s critical sectors of direly needed development, maintenance and management funds and leave them in acute quandary.

We therefore call on the 2017 Anambra Governorship Candidates to rewind and speak to the electorates of the State in the plain language they will and ought to understand. This is no longer time for recruitment of internet warriors to engage in fierce voodooist and calumny campaigns; or procurement of costliest pages in the newspapers and television/radio news bulletins; or running of image damaging commentaries on sponsored public and private owned radio stations.

These hostile and malicious languages and signs are strange and grandly unacceptable to our democratic and civil governance traditions. Anambra Governorship Candidates must go back to the drawing board and come back with popular and traditionalized signs and languages tailored in conventional electioneering and civil government leadership quests or government of the people by the people and for the people.

The incumbent Governor who is seeking for a constitutional second term must go beyond rhetoric without grounded and provable governance facts. A saying still goes that “a chicken with broken leg (s) is hardly sold at homestead market”. It is time for the incumbent to move away from governance simulations to governance realities. Those who will vote in the 18th November election are not those watching television hyped news or reading sponsored newspaper pages in Abuja, Lagos, Kaduna, Kano, Port Harcourt, Owerri, Aba, Enugu or Americas, Europe and Asia. The voters are here, live and direct; and scattered in all the 177 Communities and urban centers of the State.

Our critical questions to the incumbent Governor which are fundamental determinants for his reelection bid are: how much direct foreign investments have been attracted to Anambra State since first quarter of 2014? Where are they located in the State, if any? What are they producing? What is the total amount of tax from such foreign investments (if any) paid into Anambra coffers so far? How many citizens of Anambra State and their neighbors have been employed?

The $5million annual pumpkin leaves (Ugu) export conundrum also direly needs the following clarifications: Kenya is the world largest exporter of flowers and where they are packed waiting to be processed for export usually occupy acres of land. In the case of $5m Ugu export: where are the locations of “industrial Ugu farms” in Anambra State? Are they private or State owned or PPP (if any)?  What locations in the State are these industrial Ugu being assembled for procession and export?  How are they being industrially exported; by marine or aviation; and with or without relevant Federal agencies’ involvement or supervision? Does Anambra have airport or seaport to export $5m per annum valued at $410,000 per month (N150M)? Have the annual proceeds of the Ugu export valued at over N1.8B been reflected in the State’s income budgets? These questions are also extended to other parroted farm produce said to be industrially exported by the Obiano Administration.

Other critical questions for the incumbent/contesting Governor are: What is the state of Anambra’s foreign and local debts profile since March 2014; decreasing or increasing geometrically? Anambra had multibillion naira worth of moveable (liquid) or cash investments in several quoted companies and expatriate others; are they still intact; if yes, what are their total market values today; if no, how come and where are they? How many kilometers of roads inherited from the immediate past administration have been completed since 2014 and how many have been started and completed since 2014?

How many kilometers of roads have specifically been awarded and completed since 2014 in  strategic areas and communities in Onitsha South and North, Idemmili North and South, Ogbaru, Oyi, Nnewi North and South, Ihiala, Ekwusigo, Aguata, Anaocha, Orumba North and South, Njikoka, Dunukofia and Awka North and South? Computers and giant power generators were distributed to public and mission schools in the State before 2014; are these still intact or diverted or stolen?

What is the state of failed portions of existing road network in those areas and LGAs above mentioned? When was the last time school and health facilities and equipments including cash, lab and library materials and resources; buses, cash and physical structures were donated or distributed to public and mission schools and hospitals in the State? How much does the incumbent Governor collect as monthly security votes and how is it spent?  How much has been collected by the Governor in the past three-and-a half years or 42months as security votes?  What is the incumbent Government’s cabinet size and how much is the State’s total monthly wage bill? What does the incumbent Governor spectacularly have for the People of Anambra State warranting his second term bid?
To other candidates in the coming election particularly those of the PDP and the APC; our critical questions are: What is the topography of Anambra State including its boundaries and square kilometer measurement? How many kilometers of Trunks A, B and C roads are in the State? Between aviation, marine and road, which one is mostly used and important to the People of Anambra State? When was the last time the existing Anambra Road network was expanded or added with virgin kilometers? How many kilometers of new roads will be asphalted and completed every year if any of them wins? What are the Candidates’ policy directions (if any) in urban planning, waste and environmental management (including reckless blockage of gutters and drainages), health, education, water, maintenance and management of existing key infrastructures such as roads, spaces, etc? How many State or public cemeteries (if any) are in Onitsha, Ogbaru, Nnewi, Ekwulobia, Ihiala, Oyi, Idemmili North, Dunukofia and Awka?

Are the Governorship Candidates ever aware of the availability of “the Charter of Responsibilities for Public Office Holders”, contained in the Chapter 11 of Nigeria’s 1999 Constitution? Specifically, are they aware or have they read and studied Sections 13-21 of the Constitution under the Fundamental Objectives and Directive Principles of State Policy? What do they understand by “security and welfare of the people” (s.14 (2) (b)? Is their idea of security still revolve around the existing archaic and crude methods of securitization in Anambra State partly introduced by the Peter Obi Administration (i.e. demolition of buildings belonging to suspected violent criminals even when investigation are yet to be completed or  outside court order or confiscation)? Have they ever heard of UNDP’s conceptualized Human Security and its Seven Dimensions or Peopling Security?