News Release: Enough Of All These Provocations: CLO South East To FG, Army And SE Governors 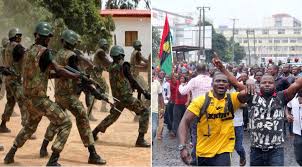 The Actions and inaction of the President Buhari led Federal Government of Nigeria, the Nigerian Army and the South East Governors over the ugly scenario in Abia State and by extension; Igbo land is provocative and therefore, leaves much to be desired.


The South East is not at war and prior to the deployment of troops and armoured tanks into Abia and other states, we had warned against the militarization of the zone noting that such moves instead of providing security will further aggravate and escalate agitations and tensions thereby producing a negative effect.

The Constitution of the Federal Republic of Nigeria, 1999 as amended specifically outlined the composition, roles, command and operational rule of the Armed forces in Section 217 and 218 with its accompanying subsections.

The duties of the Army as clearly spelt out in Section 217 (2) (a)(b)( c) clearly stated that “The Federation shall subject to an Act of the National Assembly made in that behalf, equip, and maintain the armed forces as may be considered adequate and effective for the purpose of  (a) defending Nigeria from external aggression, (b) maintaining its territorial integrity and securing its borders from violation on land , sea or air,(c) suppressing insurrection and acting in aid of civil authorities to restore order when called upon to do by the President but subject to the conditions as may be prescribed by an Act of the National Assembly and (D) performing other functions as may be prescribed by an Act of the National Assembly.
Going by the various constitutional provisions, it is clear that the Army has been acting in complete violation of the constitution of the country by not only usurping the functions of the police as stated also in section 215 (3) of the same 1999 constitution but also visiting some communities and people of the South east with brute force leaving in their trail, sorrows, tears and blood.

President Buhari and the Army cannot claim to love the people of the South East more than they love themselves. The people have not cried out to the FG to save them from any uncontainable situation in recent times and neither were there any far reaching consultations before the launch of the Operation Python Dance 2.
Several Igbo groups have stated their position rejecting the siege of the South East in the name of Python Dance but the FG and the Army still insisted on carrying on with the operation.

It has now become clearer to all and sundry that the launch of Operation Python Dance was simply a decoy for the invasion of the South East by soldiers with a premeditated plan of not only annihilating the IPOB members and their leader, Mazi Nnamdi Kanu but to rapaciously commit bloodshed of another unimaginable magnitude  against the Igbo.

In a constitutional Democracy, the military onslaught in Abia State and various cases of brutality, torture and other forms of dehumanizing treatments meted on unarmed citizens of Nigeria are crimes against humanity and such perpetrators can never go unpunished.

We say no to the Army of Occupation and subtle genocide going on in Igbo land. The CLO unreservedly condemns in its entirety these military actions and hereby call for the intervention of the International Community over these anomalies.  Stop the siege in the South East and withdraw the soldiers immediately.

Military classification of IPOB as a terrorist organization is illogical

It is the position of the CLO, South East Zone that the Nigerian military and by extension, Buhari led administration has ridiculed the country among the comity of nations globally by its pronouncement of the Indigenous Peoples of Biafra as a terrorist organization.

The provisions are clear under the Terrorism Prevention Act 2011 (as amended in 2013) whose duty and procedures to follow in declaring a group as terrorists.

The reasons listed by the Director, Defence Information of the Nigerian Army, Major General John Enenche for the classification of IPOB as a terrorist organization makes the whole statement more laughable and ridiculous.

The group has maintained their non violent stance in their struggle while no military or any other intelligent agencies in Nigeria have traced weapons and arms of any sort from them. Instead of being violent and terrorist inclined as they were labeled by the Army, members of IPOB have been victims of state sponsored violence and killings while the blood of many already spilled are yet to get justice.

To the South East Governors: Stop behaving like inferior people in Nigeria

The outcome of the emergency meeting of the Governors of the five South East States with some other selected invitees is to say the least another provocation on the people they govern.

The CLO is worried over the behavior of our Governors who act most times as if they are second class and inferior among their fellow governors from other zones and members of the Federal Executive Council thereby making them unable to be men enough to ‘fight’ for the interest of their people.

We are tempted to believe the assertion in some quarters that our Governors take orders from the ‘caliphate’ and cannot attempt to injure the sensibilities of the ‘Aso Rock power brokers ‘hence they are always tongue tied and hands-in- cheek whenever occasion demands that they should rise up with requisite action in anger and reject any slap on the face of the Igbo.

A meeting of the South East Governors with the GOC 82 Division of the Nigeria Army in attendance could not devote 1 line in their 11 point Resolutions to condemn the Army occupation of the South East and their mindless atrocities and killings so far perpetrated in Abia State only to summarily announce the proscription of all activities of IPOB.

The governors failed to realize that the discontent and agitations from separatist groups in the zone partly arose from the frustrations occasioned by their alienated governance which seems to favour the few at the detriment of the majority thereby breeding lots of unengaged youths.

While Fulani herdsmen unleashed series of violence and killings in the South East, the Governors of the South East despite repeated calls to that effect by the CLO could not sponsor Executive Bills to their Houses of Assembly criminalizing open grazing, yet, they are now quick to proscribe IPOB activities.

There is no hope for the South East if our Governors cannot take up the lead in condemning anything that affects the people they govern, fight for the zone’s equitable share from the Centre  in the ‘authoritative allocation of values’ and resources or ‘who gets what, when and how’ which politics is all about.

Last line:  We call on President Buhari to be mindful of the transient nature of power. Some past leaders of nations ended up at the International Criminal Courts to answer charges of genocide and crimes against humanity.  Former Prefect, Congregation for Divine Worship, Vatican City, Rome, Francis Cardinal Arinze in a public lecture recently noted that Dialogue is a very necessary way to peace. As opposed to the language of violence and using instruments of coercion at all times, the country will achieve more if options of dialogue, consultations and consensus are applied more than the body language of threat and dealing with dissenting voices.

Ironically at a time where there is this discontentment in the land, Mr President is billed to participate and speak at the 72ndsession of the UN General Assembly on Tuesday September 19, 2017 with the theme – “Focusing on people, striving for peace and decent life for all in a sustainable planet”.  We are still wondering what will be his position paper in the session going by what is festering in Nigeria and his wrong approach to the whole issue.