News Release: IPOB Is Not An Unlawful Society/Organization 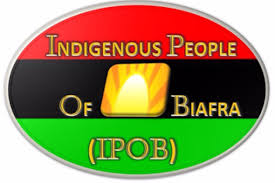 The Indigenous People of Biafra (IPOB) under the Leadership Team of the Directorate of State (DOS) hereby state that the time has come for the dismissal, arrest, and prosecution of Major-General John Enenche for contempt of court and usurping the roles and responsibilities of the Judiciary by unilaterally declaring IPOB as a terrorist organization without obtaining any court pronouncement. During an ill-informed and contemptuous press release, the 51-year old John Enenche stated that the Nigerian Army has declared IPOB a terrorist organization. This declaration is not only judicially provocative and belligerent, the Idoma-born army officer acted beyond the mandate of the Nigerian Army as specified in Sections 10 & 11 of CAP A20 Laws of the Federation of Nigeria (L.F.N.) 2004 and in Section-217(2) of the Nigerian fraudulent constitution.

For those who do not know, what constitute the acts of terrorism are well defined in Section-1(2) of Terrorism (Prevention) Act of 2011 and as amended in 2013. In the same Terrorism (Prevention) Act of 2011, Section-2 stipulated that only a Judge can declare an organization proscribed based on proven case of acts of terrorism and such case will be presented to the Judge through an application made by the Attorney General or the National Security Adviser or the Inspector General of Police with the approval of the President. The Judge’s declaration will thereafter be gazetted.

The questions that now beg for answers are: (1) Does the Director of Defence Information (DDI) of the Nigerian Army (Major-General John Enenche) fall into any of the three categories of persons that should make an application to a Judge to declare IPOB a terrorist organization? (2) Which Judge did the DDI make such application to and was it approved by the President prior to submitting the application? (3) Where is the approval given to the DDI by the Judge? (4) When and where was the Judge’s declaration gazetted?

From a careful review and analysis of (a) CAP A20 L.F.N., (b) Section-217 of Nigerian fraudulent constitution, and (c) Terrorism (Prevention) Act of 2011, the Nigerian Army and its DDI have deceived the public by illegally declaring IPOB a terrorist organization. In particular, this deceitful act is a violation and interference into the Judicial arm of government and it is an overreach. It is also a deliberate act in contempt of a subsisting ruling in a competent court of law. The perpetrator of this crime, Major-General John Enenche, must be dismissed from the Nigerian Army, be arrested after his dismissal, and be prosecuted and jailed for contempt of court. This will serve as a deterrent to others who flagrantly and frequently violate the Laws and even contravene the Nigerian fraudulent constitution such as the ongoing unconstitutional “Operation Python Dance-2.”

The Indigenous People of Biafra (IPOB), whether led by Nnamdi Kanu or led by the DOS, is not a terrorist organization because no court of competent jurisdiction has so declared it. The so-called declaration by Major-General John Enenche is null and void and of no effect. The public should accordingly ignore such illegal and ill-advised declarations. The DOS assures all men and women of goodwill that the restoration of the nation of Biafra is a divine project whose time has come and is, therefore, unstoppable, unquenchable, irreversible, and irrevocable.

Long live IPOB and long live the nation of Biafra!!!