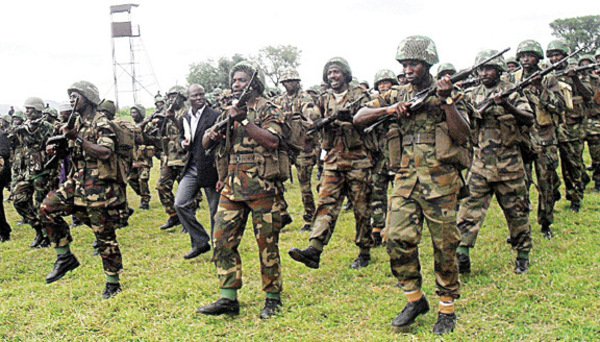 A few days ago the social media was awash with display of movement of tanks and other heavy military equipment into the South-East, the heartland of Alaigbo.

This has been followed up and confirmed by the Press Briefing by the Chief of Training and Operations, Army Major General DD Ahmadu on what he calls Exercise Egwu Eke (Operation Python Dance).

According to him, the operation involves the deployment of a whole Division of the Nigerian Army, composed of five Brigades based in Abia, Anambra, Ebonyi, Enugu and Imo States, all in the South Eastern States.

The operation is being conducted with the involvement of other security agencies such as Department of State Services, the Nigeria Police and Nigeria Security and Civil Defense Corps, all of whom are to engage in raids, cordon and search operations, anti-kidnapping drills, road blocks, check points and show of force, etc.

Hundreds of Igbo farmers and their children have been killed, their women and daughters raped not only in Alaigbo but in several other non-Fulani areas of Nigeria. In all these the Nigerian Police and other security forces had looked elsewhere while those atrocities have been committed against them by Fulani herdsmen armed with sophisticated weapons.

This is Military Invasion and Occupation of Alaigbo, nay, Declaration of War against peaceful citizens of Alaigbo!

This is indeed an invasion of Alaigbo by the Arewa-controlled and dominated Nigerian military which recently witnessed unimaginable retirement of a great number of Igbo high-ranking officers. This is a Nigeria in which the South East is completely excluded from membership of Nigeria’s highest Security Council, in clear violation of the federal character principle as enshrined in the subsisting Federal Constitution.

This show of force is another attempt to demonstrate to the World that ALAIGBO and the rest of Nigeria is a conquered territory.
This occupation of a peaceful law-abiding Igbo nation is unconstitutional by the extant Constitution of the Federal Republic of Nigeria.

This is another level of insurgency and terrorism to complement the insurgent Fulani AK47-weilding herdsmen who have been terrorizing, taking over and destroying our farmlands, sacking our ancestral homes, killing our men and women, raping our women and daughters, insulting and attacking our Christian faith; all these are done with the connivance of the Security authorities of Nigeria.

The duty of the military is to protect the country from external aggression. Maintenance of Internal Security belongs to the Police.

The responsibility of internal security is that of the Police and non-military agencies.

The President’s powers to deploy the Nigerian  Armed Forces are provided for in Sections 217 and 218 of the Constitution.

The circumstances and conditions under which the Nigerian Armed Forces can be deployed are as follows:

For the defense of Nigeria from external aggression,
For the maintenance of the territorial integrity of and securing the borders of Nigeria from violation on land, sea and air.

For suppressing insurrection and acting in aid of civil authorities to restore order when called upon to do so by the President, subject to such conditions as may be prescribed by an Act of the National Assembly.

It is, therefore, clear that the planned invasion and occupation of the South-East, the heartland of Alaigbo is a flagrant breach of the Constitution and as such an impeachable offence.

With the hate songs against the Igbo that have flooded the airwaves in Arewa North and the hanging Quit Notice on the Igbo from the North, ADF sees this military invasion as a coordinated and deliberate action to proactively cripple any opposition and cow and emasculate the Igbo heartland as a complement to the planned annihilation of Igbos in the North by the Arewa Youths during the same period.

With the burden of history, especially the events of 1966- 7, and under the menacing present ominous circumstances, the Alaigbo Development Foundation (ADF), as a Corporate body of patriotic citizens , shall :
Challenge the planned military invasion and occupation of Alaigbo in the Court of law and seek declarations, by the courts, that the action of Mr. President is an infringement on the Constitution, as amended.

Call on various Igbo groups, the traditional institution, the church and other elders of Igboland including Ohanaeze Ndigbo to raise their voices against the invasion of Alaigbo.

Send further protest representations to the International Community on the latest attack and occupation of Alaigbo.

Call on other patriotic and well-meaning citizens and nationalities in Nigeria to come to the aid of the Igbo nation at this time of another planned pogrom against Ndigbo. What else can we call this except FASCISM enveloping the entire Federal Republic of Nigeria.

The elders of Alaigbo and all patriotic Pan-Igbo organisations should liaise with the Governors in Alaigbo in spearheading an Emergency Political Conference of Ndigbo to holistically address the future of Alaigbo and deliberate on the continued threat and assault on our fundamental rights of self-determination and peaceful existence as a freedom-loving people.

Meanwhile, all Igbo groups worldwide should device means of continuing to inform the International Community about what is happening to their people at home and thereby seek their sympathy and intervention, where necessary and possible, to help save Ndigbo against another looming genocide in Nigeria.

Dr. Dozie Ikedife
(Chairman, Board of Trustees)
Posted by PublicInformationProjects at 10:52