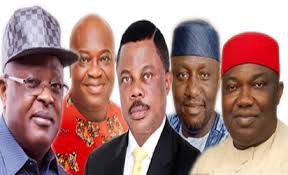 Nnamdi Kanu of Indigenous People of Biafra (IPOB) has been declared wanted for not showing up in court. That is normal. But if the truth is told, the main culprit for the Biafran crisis are the politicians—not Kanu. The authorities should be knocking at the doors of the seven Nigerian governors of Igbo extraction, namely: Nyesom Ezenwo Wike (Rivers); Ifeanyi Okowa (Delta); Ifeanyi Ugwuanyi (Enugu); Okezie Ikpeazu (Abia); Rochas Okorocha (Imo); Willie Obiano (Anambra); and David Umahi (Ebonyi). These governors, one after the other, openly inflamed and fueled the Biafran crisis to a sadistic state. Given that Nigerian governors are immune from prosecution, it is incumbent upon the masses to send them packing.


For sure, the history will not forgive President Muhammadu Buhari for his mulish leadership in the current Biafran crisis. But the role of the Peoples Democratic Party (PDP) is obviously worse. Then in fervent fear of the probable consequences for their corrupt deeds post-Jonathan regime, the leaders of PDP from the East unleashed a montage of separatist propaganda against the incoming Buhari government. The following innuendo from Nyesom Wike in the waning days of his governorship campaign in 2015 says it all:

“I will lead a war against them (Nigeria) like Ojukwu. Am not joking, I know am on air, and I am warning them now. Any attempt to rob us the way they rob our brother (GEJ) the battle will start from Rivers State. We will remain opposition state like Lagos. In fact, we from the South-South and South-East we remain in PDP. We leave the South-West and North to run APC. That is how they tactically shared the Country. And we will not allow them use our resources to develop their States…I want all South-South and South-East to remember this...”

The youth from the area have since answered Wike’s call, and that is your Biafra. Today, after gaining power and obviously still panting, thanks to the Buhari anti-corruption phobia, Mr. Wike is interestingly grandstanding as an arrow-head of Biafran opposition. Governor Ifeanyi Okowa of Delta State is, of course, guilty of similar shenanigans, but the shaming detail does not need to be retold here. Instead, see my piece: “Biafra and Corruption: When a Judas Becomes a Muhammad”.

But the most shameless yet is the activity of the five stooges who operate under the aegis of South-East Governors Forum. From the time President Buhari polluted the Nigerian electoral history with his infamous gaffe to marginalize the states that did not vote for him in 2015 elections, these governors wasted no time to inundate the polity with harrowing tales of injustice towards the Igbo. The propaganda was widely insurgent. Even Governor Rochas Okorocha, a fellow member of Buhari’s party, had the moxie to make the statement that follows:  The Igbo “have nothing to show that we are part of the Nigerian project; neither do we have any sense of belonging in the present government at the national level.”

This perceived marginalization, not surprisingly, escalated the Biafran agitation to a global proportion. More poignantly, the situation drove President Buhari to naively join a group of Igbo governors to declare millions of innocent Nigerians agitating for Biafra worldwide as terrorists, thereby further damaging the image of the country worldwide.

The quagmire above is nothing compared to what you are about to read below.

With the damage already done, Buhari decided to do what he had refused to do from the start: Dialogue. The date was Friday October 13, 2017. The venue was the Presidential Villa, Abuja. The attendees were the president himself and South-East politicians, controlled by their governors. And the world waited anxiously.

The ‘wise men’ from the East finally emerged from the meeting. To the chagrin of a mopping society, the South-East governors had done a complete U-turn, saluting General Buhari as the fairest and most equitable leader. For avoidance of doubt, here are the exact words of David Umahi--the spokesperson for Southeast Governors Forum--to President Buhari: “You have no hatred for any state. You have treated all states with equality. What one state gets in the north, the other gets in the south.”

So, what changed before the face-to-face meeting with President Buhari? What of the well-chronicled lopsided appointments? What about the fact there is no Igbo man or woman in the leadership of the nation’s security apparatus? What of the recent postings in NNPC that drew the attention of an elder statesman like Edwin Clarke to write Mr. Buhari to reverse for the simple reason that the Igbo are marginalized? What about the hoopla that Buhari treated the Fulani herdsmen and the Arewa Youth of the Quit Notice jazz with kid gloves while blowing the Biafran agitators with iron hand? What changed?

The simplest answer is that we, the Nigerian masses, are not fools. These Igbo governors, all of whom are the ground goons of the Nigeria’s corrupt oligarchy, have been exploiting the Biafran crisis to a selfish end. The aftereffect of this mass deceit has been grave. Many lives as well as businesses were lost, nationhood questioned, and democracy betrayed. More, with Boko Haram terrorism in the North, and the Biafran terrorism now being promoted in the South, Nigeria might have inadvertently acclaimed herself as a terrorist nation. But there must be consequences for bad behaviour. Thusly, instead of the teetering threat of election boycott by IPOB, the masses must rise to ensure that none of these Igbo governors returns to power, starting from the forthcoming Anambra election in November. Please.

(Ogbonnia can be reached through SKCOgbonnia1@aol.com)
Posted by PublicInformationProjects at 11:01