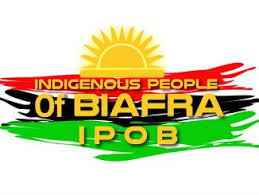 The Indigenous People of Biafra (IPOB) under the Leadership Team of the Directorate of State (DOS) hereby inform all Biafrans to distance themselves from the information contained in a recent press release by an Igbo-centric organization that goes by the acronym “MOBIN.”

According to these group of Igbo folks, the full name of their “Igbo-only” organization is Movement of Biafrans in Nigeria (MOBIN). These Igbo folks initially launched this Igbo-centric MOBIN as a political wing of a faction of IPOB led by another group of aged Igbo men collectively called Supreme Council of Elders of IPOB. At the point of their public unveiling, this Igbo-centric MOBIN announced that they have signed a memorandum of understanding with another Igbo-only political party called United Progressive Party (UPP). However, in the recent press release of 28th of October 2017 and signed by  Mr. Emeka Emekesiri Esq, MOBIN has now changed their allegiance to yet another Igbo-only party called All Progressive Grand Alliance (APGA).

The DOS would have simply ignored this press release issued by what looks like a group of political hacks and opportunists from Igbo-speaking area of Biafraland but three reasons compelled the DOS to make a response.

First, the DOS wants to continually emphasize that Biafra is not about the Igbos only. The nation of Biafra comprises the entire South-East and South-South geo-political regions plus Idoma in Benue state and Igala in Kogi state. It is shameful and disgusting for MOBIN to identify Biafra as having a population of 70 million (referring to Southeast/Southsouth/Idoma/Igala) in bullet-point #2 of their press release, only to pigeon-hole Biafra into an “Igbo Nation” as stated in bullet-point #4 of the same press release. What message is MOBIN trying to convey to Alhaji Mujahid Asari-Dokubo, the Alabo Edi Abali of Kalabari Kingdom, who has littered his Facebook Page with messages affirming his Biafranism? By making Biafra an Igbo-only affair, what impression is MOBIN creating in the minds of  family members of General Phillip Effiong,  Brigadier Willie Archibong, Col. Nsudoh, Lt. Col. Frank Okilo, Mr. N. U. Akpan, Mr. Okon-Okon Ndem, HRH Frank Opigo, Mr. Ekukinam Bassey, Mr. Ignatius Kogbara, Dr. S. J. Cookey, and many other notable Biafrans who are not from the Igbo-speaking area of Biafraland?

Second, the entire Biafrans, through the authority invested in the DOS, have determined that they will no longer participate in the Nigerian political process but will rather welcome a process that will lead to a United Nations-mandated and supervised Referendum on Biafra. By participating in Nigerian political process, MOBIN is unwittingly endorsing the Nigerian fraudulent constitution which lied that Nigerian citizens enacted, made, and gave the said constitution unto themselves. How can MOBIN reconcile their claim to restore Biafra with Section-185(1), Schedule-7, and Section-2(1) of that very fraudulent constitution? Is MOBIN aware that Nigeria’s unity is not negotiable as long as they recognize and obey all the provisions of Nigerian Constitution, especially Section-2(1)? It appears that MOBIN is unaware that Section-188(2b) of that fraudulent constitution shall be activated if any Governor ventures into Biafra restoration process because doing so will be a violation of Schedule-7, Section-1(2) and Section-2(1) of the same fraudulent constitution.

The third reason for responding is because MOBIN lied in their assessment of the current alcoholic governor of Anambra state who has reversed all the gains made in the state prior to the coming of his Administration. The DOS strongly advise everyone to access and read an open letter to the current governor of Anambra state written by a Southeast-based Human Rights Organization called INTERSOCIETY. The open letter can be accessed through any of the following links:
http://www.intersociety-ng.org/component/k2/item/298-anambra-electorates-demand-for-governance-scorecard-of-your-excellency%E2%80%99s-1st-term-government

http://www.allnewsandreports.com/intersociety-writes-open-letter-to-obiano-demands-performance-score-card/
While the DOS and entire Biafrans are not interested in the Nigerian political process, we must make sure that lies, innuendos, and propaganda by groups such as MOBIN are exposed, deconstructed, and destroyed. The socioeconomic lives of Biafrans can never be improved as long as the fraudulent constitution of Nigeria exists. Section-4(2) and Schedule-2 (Part-1) of that fraudulent constitution alone are enough to bring Biafrans to lives of servitude and destitution. Do we need to remind MOBIN that it is an impossible task to insert clauses in the constitution that would allow Biafra to exit Nigeria considering Section-9 of that fraudulent constitution which gives undue advantage to the Arewa region of Nigeria when amending the constitution?

This is why the DOS-led IPOB became a member of a coalition platform called Lower Niger Independence Movement (LONIM) which has a roadmap that includes UN-mandated and supervised Referendum that will lead to the restoration of the nation of Biafra where a constitution shall be generated and approved by the ordinary citizens. The Biafran constitution will be a contrast with the Nigerian scenario in which General Abdulsalami Abubakar single-handedly wrote the fraudulent constitution and forced it down the throats of Nigerians and groups like MOBIN.

In conclusion, the DOS reiterates that Biafra is not an Igbo-only affair as being postulated by the Igbo-centric MOBIN. Also, Biafrans are not interested in the political process of Nigeria because doing so will give credence to the fraudulent constitution. Finally, Biafrans are enjoined to give their maximum support to LONIM as the coalition platform working steadily and steadfastly for the restoration of the nation of Biafra through a UN-mandated and supervised Referendum. MOBIN can mobilize as much Igbo political hacks as they can muster but that is not the concern of real patriotic Biafrans because all Biafrans have determined that the restoration of the nation of Biafra is a divine project whose time has come and is, therefore, unstoppable, unquenchable, irreversible, and irrevocable.