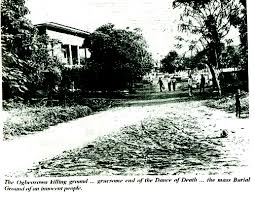 (Being an address by Professor Uzodimma Nwala, President of Alaigbo Development Foundation, on the Occasion of the 50th Commemoration of the Asaba Massacre at the Grand Hotel, on October 7th 2017)

I speak to you on behalf of the Alaigbo Development Foundation (ADF).
It is an organization founded by patriotic citizens from all parts of Alaigbo.

We had earlier sent our message to the Palace of Nnanyi Agu – the Asagba of Asaba – through the Organizing Committee of this hallowed event – the 50th Commemoration of the Asaba Massacre of October, 1967.

In the message, apart from identifying with the Asagba of Asaba and his cabinet as well as with our kinsmen and women from Asaba, our Anioma brothers and sisters and, indeed, the entire Igbo race on the 50th Commemoration of the Asaba Massacre – the darkest chapter in our history, we have urged all of us to reflect very deeply into the meaning of this episode in our history and what it means for our future.

Indeed, the gruesome cold-blooded killings of innocent civilians by troops of the Federal Republic of Nigeria, culminating in the “DANCE OF DEATH” at Ogbeosewah in Asaba on October 7th, 1967, where hundreds of helpless people were mowed down and buried dead or alive in a mass grave, is the darkest chapter in our history which we must continue to recall for the benefit of our children including those yet unborn.
The Alaigbo Development Foundation (ADF) salutes the courage of those who have continued to provide us the records of the event as well as the opportunity to honor the memory of our people who were victims of this sad and unforgettable event.

We salute the courage of the Asaba people and their noble spirit. We salute the courage of people like Professors Elizabeth Byrd and Frazier Ottonelly who have sustained the records for the sake of history. We also salute our brother Emma Okocha, author of the immortal work - The Blood on the Niger – a book that will perpetually challenge the conscience of men and women of good conscience throughout the ages.
We salute the courage of our brother, Ifeanyi Uriah and other survivors of that genocide. Ify was with us at the International Colloquium on
the Igbo Question in Nigeria. The Asaba Massacre featured strongly at that event in our search for the roots of Igbo predicament in Nigeria.
His eye-witness account of that massacre presented on that occasion is captioned Ogbeosowah: The Rise from the Dead. An Eyewitness
Account. It is published in the two volume publication that came out of that Colloquium with the title IGBO NATION: History and Challenges
of  Rebirth and  Development,

One of the presentations at that Colloquium which we have continued to cherish is a presentation by Dr. Luke Aneke, It is captioned On The
Jewish Example. In that work, Luke recalls how the Jews have handled their similar experience in history – The Jewish Holocaust - to make sure no such experience happens again in their history. With the help of the international community, they have continued to hound all those who took part in the Holocaust. One of the notable cases is that of Mr. Kurt Waldheim, former Secretary-General of the United Nations who was pursued as an actor during the Jewish holocaust. Even as Head of State of Austria, he was unable to move freely within the international Community until he died. ADF believes that, if not ourselves, our children and children’s children will pursue this historical cause in ensuring that justice is done to the spirit of those innocent people whose blood was spilt because they were Igbos – Yes, Asaba Igbos!

ADF will like to be associated with the project of a befitting Memorial, possibly a War Museum in Asaba in Memory of the victims of the Asaba Genocide.

We can’t be done without paying glowing tribute to our father and historical icon, a man of immense global stature who has done a lot for the cause of Alaigbo, whose Igbo-ness compelled him to take a wife from the other side of Alaigbo - what else could be a stronger show of Hand-Shake Across the Niger in warm embrace of Igbo sons and daughters. We mean none other than Chief (Dr.) Sonny Iwedike Odogwu, the Ide Ahaba.
We salute the memory of Chief Dennis Osadebay, the first civilian governor of the Midwest Region and Secretary of Igbo State Union. So do we salute the memory of Ambassador Ralph Uwechue, the former President-General of Ohanaeze Ndigbo.

We cannot also end without paying glowing tribute to our son, Chukwuma Kaduna Nzeogwu, the leader of the idealist patriotic youth who rose in great show of patriotic love for what they felt was a genuine fatherland.  Despite the avoidable aftermath of the revolution they set in
motion, we do acknowledge that age and lack of adequate experience was responsible for the mistakes they made in actualizing their revolution. How else could one explain the mistake of General Emeka Ojukwu to have committed Biafra soldiers to the Midwest as well as the Western gamble in response to an appeal by Chief Awolowo for Biafra soldiers to be sent to liberate the West from the occupation of northern soldiers, Neither Azikiwe, Okpara nor Chief Dennis Osadebe could have sanctioned that gamble.

Igbo intellectuals have consistently demonstrated our common identity as Ndigbo. In 2008, we came here, about fifteen pan-Igbo organizations led by the Conference of Democratic Scholars (CODES) to celebrate the FIRST FESTIVAL OF IGBO CIVLIZATION to mark the 50th Anniversary of the publication of the epic novel written by Chinua Achebe –Things Fall Apart.

Finally, the greatest additional response which history demands of us is to consolidate and sustain that identity for which those brothers and sisters suffered such unspeakable pains of death. While we remember and forgive, we must never forget who we are.
Posted by PublicInformationProjects at 08:43