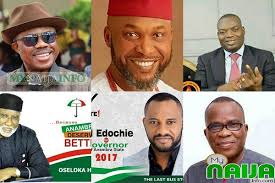 The recent threat of “vote and die” issued against the homeland Igbo population especially the citizens and residents of Anambra State including the State’s 2.15m registered voters by the Uche-Mefor deputy leadership of the Indigenous People of Biafra (IPOB) as well as the militarization of the poll security by Buhari led Federal Government must not be allowed to scare away Anambra voters, resulting in some say; “ federal executive desperation to rig the Poll and capture Anambra State at all costs”.

In other words, Anambra Voters are passionately appealed to come out massively and vote for the candidates of their choice and ignore ‘vote and die’ threat and attempts to further scare them away through militarization of Anambra voting arenas by Nigerian security forces. Every member of Anambra public wanting to go out on 18th November 2017 is strongly advised to be armed with his or her voter’s card and those without voters’ cards have no business going to public arenas in the State until election period is over. In the event any citizen with voter’s card and law abiding is harassed or arrested by any security operative, the victim is advised to call any of the phone numbers at the signature section of this joint statement.

On the other hand, we condemn in totality the militarization of the all-important Election by the Muhammadu Buhari led Federal Government of Nigeria. The threat to popularity and safety of the Poll have recently been compounded by the announcement of the Buhari Administration to flood Anambra State with battalions of armed security operatives; supported with military tanks, arms and ammunitions. The massive security deployment is also an indirect confirmation of earlier security information received by our leaderships alleging that “Federal Government has special interest in Anambra Governorship Poll and wants to capture the State at all costs”.

Although, it is alleged in some informed quarters that these figures are usually inflated by security authorities for illicit monetary gains or criminal enrichment, but they remain official figures available in the official government records. That is to further say that with only 4,608 polling booths in Anambra State, it statistically means 11 armed security personnel are allocated for each of the 4,608 polling booth in the State. This is the highest militarized election in the history of civilian-civilian democratic poll in any part of the world.


Militarization of democratic polls is one of the greatest threats to poll popularity, safety and credibility in modern democratic dispensation or electoral process.  It is also a truism that modern concept of election rigging is rooted in poll militarization which creates poll insecurity by threatening and scaring away voters from polling booths. The theory of anti election rigging grandly holds that the larger the voters’ turnout, the slimmer the chances to rig, but the lower the voters’ turnout, the bigger the chances to rig.

It is also grandly found that living votes are very difficult to rig or manipulate, unlike dead or fake votes that are very easy to manipulate. Through dead votes, an unpopular candidate can easily emerge and be declared winner. That is to say the larger the voters’ turnout the brighter the chances of emergence of the people’s choice and the lower the voters’ turnout the bigger the chances of emergence of an unpopular candidate/oligarchic gubernatorial puppet as next Anambra Governor or the return of incumbent oligarchic puppet.

The totality of the foregoing is that neither IPOB’s threat of ‘vote and die’ nor Buhari’s militarization of Anambra Poll means well for the entire citizens and residents of the State especially its 2.15m registered voters. The two ill-fated actions are therefore very regrettable and condemnable. The IPOB’s threats of violence against its own homeland population are contained in the Punch Newspaper of Saturday, 11th November 2017. It is found here: http://punchng.com/vote-and-die-ipob-threatens-anambra-residents/

While there is nothing legally wrong for a group to choose to boycott election or appeal on its supporters to do same using nonviolence or threats of violence, we are deeply concerned and worried over the resort to threats of violence to scare legitimate Anambra voters, in their entirety or total numbers, away from exercising their inalienable rights to vote or choose their leaders democratically.

Such violent threats like vote and risk being killed by poisoned thumb ink, stay away from polling booths in Anambra and avoid being by killed or fallen victim of Nigerian Army and Niger Delta Avengers bloody clash and vote and die in the November 18 Anambra Election, etc; clearly undermine the foundations of law of natural justice and nonviolence self determination. It is also a collective punishment of an innocent population that massively, willingly and conscientiously hearkened to IPOB’s historic sit-at-home call of 30th May 2017. Prior to the famous ghost street protest call, the same population was never threatened with “go out of your house and die”; yet the compliance was massive and second of its kind after MASSOB’s of 2004.

Dangers Of Election Stoppage
Stopping people from participating in electoral process or choosing their leaders especially through intimidation and threats of violence is universally abominable. In the UN Covenant on Civil & Political Rights of 1976, the African Charter on Human & People’s Rights of 1981 and Chapter Four of Nigeria’s 1999 Constitution (which predates the 1999 Constitution); rights to vote or be voted for are not only sacrosanct, but also strikingly justiciable. There is no difference between those who seek to stop people from voting or choosing their leaders democratically, using threats of violence; and exponents of military incursion in politics or sworn enemies of electoral process.

Stopping election or people from choosing their leaders democratically especially in a staggered governorship poll such as that of Anambra State has a double-edged implication and far reaching consequences. This is because stoppers of election today can be victims of stopped election of tomorrow; be it staggered governorship poll, local government poll, general poll or referendum or plebiscite.  It is so sad that the same Anambra State and its People that spent three years in court to get back their stolen mandate and spent several months further to make history as the pioneer and only introducer of staggered election calendar in Nigeria; are being intimidated and threatened with violence to stay away from participating in the same electoral process they fought hard to introduce into Nigeria’s electoral calendar.

It must be stated empirically that holding election especially the staggered governorship or local government election in a sub national entity such as Anambra State has nothing whatever to do with or common with “civil disobedience”, or “gathering of international momentum for Biafran referendum”, or “automatic UN sponsored referendum for Biafra”. Ballot box is so sacred that its sanctity can never be toyed with under any circumstance or for whatever reason. In the words of Abraham Lincoln: ballot box is much stronger than gun bullets. Any argument geared towards stopping a voting population from electing their leaders democratically is totally dead on arrival. It is also alien to the UN culture and world’s civil doctrines.

The sanctity of ballot box also transcends all social boundaries including nonviolent self determination and statehood which, in turn, is founded on universal adult suffrage. In other words, referendum or plebiscite itself is an electoral process.  It is a truism that no referendum can be popularly achieved without homeland Igbo population and its elite and attentive or enlightened sub populations. In the event of any referendum, if sanctioned by UN and sitting Government of Nigeria, the homeland Igbo population holds the key; which is why care must be taken in other not to self-endanger or provoke such mother population.

In the aristocratic and oracular Igbo Society, when an oracle chief priest encountered an incurable ailment or mysterious spiritual disturbance afflicting his patient, he immediately embarked on “mbia dibia” or a journey to wilderness or land of the spirits so as to consult and research properly for the purpose of finding a curable solution. In Igbo Land too, there are markets where questions, thoughts and ideas are traded and exchanged.

Consequently, we call on the Buhari Administration to neutralize its ongoing mass deployment of battalions of armed security personnel and military tanks to Anambra State. The Federal Government of Nigeria should civilianize its election security in the State and tailor same in scientificity or forensic securitization. The IPOB leadership is also called upon to desist from further threats of violence against Anambra voting population and restrict its appeal for “election boycott” to voluntary appeal or a total change of mind.  The group must also avoid being privy to the emergence of “a criminal governor-elect” as Anambra’s next Governor.

What Other Electoral Stakeholders In Anambra State Must Do
Owing to substantial proximity of polling booths to residents in urban cities and streets and rural dwellers, security agencies and voters will have no much problems locating and voting at the polling booths and securing them including the collation centers. Security operatives on election duties should be tutored on the need to be friendly and humane to members of the public especially those with their voters’ cards. Once a member of the public bears a voter’s card, he or she should be immune from further security questioning and assisted in locating the direction of his or her polling booth.

All security agents on election duty in the State must be properly tagged with conspicuously displayed and worn names and code numbers. This is to avoid overzealous and criminal politicians who, if allowed, can fake and dress their thugs and other violent persons with fake military and other security camouflages to pose as “security agents”.

Also, no security operative or agent should be allowed to check vehicle papers on Election Day in Anambra State and INEC must ensure that each of the 4,608 polling booths in the State is supplied with three functional and fully charged card readers so as to speed off the voting process and decongest the polling booths.

All political and government contractors and prominent rich persons and key government appointees and  key/violent market leaders in the State must have their security guards drastically trimmed down and denied any form of access to Anambra State Joint Security Taskforce (JKF) until days after the election. This is to stop them from forcing or intimidating villagers and other vulnerable citizens to vote against their will or candidates of their choice. Selling or distribution of foods and drinks and sharing of cash should be banned in and around all the polling booths and be holistically monitored. These can be done manually and electronically using security operatives and security cameras and non State actors.

For: Southeast Based Coalition of Human Rights Organizations (SBCHROs)

Prince Chukwuemeka Onyeso (+2348187194207)
For: Forum for Promotion of National Ethos & Values (FPNEV)
Posted by PublicInformationProjects at 08:29