Article: Paralyzed By The Internal Contradictions Of Change: The Ongoing Fuel Supply Crisis As A Metaphor 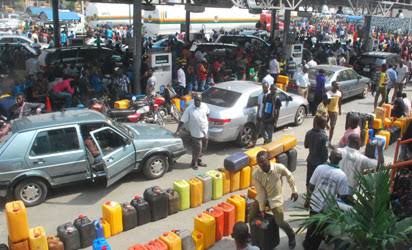 Nothing better demonstrates the collective nature of the decline in quality and gross failure of the collective leadership of Nigeria’s ruling class, than the current fuel crisis with the grand return of fuel queues, occasioned by fuel scarcity, itself driven by disruptions in fuel supply chain.


Let us be very clear about it, this crisis is as old as the fourth Republic, that is to say it is a crisis that has remained perennial and unresolved since the 1999 return to civil rule.

Since 1999, every government have been faced with this crisis, and every government have been unable to resolve it, just as each government, regardless of party coloration have deliberately wrongly attributed the cause of the crisis to a faceless cabal, which because it is composed of high profile elements of the ruling class directly linked to, protected by and sponsored by political office holders and their high ranking public service collaborators, has remained more powerful than successive governments.

This anomalous situation can only exist and subsist because there are elements within the ruling class who deploy the instruments of state power to protect this faceless cabal.

In this context if some failed and or failing states can be described as Narco states [because they have been captured by the drug barons], then it may be safe to describe the Nigerian state in recent decades as a Crude State on account of its being captured by oil thieves and economically destructive cabals which dominate the petroleum products supply and marketing stream.

But what is the reason for this perennial crisis in fuel supply? The causes have been well known for decades, and consequently the solutions have been available for decades as well.

The biggest factor, the single most significant factor is because paradoxically even though we are one of the major oil and gas producing nations of the world, we are almost entirely [more than 90% on the average] dependent on import of refined petroleum products to meet domestic need for refined products.

But this just another manifestation of our crisis, where we are primary raw materials producing and exporting country, and are saddled with an incompetent and docile elite, that is satisfied with collecting rent from the extractive industry and earning revenue from export of raw materials, rather than invest in value addition processes that can enable us to convert our immense natural resources and primary produce potential into the bases for industrialisation and manufacturing.

The second most significant factor is the fact that our currency is floated against major international currencies and hence the fluctuation in the value of our currency.

And unless we address these two factors, the dynamics of which we have no control over, we shall remain stuck in this cycle of crisis.

The solution, which has been around for decades lies in investing in policies and resources that can enable us to achieve self-sufficiency in domestic refining capacity, while also tackling the bottlenecks with the logistics of distribution.

How might this be done? We need to resolve the riddle of why we have spent so much money on the Turn Around Maintenances [TAMs] of the four existing refineries without being able to improve capacity utilisation beyond 20% since 1999.

Every regime since the Obasanjo regime has spent Tens, if not Hundreds of Billions of Naira on these TAMs since 1999, without achieving any result. What is the problem? People and corporations get awarded these TAM contracts, they get paid, but they end up doing nothing or end up doing very shoddy jobs. And yet instead of treating these people as criminals and economic saboteurs that they are, we pamper them, give them loving pats on their backs and award new rounds of TAMs to them! Governments and regimes that allow this to happen, then turn around to lay the blame the problem on a faceless anonymous cabal, which is apparently more powerful than the government, because it enjoys the full protection of the institutions of the state?

Any serious regime, particularly one that proclaims itself a ‘’Change Regime’’, and one that insists that its core tenet is that of Transparency and accountability, ought to be able to tackle this so-called cabal and bring the full weight of the state down upon the heads of the cabal.

Secondly, we could pursue other options, and the more than two years that this regime has spent in office is more than enough, to have pursued and gained traction on those other options.

We can pursue the option of creating the enabling environment for private sector investment in refining business. We could have entered into a binding agreement with a consortium of private sector businesses, and offered them some incentives to enable them to build a number of medium scale refineries, depots, and distribution infrastructures across the country.

The kind of arrangement that created enabling environment for Dangote refineries, a large-scale project, could have been entered into with a number of consortia to embark on medium scale projects across the country.

Finally, we could have also undertaken a process to modernise artisanal community refineries in the Niger Delta and convert them into modern, less environmentally damaging small-scale cottage refineries.

We could have set aside public funds to utilise as counterpart investments in these ventures. And in doing these, we could have ensured that our Trade, Investment, Infrastructural, monetary and fiscal policies among others are aligned to enabling the achievement of these goals.

But what do we have right now? A state of governance paralysis considerably enhanced by the contradictory and sometimes mutually antagonistic character and nature of existing policies; and further compounded by the antagonistic nature of the internal contradictions within the Change government and agenda.

So yes, these problems are manmade, they were not spiritually induced, and they can only be solved by human agency.

The real challenge however is that the ruling elite is complicit in the creation and nurture of the problem, and is therefore resistant to transforming the situation.

All the progressive, pro-people and anti-exploitation social forces need to come together to resist this deliberate policy of continuation of our suffering while they smile to the banks on account of our misfortune.

We must stand firm and say Enough Is Enough. It is high time that the Labour Movement and the Pro-people Civil Society should come together once again and Demand an immediate end to this contrived and foretold crisis. We must be prepared to organise Mass Nationwide Protests to put an end to this menace, to compel the regime of change which has been short-changing us to take on the cabal and do the needful.

But more importantly, 2018 is the year we prepare for the 2019 general elections; therefore, it is also the year when we take concrete steps towards ensuring that we have leaders who are not only aware of our problems, but who understand the problems, understand the nature of the solutions required, and are determined and prepared to take on the challenges, and through their faith and reliance on our collective support and interest, are able to take the needed steps to overcome the problems.

So whereas the short-term solution lies in organising and mobilising immediate resistance to this situation, the medium term solution lies in ensuring that all of us of voting age become politically active; get registered to vote; and come out to vote enmass in the 2019 elections.

And in becoming politically active and exercising our civic duty, we must consciously interrogate the political actors, consciously play a role in defining the agenda, and consciously promote a course of action that can lead to the emergence and election of an alternative, radically different, transformative and inspirational leadership.
Posted by PublicInformationProjects at 11:40