News Release: "If The President Cannot Keep Our Country Safe, Then He Automatically Loses The Trust Of The Citizens"----Nigeria Catholic Bishops 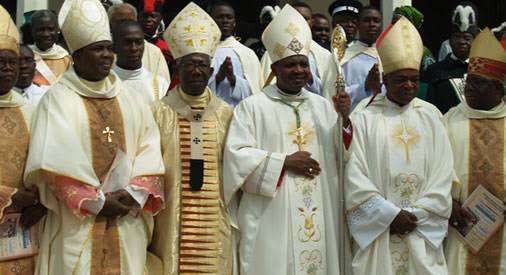 We have received with deep shock, sorrow and utter horror, the gruesome, grisly and dastardly murder of two Catholic priests along with fifteen of their parishioners in the early hours of the morning of Tuesday 24 April 2018. These innocent souls met their untimely death in the hands of a wicked and inhuman gang of the rampaging and murderous terrorists, who have turned the vast lands of the Middle belt and other parts of Nigeria into a massive graveyard. Their unrestrained mayhem has become a metaphor for the untimely death that is now the fate of many of our fellow citizens today.

That our two priests, Fr Joseph Gor and Fr Felix Tyolaha, along with their parishioners were waylaid in the course of the celebration of the Holy Mass early in the morning, suggests very clearly that their murder was carefully planned. This wicked act cannot be said to be a revenge attack (as is often claimed), for whom have these priests attacked? Indeed we have just discovered that on January 3 this year, Fr Gor tweeted: "We are living in fear. The Fulanis are still around here in Mbalom (where they were killed). They refuse to go. They still go grazing around. No weapons to defend ourselves."

Their desperate cries for security and help went unheeded by those who should have heard them. They could have fled, but, true to their vocation, they remained to continue to serve their people right unto death.

We are sad. We are angry. We feel totally exposed and most vulnerable. Faced with these dark clouds of fear and anxiety, our people are daily being told by some to defend themselves. But defend themselves with what? The Federal Government, whose primary responsibility it is to protect lives, for its part alleges that those who ask the people to defend themselves are inciting them to take the laws into their hands. But how can the Federal Government stand back while its security agencies deliberately turn a blind eye to the cries and wails of helpless and armless citizens who remain sitting ducks in their homes, farms, highway and now, even in their sacred places of worship?

For over two years now, the Catholic Bishops' Conference, along with many other well-meaning Nigerians, has consistently asked the President to rethink the configuration of his security apparatus and strategy. Along with millions of Nigerians, we have expressed our lack of confidence in the security agencies, which the President has deliberately placed in the hands of the adherents of only one religion.

On February 8 this year, when we paid the President a courtesy call, we raised alarm over the security of the Nation and the spate of violence perpetrated with impunity by people who have neither respect for the value of human life nor regard for the laws of our country, urging him to take the most drastic steps to stem the tide of this evil in our land. Since then, the bloodletting and the destruction of homes as well as farmlands have increased in intensity and brutality. Now our Churches have been desecrated and our people murdered on their altars. As leaders, we have consistently asked our people to remain peaceful and law-abiding, even in the face of the worst form of provocation. Today, we Christians feel violated and betrayed in a nation that we have all continued to sacrifice and pray for. We collectively feel abandoned and betrayed.

We, the Catholic Bishops of Nigeria, are currently in Rome on official visit to the Holy Father and other agencies of administration of the Church, as it is customary. Naturally, this matter will come up. We are at a loss as to what excuse again we can continue to give about why things are the way they are in our nation, where a nation's landscape is littered with the bodies of its own citizens. We are sad and fear that the clock is ticking. The bomb must be defused quickly before it explodes.

Since the President who appointed the Heads of the nation's Security Agencies has refused to call them to order, even in the face of the chaos and barbarity into which our country has been plunged, we are left with no choice but to conclude that they are acting a script that he approves of.

If the President cannot keep our country safe, then he automatically loses the trust of the citizens. He should no longer continue to preside over the killing fields and mass graveyard that our country has become. Repeated calls from us and many other Nigerians on the President to take very drastic and urgent steps to reverse this ugly tragedy that threatens the foundation of our collective existence and unity as a nation, have fallen on deaf ears. It is clear to the nation that he has failed in his primary duty of protecting the lives of the Nigerian citizens. Whether this failure is due to inability to perform or lack of political will, it is time for him to choose the part of honour and consider stepping aside to save the nation from total collapse.

We call on all Nigerians to hold their heads high and stand for their fundamental right to life and security. Government should encourage and empower citizens to secure themselves and their environments. This is not the time to disarm people with legally procured weapons of self-defense. These are not normal times since those we pay to protect us have failed to do their duty. Nigeria can return to normal times if we put our heads together with sincerity.

May God grant eternal rest to the victims of these heinous crimes, console their families and may he restore peace to our country.