Article: Nigeria And The Malthusian Misery 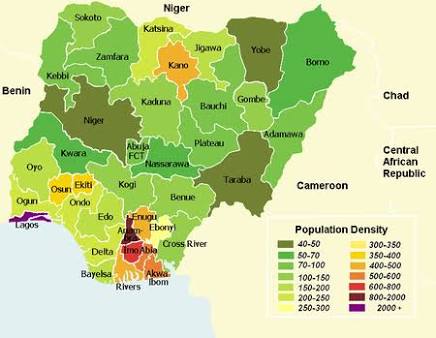 In the early hours of Friday, 23th March, 2018, I ignored the dangers of the unhappy, hot and poisonous black soot-filled low clouds over Port Harcourt and its environs and travelled again, on the popular East- West Road.


I was travelling to Warri, one of the cities of Delta State (Western Niger Delta). I had arrived at the University of Port Harcourt (UNIPORT) stretch of the broken road few minutes after 8.00am. Feeling a bit hungry (I didn’t have my breakfast before I left my house), I pleaded with my co-traveller (the driver) to park his car somewhere there so that I could get some snacks and soft drinks. He was able to find a small space - few metres away from the cement block fence wall of the Delta, one of the campuses of the federal government – owned University of Port Harcourt.

The place was overcrowded with cars, humans, goods and smelling dustbins heaps. We really struggled to find that space. It over-looked Kirimanjero, a fast food restaurant on my left hand side of the road. The Delta campus section also over-looked the East-West Road had been converted into a noisy commercial motor park, market and refuse dumpsites. I don’t know whose handiwork was it, but the whole area was quite unpleasant of a university environment.
I was about to walk to where Kilimanjaro was located when I saw two children moving slowly  on the mountains of the foul-smelling  refuse dumps,  picking visibly  empty bottles of water and coca cola, and  turning the substance therein  into their mouths. I stood for few seconds in thoughtful frame, to observe them, and later moved closer to them. The starving children were not bothered by my huge presence, but continued feeding on the rotten food remains. As I hissed loudly as a way of drawing their attention to myself, one of the drivers waiting for his car to fill up with passengers at the motor park, shouted rhetorically, in his coarse Pidgin English, “Sir, dose boys dem be human beings?” My early morning hunger had disappeared. I was a bit angry at the man, because I understood what he meant. He expressed the typical stereotype and prejudice most Nigerians throw at each other which deepen their division.  I wasn’t bothered by that either.

I moved closer to them and asked them to stop picking those rotten items and promised to buy them some foods. They stopped doing that immediately, and were smiling- a sign that they were happy (at my offer). I held back my tears while discussing with them. And later, took them to a bread seller, a beautiful middle-aged and short woman, her   stand was located not up to four metres  to one of the  dirty dumpsites. The woman had seen the children picking rotten food items around and ate them. As she saw the children and me, her face darkened like that of a sudden bad weather announcing the coming of a violent rainstorm. She was extremely hostile to us. I understood her state of mind - same stereotype and prejudice like that of the commercial driver – that those poor kids/victims are wizards and devils. I left her bread shop unhappy, because I didn’t want to be physically attacked by an angry woman who may think doing that was  fighting the “devils” (the scavenging children) and its “grand master” (which was myself).

I walked away slowly in my unhappily mood with the kids who were feeling unhappy too, to the next bread seller’s wooden table operated by a fairly tall, but slim  woman, in her mid-50s. She knew the kids too. My driver knew the woman fairly well, because they are from the same area in one of the states of the south-south geopolitical region of Nigeria. The woman called each of them by the names of their states rather than their real names which she knew- a way of mocking them and their states. The older one is from one of the states of the north – central states (middle belt) and the other from a state in south-south region. “Madam, dat  na their states names ?, I asked, “ Please, I beg,  call them by their names nor be states”.

She didn’t respond to my plea immediately, rather she asked me to wait, as  she as jumped like an manic Agaba masquerade to the other side of her oversized, crumbling wooden table  and brought out a big loaf of bread as big as a  casket, a  family of six couldn’t finish it in two days. She also brought a big plastic coca cola and middle-size of eva water (same coca cola product). I paid for them and left her with a change of N200. “ Tank you, pastor”, she said in her mischief  loaded smile.

I handed over the items bought from the woman to the poor street children and also gave each of them N500 cash. As I was about to quit the scene and the children, they had started chanting “God bless you”. As my mood swung  to the positive one,  the woman, who sold bread, water and coca cola to us,  struck, “Dis children dem be witch oo” clapping her both hands in the air, and laughing loudly.  “Pastor (referring to me) sees their papa there”, she pointed one of her hands in the direction of one old, short and   homeless man, sitting quietly beside one of the refuse dumps. The man doesn’t look like a mad man; perhaps, he was infected with some other old age related illnesses. The man wasn’t in any way related to the poor street children. The sharp-tongued woman was just said that to mock them.

The older one from one of the Middle Belt states was 10-year-old. He was the six the child of his mother (his mother had 8 of them). He couldn’t say whether his mother was still alive or not, although he was quite sure that his polygamous (polygamy) father was alive. He came to Port Harcourt with one of his village men (an auto mechanic) when he was eight –year- old as a domestic worker (house help). Back in his village, he was in primary four. His employer (village man) promised to send him to school as payment for his services to his family. The man never fulfilled his promise to the poor boy; sadly, his wife and one of the man’s younger brothers allegedly on daily basis abused and battered him. He had to escape to one of the commercial motor parks in the Diobu area, western part of Port Harcourt, and spent some months roving on the volatile streets.

It was during one of his “adventures” around the UNIPORT environs, located on the “far away” north-western axis of Port Harcourt that he met his new friend, some five months before. They had remained together since then.

His new friend, who was younger, was eight-year-old years. He came to Port Harcourt when he was seven-year-old with three of his older male friends to look for non-existent menial jobs. He doesn’t know the whereabouts of any of his friends. According to his story, he was the last child of his father (his father had five children with his mother). His father reportedly died when he was two years old, but later his mother had other four children with two other men (his “step fathers”?).

I spent over thirty eight minutes with the hungry and angry children. I left them overwhelmed with deep sadness and thought throughout my trip to Warri. Nevertheless, I managed to write some notes (which later made part of this article) and a poem, “The Forgotten Children”. This poem shall appear in my second collection of poems, “Witness to my Disabled Tears”.

The forgotten children whether male or female litter the edges of our broken roads, volatile streets, motor parks, refuse heaps, shanties and cities of Nigeria. The tragedy of the forgotten children is not entirely a Port Harcourt or Rivers State spectacle. It is a Nigeria nightmare. While their mates are attending good schools either in Nigeria or abroad and wallowing in affluence and luxury, they are always hungry, sick and struggling for rotten food remains on garbage loads daily. No one cares for them; rather they are always stigmatized as  “satans”” devils’  “witches” “wizards”, “criminals” and killed – “The Forgotten Children!”.

Tension and anxiety hovers at low attitude like the deadly black shot of Port Harcourt. The population of Nigeria is growing at an alarming rate. The oil-driven Nigeria economy is in a steady decline (riddled by crippling   debts, corruption, falling prices of oil etc) with an explosion in population growth. The country faces a huge risk of epidemics of violence, crimes, prostitution, migration mess, hatred for one another triggered by this brazen acrimonious struggle over dwindling resources, desperation, extremism, human trafficking, pollution, further destruction of our environment and ecosystem, child’s labour and abuse. Nobody should deceive anybody that anything would get better again. It won’t.  It is also a global problem.

Former Shehu  Shagari’s (of second republic-1979-83) Transport Minister and Head of his Presidential Taskforce on Rice, the Nassarawa  State-born Alhaji Umaru Abdulrahman  had once  bragged, “ We will leave no stone unturned to ensure that there is sufficient food in Nigeria, and nobody will eat from the dustbin”. Nigerians are openly eating from the dirty, eye-catching dustbins around UNIPORT and other places around the country.

How will Nigeria feed its over 200 million peoples? Our farmlands are becoming infertile. Due to this, we have resorted to inorganic farming (chemical farming) with its grave health impacts of its consumers. It is not compulsory that everybody must have a family or children. We must change our perception, bad cultures and lifestyles. Those who don’t have families or children shouldn’t be mocked, and is unnecessary to be desperate about having one. In our society, some families that have many children never planned to do so- some people feel that female children are not children or vice versa. It is only a backward society and people who promote these outdated and savage cultures.

The principal purpose of reproduction is for the continuity of the human spies, not that one will   keep one’s name or wealth and so on as we always claim. Majority of those who have children or families have no business with that. Majority of children from either married and unmarried parents were never planned for. If one must have a family in present day Nigeria, one does not need more than one or two children. Families come with a huge responsibility and stress. Who takes care of those children of lower-class parents near Delta campus of UNIPORT fence? We must set aside our greed, brainwashing and so-called cultures which promote irresponsibility, and confront the reality of our current situation.

The Nigeria government should set aside its hypocrisy about population control. The time to act is now. It should legalize abortion and pursue aggressive family planning and population control through campaigns, education and policies. We have a large population of unproductive people. The Malthusian retribution swings. We shouldn’t allow it to strike.