Communiqué: Communiqués Issued At The End Of The 4th Anniversary Celebrations Of The Alaigbo Development Foundation (ADF) 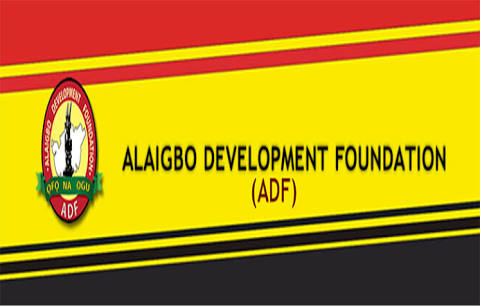 The Alaigbo Development Foundation (ADF) celebrated her 4th year anniversary in a ceremony which brought together several Igbo leaders and activists, both at home and in the Igbo Diaspora. The event took place at the Base Events Centre, Enugu. It was indeed an occasion to celebrate four years of dedicated service to the Rebirth and Rebuilding of Alaigbo in various facets of its social existence.

The leadership presented reports on the mission and activities of the Foundation through the President of ADF, Prof Uzodinma Nwala; a detailed exposition of the profile of the organization by the Secretary of the organization, Prof Nath Aniekwu as well as an account of the philosophy and thrust of ADF’s developmental program popularly referred to as Akuruo Ulo (Invest-At-Home) which was presented by Mazi Sam Ohuabunwa OFR, the Chairman of ADF Committee on Investment and Development.


The Chairman of the occasion, His Excellency, Commodore Ebitu Ukiwe, congratulated the leadership and membership of ADF on the occasion. He expressed delight over the enormous achievements of ADF within such a small space of time. He called on the people to give ADF all necessary support in the drive to get Alaigbo overcome the horrors of the war by applying the creative talents of industry, collective spirit and hard-work for which the Igbos are known world-wide. He called on the various leadership institutions in Alaigbo – the State Governors, Ohanaeze Ndigbo, the traditional, religious and educational institutions and other pan-Igbo organizations to work in harmony with ADF for the development of Alaigbo.

Finally, Commodore Ukiwe stressed on the need for Ndigbo to develop strategic relationship with their neighbors in the Federal Republic of Nigeria.

In her own speech, Her Royal Majesty, Dr. Martha Dunkwu, the Omu of Anioma expressed support for the developmental movement of Akuruo Ulo initiated by ADF in order to advance the economic and social transformation of Alaigbo. She called for the liberation of Igbo women from the shackles of tradition that may hinder the society from ripping the benefits of the creative energy of the women. She called for respect and preservation of those different but complementary positive roles which tradition has assigned to both the man and the woman, to ensure healthy development of the family and the society.

Other speakers included His Excellency, Amb. Austin Okwu, former Ambassador of Nigeria and of Biafra, and Bar Autin Okwu, both of whom flew from Connecticut USA and South Africa respectively to attend the 4th Anniversary of ADF.

The Memorandum of the Alaigbo Development Foundation (ADF) on the Future of Alaigbo and the Future of the Federal Republic of Nigeria (otherwise referred to as “The Green Book”) was presented by Prof. Uzodinma Nwala, President of ADF.

At the end of the two-day event, the following resolutions were made:-
The Memorandum of Alaigbo Developmemt Foundation on the Future of Alaigbo and the Future of the Federal Republic of Nigeria, otherwise referred to as “The Green Book” was endorsed by the participants as a document which expresses the deepest yearnings of Ndigbo and, therefore, a crucial testament of the vision for the future of Ndigbo.
Specifically, the participants endorsed the demand for Alaigbo as an Autonomous Region and Nigeria, as Union of Autonomous Regions.
The participants affirmed that rather than remain as a slave in the Federal Republic of Nigeria, Ndigbo shall assert their political independence and freedom,

Reject the 1999 Constitutional of the Federal Republic of Nigeria as a basis for any so-called restructuring because it was imposed by the military and does not derive from the will of the people,

The prevailing anarchy in the Federation and the killings in various parts of Nigeria by the armed terrorist Fulani Herdsmen and the Boko Harm were stoutly condemned as brutal ethnic and religious cleansing. The people were urged to defend themselves in the face of the collusion by the Federal Government and the military under their control.
The participants noted that any supply of military equipment to Nigeria by any country is an endorsement of the on-going ethnic and religious cleansing in the Federation.

Condemnation of the systematic undermining of the apparatus of the State and their seizure by one nationality, namely, the Fulani ethnic nationality as well as selective application of foreign aid, neglect of States in Alaigbo; all these accentuate the high rate of poverty and unemployment in the Region,.

Resolve to support the Anti-Open Grazing Bill which ADF has forwarded to all the State Governors and Speakers in Alaigbo and urge other states to follow the example of Ekiti and Benue States to not only pass the Anti-open Grazing Bill into law but also empower the people to defend their lives, their land and their property,

Commend all those who have had the courage and good conscience to condemn the ethnic cleansing going on in the country under President Buhari’s regime.

Express deep appreciation to all those who participated in the burial of General Achuzia including the Governments in Alaigbo, the Palace of Asagba of Asaba,  Ohanaeze Ndigbo, Asaba Develpment Union and other pan-Igbo organizations, and condemn attempts made to prevent pro-Biafra organizations with whom General Achuzia had fraternized with while alive. Above all, they expressed satisfaction that General Achuzia, in life and death, was a great symbol and instrument in unifying the Eastern and Western segments of Alaigbo.

The Alaigbo Development Foundation (ADF) calls on all Umuigbo and their friends to endeavor to obtain copy of the Video Documentary on the Lives and Times of General Achuzia which was sponsored by the ADF,
Send Condolences to the people of the Middle-Belt whose territory have been the most hit by the ethnic and religious cleansing by the Fulani. Call on Ndigbo to render whatever moral and material support possible to the affected peoples of the Migle-belt. Urge Ndigbo and the people of the Middle-belt to forge a common front to defend themselves in accordance with the principles of Self-preservation which is the first fundamental law of nature.

Call on all peoples facing the genocidal war of annihilation by the Fulani herdsmen and their allied terrorist organization - the Boko Haram, to rise to defend themselves by working together for their collective survival.
Urge all Peoples in the Alaigbo, South-South, South-West, Middle-belt and Southern Kaduna including all Christian Communities to adopt the hallowed principles of Self-determination and Self-defense and insist on the return of the autonomy of the various regions artificially amalgamated by the British in 1914.

The participants support Prof. Nwabueze’s call for the de-proscription and declaration of IPOB as a terror organization, withdraw all court charges against the leaders of IPOB, Mr Nnamdi Kanu, release their members in detention in various prisons in Nigeria, and that Government should negotiate with IPOB as the Federal Government is doing with Boko Haram members, even though they are the 4th most dangers terrorist organization in the world.

The participants hereby urge Ndigbo to harken to the Aku Ruo Ulo movement initiated by ADF . Ndigbo should think home, invest home. In Igbo philosophy, no wealth is wealth unless when its presence and effects are felt at home. Ndigbo should not concentrate in developing places where they will be despised and maligned at the expense of their home.

The participants urge the Governments in Alaigbo to create the necessary environment for both local and foreign investment in the region, to forge alliances and forces that will ensure Alaigbo is developed despite official policy meant to cripple the economy and social order of Alaigbo.

The participants ate of the view that the so-called 2019 election is already rigged in view of the massive recruitment and registration of foreigners and under-age children, seizure of the Nigerian armed forces that are simply there to do the bidding of those who hold the reigns of power in country.

Finally he participants condemn as evil the penchant by any governor in Alaigbo to turn the political and material resources of their state as family property and elevate corruption as the instrument of governance. They call on the people to be courageous enough to reject such unholy exercise of political power.