News Release: Processions Against Killing Of Christians In Nigeria: What Is Wrong With Anambra Catholic Bishops? 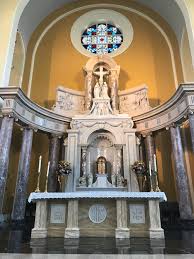 The yesterday’s anti Christian killings’ sacred processions across the country by members of the Laity and the Clergy of the Catholic Church in Nigeria is a strong message to the Buhari Government and its grossly lopsided security forces that wanton killings in the name of Islam in Nigeria leading to killing of over 9,000 Christians and destruction of no fewer than 700 churches since mid 2015 can no longer be tolerated or condoned.

No fewer than 1,260 Christians have been killed and dozens of churches burnt or destroyed in the past six months by Jihadist Fulani Herdsmen across Nigeria; all in the name of Islam. The killings included the recent massacre of 19 Catholic faithful-two Catholic Rev Fathers and 17 others in Mbalom, Benue State. The slain were interred same yesterday during which Vice President Yemi Osinbajo was reported to have shaded crocodile tears.

The killings and destruction of Christian sacred places of worship; taken place in the months gone be, specifically took place from beginning of December 2017 to 20th May 2018. The Catholic and other Christians’ national processions are also a strong message to the same central Government that all forms of killings outside the law in Nigeria involving both state actor and non state actor killing of innocent and defenseless citizens irrespective of their faith or tribe must be checkmated and tamed.

We at Intersociety gladly welcome and commend the sacred processions and similar recent ones by the leadership of CAN. These sacred processions are in line with our recent calls on Christian leaders to strongly and courageously wake up in defense of endangered Christian faith in Nigeria and use all available legal and nonviolent means and measures to force the Buhari Government to stop such butcheries.
It is recalled that our Organization (Intersociety) had on 29th April 2018 specifically written an open letter to Nigerian Christian leaders urging them to rise in strong defense of Christian Faith in the country, etc. Hard copies of the letter were on 2nd May 2018 sent and successfully delivered at the secretariats of CAN and CBCN in Abuja.

The effort of the Government of Benue State by consistently crying out, taking record of the victims and their conflict environments as well as facilitating other interventions including provision of IDP camps and relief materials for the survivors and befitting interment and designation and preservation of monument sites for the slain are very commendable. Beyond these, the Government of Benue State should also explore international justice dimensions and campaigns into the killings.
The Benue Governor’s disclosure that no fewer than 492 Benue Christians have been killed by Jihadist Fulani Herdsmen since January 2018 is a confirmation of woeful failure of the Nigeria Police Force which ought to be in the know and possession of such official statistics but failed to do same owing to its individual and corporate soft spot for the atrocity perpetrators or the masterminds of the butchery.

However, we are totally shocked and disappointed at zero participation of members of the Clergy and the Laity of the Catholic Archdiocese of Onitsha and the Dioceses of Awka and Nnewi in the sacred processions. The Onitsha Catholic Archdiocese has a status of an Ecclesiastical Province and the oldest place where the Church started in Igbo Land in late 19th and early 20th Centuries; yet it has led other two dioceses of Awka and Nnewi into silence of the graveyard and inaction in the ongoing anti Christian butcheries in Nigeria. The Archdiocese is also the headquarters of Catholic Church in Igbo Land and parades one of, if not the largest Catholic population in Nigeria.

We carefully followed or monitored the sacred national processions of yesterday (22nd May 2018) from all over Nigeria; likewise recent ones by CAN and found the Anambra Catholic population and their three Bishops conspicuously missing from such divinity sanctioned sacred street expressions. Media reports this morning also attest to this. We spent much of yesterday afternoon and early evening calling all our media friends and Catholic parishioners who are very close to the Clergy and the feedbacks we got across Anambra State were roundly disappointing.
Our field reports corroborated by independent media reports clearly indicated that with the exception of skeletal and scanty parish processions in Ekwulobia, Adazi, Alor and somewhere at Fegge Housing Estate, the rest of the State had the all important processions collapsed. It further appeared from our field observations and call interviews that the authorities of the three Catholic Dioceses of Onitsha, Awka and Nnewi showed little or no keen interest in the sacred processions leading to collapse or flop of same.

The lukewarm attitude and inaction of the Catholic Church and its three Bishops in Anambra State leading to total failure or collapse of the said national processions across the State are surprising and shocking. We boldly ask as follows: What is wrong with Catholic Bishops in Anambra State?  Where, specifically,  were His Grace, Most Rev Val Mmaduka Okeke (Archbishop of Onitsha) and Their Lordships, Bishop Paulinus Ezeokafor (of Awka Diocese) and Hilary Okeke (of Nnewi Diocese) during the sacred processions? Were they still in Vatican City with the Holy Father or in their respective Bishops’ Courts (Houses) during the sacred processions?

We are deeply worried over such un-catholic disposition of the present Anambra Catholic Bishops. This is more so when the Church had in recent years been in the vanguard of championing democracy, good governance and human rights in Anambra State. It is still on records that it was the similar sacred processions by the Church in alliance with pro democracy groups and activists in early 2000s in Anambra State that ended political brigandage, anarchy and massive poll rigging and enthroned voter sanity and good governance in the State which began to manifest fully in 2006 and above.