Article: The Tragic Consequences Of Failure 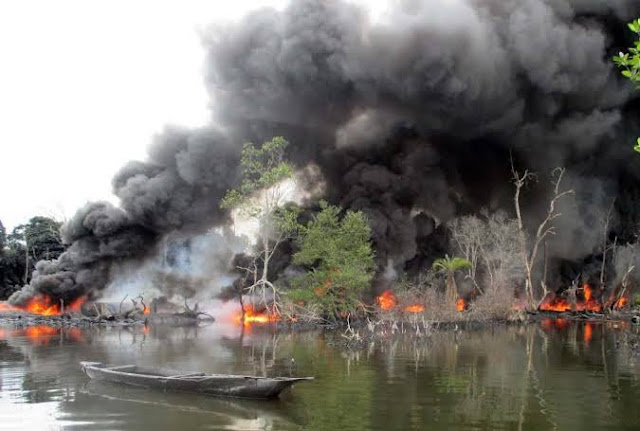 A number of incidents have been happening in the polity of recent, some of which have led me to a decision that this piece needs to and has to be written now.


The first scenario is around the deteriorating internal security situation and the consequent call for state police; the resurgence of the call for restructuring as an affirmation of the necessity for state policing; as well as the renewed stridency in the call for resource control, accompanied by the threat of armed return to the creeks.

The second scenario derives from my participation in a spate of recent stakeholder forums around recovery of looted funds and resource mismanagement and justice issues in the extractive [including solid minerals, oil and gas] sector of the economy.

The third scenario is a direct consequence of my recent rereading of the seminal work of the late Comrade Festus Iyayi [one of my political and ideological teachers], written for the Center for Democracy and Development [CDD] in 2007, under the title “The Niger Delta: Issues of Justice and Development Agenda”.

Even though I do not always agree with my teacher [Iyayi], and I do have certain differences of opinion and orientation with him with respect to our shared understanding and embracing of Marxism as a guide to understand reality and change it; I am nevertheless in full agreement with the analysis and the conclusions from that analysis of the Niger Delta situation and struggle encapsulated in the referenced book.

This piece, is in essence therefore, not only a reaffirmation of the conclusions that he drew, but also an examination of an unconscious gap in his presentation.

What was the core of his analysis? That the Niger Delta situation is one of underdevelopment. That underdevelopment is essentially the outcome of a situation where one entity appropriates and utilises the resources of another entity to achieve its own development, while simultaneously under developing the entity that is being exploited.

In any case, It was this political understanding and ideological orientation that drove my engagement and continues to drive my engagement with the Niger Delta situation and struggle.

Now, this assertion bears re-emphasising, not the least because it was correct in 2007 when it was proposed, but also because history [before and since 2007] has repeatedly shown that it is the most correct, and perhaps the only pathway to the successful transformation of the Niger Delta Condition.

So where lies the gap that I spoke of, a gap that is still missing, and a thorough examination of which can help us to learn the necessary and sorely required lessons for our struggle.

All through Iyayi’s analysis and account in the referenced book, when discussing the responses of the peoples of the Niger Delta to their situation and conditions, reference was made to many of the popular peoples organisations of the Niger Delta [NDVF, MOSIEND, MOSOP, IYC, and CHIKOKO Movement among others], as well as their strategic civil society partners [ERA, CLO, CDHR, CDD among others].

However, in all of these, although his orientation made him conclude on the essential necessity for a Pan Niger Delta strategic approach; and although he made reference to the CHIKOKO Movement; it was clear that the significance of that Movement was not apparent to him.

And as I have said earlier, this was not entirely his fault. He was operating within a context when the CHIKOKO intervention had already waned, and when the concerted effort to write it off the history of the Niger Delta struggle was in its ascendancy.

The CHIKOKO MOVEMENT was exactly in its origin, character and nature one bold attempt to develop and deploy the Pan Niger Delta Strategic approach.

The CHIKOKO MOVEMENT was publicly launched at Aleibiri in August of 1997. The process towards its formation began in real essence in 1996.
The drive towards its establishment drew from lessons learnt from the immediate and not so immediate past of the Niger Delta struggle.
Our analysis of the crushing of NDVF in 1967 and the repression visited on MOSOP in the early 1990s led us to the conclusion that the only strategy of resistance that could achieve success would be that of a United Front, that is a United Front of the Popular Organisations of Struggle of the Peoples of the Niger Delta, expressed in the Context of a Pan Niger Delta Movement.

The second set of conditions which brought urgency to our preparations was the context of Internecine wars between and among the communities and Ethnic Nationalities of the Niger Delta, fuelled by the Nigerian State and its Oil and GAS TNC partners.

We thus understood that we needed to build alliances with other popular social forces who were engaged in a struggle for survival with the Nigerian state and all the ruling class fractions cohering around it – National and International.

In the beginning, there were twelve of us in the coordinating leadership, driving the process. These twelve included persons, who were leaders drawn from across the Niger Delta, as well as those who were not indigenous to the Niger Delta, but were resident in the Niger Delta and had cast their lot with the people, conditions and struggles of the Niger Delta.

By the time of the public launch at Aleibiri in August of 1997, the circle of twelve had been reduced effectively to a circle of 9 [– our own, that is the NIGER DELTA VERSION OF ‘THE HISTORIC NINE’- drawing a parallel with the Algerian struggle for national liberation].

Nevertheless, these Nine were in contact with and engaged in the process of building a strategic relationship among and between the leaderships and popular organisations of the peoples of the Niger Delta.
A core mandate of the CHIKOKO MOVEMENT which we gave to ourselves included working with the popular organisations of the Ethnic Nationalities of the Niger Delta to build up their respective ‘National Liberation Movements’, articulate their demands in the manner in which MOSOP had articulated the demands of the Ogoni in the Ogoni Bill Of Rights; encourage coordinated and united action on the basis of their respective demands; and the eventual articulation of a Pan Niger Delta Declaration, through the agency of a Pan Niger Delta Conference [PNDC] which would harmoinse the positions of the different Niger Delta groups, and articulate a common Pan Niger Delta Declaration.

By the way, for the avoidance of doubt, the vision, goal, strategic orientation and demands of the CHIKOKO MOVEMENT were articulated in the MANIFESTO of The CHIKOKO MOVMENT Which was publicly launched at Aleibiri in August 1997.

Additionally, instructively the actual name of the movement we established and launched was CHIKOKO – The Pan Niger Delta Resistance Movement [PNDRM]. We gave it the sobriquet CHIKOKO in order to make it acceptable to the peoples of the Niger Delta, Çhikoko’ being the local name given to the swampy soil where mangroves thrived along the coast of the Niger Delta.

This sobriquet and local name was actually the product of the intellectual fecundity of a certain Godwin Frank, who was one of the Twelve, and one of the Historic Nine.

The first spokesperson and leader of the CHIKOKO Movement was the late Oronto Nantei Douglas. Isaac Osuoka, who we call Sankara, was the first General Secretary. At one point in its short live, the Late Kingsley Kpea an Ogoni was the General Secretary.

And how do I know all of these? Because I was there. I was one of the Twelve, and one of the Historic Nine; and I wrote in long hand, the first draft of the Manifesto of the CHIKOKO Movement.

After the launch we embarked on a wide ranging strategic consultation across the Niger Delta, as well as within Nigeria, outside the Niger Delta.
I can say without any equivocation today that arising from that effort were the revival of MOSOP and the Ogoni movement; The formation of Ijaw Youth Council [IYC] and the Kiaima Declaration of the Ijaw People; The Oron National Movement and the Oron Bill Of Rights; The Isoko Declaration; the revival of the Ikwerre Youth Convention and the Ikewerre Charter of Demands; The Aklaka Declaration of the Egi People; among numerous others.

We also sought to build Pan Nigerian alliances, and this led to the CHIKOKO Movement becoming an affiliate of the United Action for Democracy [UAD], fully integrating the Niger Delta struggle into the Pan Nigeria struggle against military dictatorship, for social justice and for democratisation of Nigeria.

We sought and built alliances with other ethnic nationality formations across the country including the Odua People’s Congress [OPC], the Arewa Youth Forum, as well as Middle Belt and South East youth socio-cultural formations.

As part of our strategy of building a Pan Nigeria United front, we hosted a meeting of radical ethnic nationality movements, which led to the establishment of the Coalition for Self Determination [COSED].
We also sought to build alliances with the working class, in particular the organised workers of the Oil and Gas sector.

So why did the CHIKOKO Experiment fail? And why does a CHIKOKO Movement in the sense of a Pan Niger Delta Resistance Movement remain so sorely need at this point in time, 21 years after the launch of the last one?

We failed because the Nationalist wing of the CHIKOKO Movement triumphed over, defeated and muzzled out the Revolutionary social emancipative wing of the movement.

It is this failure to build a United Front based on the Class Solidarity of the Oppressed and Exploited, and the consequent triumph of competing Individual Ethnic Nationalisms based on the delusional National Unity of the oppressed and oppressor classes of each ethnic nationality, that has led us to the tragic outcomes of today.

And what is more? This resolution of the crisis cannot be achieved outside the transformation of the Neo-colonial and dependent character of the Nigerian state and socio-economic formation.

(Gaskia Is A 2019 Presidential Aspirant in Nigeria.)
Posted by PublicInformationProjects at 03:43