Special Report: Summary Of The Report On Army Python Dance Massacre 11 And Names Of The Perpetrators 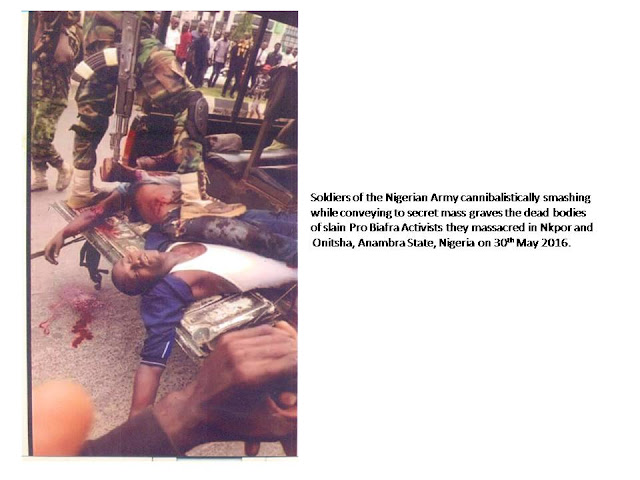 Int’l Society for Civil Liberties & the Rule of Law is concluding the investigative findings of its yearlong investigation into the Nigerian Army Python Dance massacre in Igbo Land (Southeast); principally targeted at Abia State especially the innocent citizens and residents of the State.


The so called “Army Python Dance 11” was carried out between 8th September and 14th October 2017 in Asa/Ogwe, Aba, Isiala-Ngwa and Umuahia (Afara-ukwu) areas of Abia State; leading to death of no fewer than 180 and 140 terminal injuries. Statistical breakdown of the killings are: (1) Afara-ukwu Palace massacre (105 deaths), Isiala-Ngwa (20 deaths) and Aba/Asa-Ogwe(55 deaths).

The increase in death toll recorded in Aba and Asa/Ogwe and environs was as a result of recent discovery of 38 more corpses inside Umu-Ura, Ogwe Village Forest, which increased the number from 25 earlier given to 55. Bulk of the 140 injuries arose from Afara-ukwu massacre of 14th September 2017 while the remaining was sustained in Isiala-Ngwa and Aba/Asa-Ogwe areas.  In all these, not even a single soldier lost his or her life and none was inflicted with gunshot injury of any kind; not even a hunter’s Dane gun injury.

We had on 4th June and 19th June 2018 released first and second part of the investigative findings contained in the following links:  http://www.intersociety-ng.org/component/k2/item/334-2018-06-04-10-54-33 and https://www.thenigerianvoice.com/news/267453/how-nigerian-army-massacred-150-pro-biafra-activists-hurri.html.

Also on 27th August 2018, we released the report of our recent investigation into the discovery of 38 lifeless and decomposed bodies found inside Ogwe-Ukwa West forest in Abia State. The circumstances of their killing were strongly linked to the same Army Python Dance murderous exercise of September 2017 in Abia State. Our said visit to Umu-Ura Village Forest in Ogwe Autonomous Community, Ukwa West Local Government Area of Abia State took place on Sunday, 19th August 2018. See the following link for full details: http://www.intersociety-ng.org/component/k2/item/370-inside-ogwe-ukwa-west-forest-where-defenseless-citizens-were-slaughtered-and-rested-in-pieces-during-army-python-dance-11-in-igbo-land
General Summary: The army massacre operation, code named “Nigerian Army Python Dance 11” was officially planned to be conducted between 15th September and 15th October 2017, but was commenced with troops deployment and confrontational patrols on 8th September 2017, leading to soldiers besieging Umuahia and environs and inflicting threats and fears on their civilian residents including first siege laid on Afara-ukwu and its Royal Palace on Sunday, 10th September 2017. The murderous Army Python Dance exercise ended on 14th October 2017.

The Army operation, turned into genocidal massacre of over 180 unarmed and defenseless citizens of Igbo Ethnic Nationality in three days of 12th, 13th and 14th September 2017, was directed by President Muhammadu Buhari after a meeting he held with the country’s Service Chiefs particularly the Nigerian Army’s Chief of Staff and the Chief of Defense Staff. The genocidal operation was coordinated by the Defense Headquarters and supervised and executed by the Chief of Army Staff.

This was followed up by President Muhammadu Buhari who on Sunday (blue law day), 17th September 2017 vindictively proclaimed same. A Judge was also procured on Wednesday, 20th September 2017, to issue an interim order upholding the presidential proclamation; all for the purpose of justifying the massacre and escaping culpability.

In the Army’s shooting and killing spree exercise that took place in four major locations in Abia State, scores of innocent and defenseless citizens were also made to disappear till date. Apart from the fact that bodies of most of those shot and killed by soldiers were taken to unknown locations till date, further findings revealed that they must have been buried shallowly in secret graveyards and most likely decimated with raw acid substances to erase traces; or dumped on earth surface inside isolated bushes, forests, ditches, deep gullies; or thrown off bridge inside rivers in dead of the night.

A clear case in point was the discovery in September 2017 and August 2018, respectively, of dozens of slain bodies of unarmed citizens inside Umuahia and Ogwe-Ukwa West forests where they were dumped in different locations; with strong circumstantial pieces of evidence linking them to their tribe and faith as well as event, scene, date and location of the Army Python Dance 11 exercise in Abia State.  In the case of discovery of bodies of eight slain Igbo citizens inside Umuahia Forest, for instance, they were instantly recognized by their colleagues as those met at the Palace of Eze Israel Okwu Kanu in Afara-ukwu near Umuahia on 14th September 2017. They must have been arrested alive and taken away by soldiers leading to their secret executions. The eight slain corpses were found barely seven days after the end of Army Python Dance 11 in Abia State.

In the case of 13 bodies of slain unarmed and defenseless pro Biafra activists found inside a burrow pit located along Aba-Port Harcourt Road in Abia State, it was also discovered by Amnesty Int’l researchers that some of them were before their executions tied with cut pieces of “Biafra flags”. The 13 corpses were discovered on 12th February 2016 by local whistle blowers and later investigated by Intersociety and Amnesty Int’l during their respective visits on 14th and 18th February 2016. They were shot, killed and dumped three days after the Aba National High School massacre of 9th February 2016 by soldiers of 144 Battalion, located in Asa Community, Ukwa West Local Government Area of Abia State.

We also make bold to say that all the no fewer than 180 killed and 140 terminally shot and injured in the Army Python Dance 11 in Abia State were innocent, unarmed, defenseless and law abiding citizens killed while going about their legitimate businesses at Asa and Isiala-Ngwa military checkpoints or outside the two major military checkpoints after they must have been arrested and taken into custody or at their places of work such as around their market stalls’ vicinities and food shops or in their dwelling houses during sleep or at meeting venues such as the solidarity rallies of 14th September 2017 at the Palace of Eze Israel Okwu Kalu in Afara-ukwu Kingdom, near Umuahia.

Saddening and shocking too is the fact that all the perpetrators (i.e. soldiers and their field and formation heads) involved or fingered in the massacre are still on the prowl with none arrested, tried or convicted till date. None of the wounded citizens was treated by Federal Government or Government of Abia State nor any form of compensation awarded to any of the slain victim’s families till date.

These, domestically, amount to multiple murders, attempted murders and torture (assault occasioning grievous bodily harm), punished feloniously and grievously. They are also fundamental breaches of the international human rights and humanitarian laws such as perpetration and perpetuation of ethno-religious cleansing, racial persecution, crimes against humanity and genocide; severely punishable under  the international criminal law including the Rome Statute of 1998, ratified or acceded to by Nigeria on 27th September 2001.

By vicarious liability or responsibility, it is concisely defined as the responsibility of the superiors for the acts of their subordinates or, the responsibility of any third party that had the "right, ability or duty to control the activities of a violator, but failed or declined to do same.  It is also a liability assigned to an employer or other principal for his agent’s or employee’s acts performed in the course of employment or other duty.

The Combatant soldiers who carried out the massacre are represented here by one of them identified via his service badge/identity on 14th September 2017 during the Army massacre at the Afara-ukwu Palace of Eze Israel Okwu Kalu as “Utsman Mustafa”; a Fulani-Hausa Muslim soldier caught opening fire, alongside others, at unarmed and innocent gatherers at the Afara-ukwu Palace amid shouting of “kill the pigs”! “Kill the pigs”!! “Kill the pigs”!!! This is translated to mean “kill any unarmed and defenseless citizen of Igbo extraction on sight and as presidentially directed or sanctioned”.