News Release: A Clarion Call For The Redemption & Salvation Of The Niger Delta 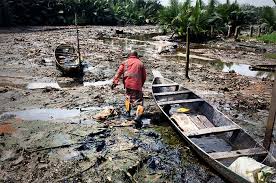 We wish to call the attention of all people of the Niger Delta, the international community and all men of goodwill, to the increasingly poor treatment that the Niger Delta and its people has been receiving from the government of President Muhammadu Buhari since his inauguration as President of the Federal Republic of Nigeria on May 29, 2015.

The past three years has been an intensely terrifying experience for the Niger Delta and its people.

For three whole years and counting, the government of General Muhammadu Buhari, a former dictator and now President of the Federal Republic of Nigeria, has deliberately launched a campaign to subdue, neglect and abandon the Niger Delta.

For three years and counting, there has been no new project and no new vision for the Niger Delta.

In fact, old projects such as the East West Road that was reaching completion stage has been recklessly abandoned.

Old ongoing programmes such as the Presidential Amnesty Programme has been largely neglected and abandoned.

In stead, resources from the Niger Delta are being channeled to fund interventionist programmes in North East Nigeria much to the chagrin to former militants and combatant elements in the Niger Delta.

More than $6.4 billion has been spent on intervention programmes in the North Eastern region of Nigeria.

A $2 billion Refinery project is being planned for the border town of Mashi in President Buhari’s home state of Katsina.

The refinery project will also include a multi billion dollar pipeline that will run from Katsina state to Niger Republic.

It does not matter that the old Kaduna refinery, which was built for billions of naira sourced from the Niger Delta has today failed.
Also a multi-billion dollar railway line is also being planned to run from Daura, President Buhari’s home town to Maradi in Niger State through the Nigerian – Nigerien border town of Jibia.

In 2016, $3.3bn was spent on intervention programmes in the North East.

In 2018, a similar amount has been quietly provided for in the 2018 budget. This does not include the recent declaration of a provision of $1bn for security purposes in the North East.

Yet, the same Federal Government continues to complain of lack of funds to prosecute the Clean Up of Ogoni land and complete the East West Road.

The Presidential Amnesty Programme, which was designed to cater for former agitating elements in the Niger Delta, has been completely abandoned with funding almost completely stopped.

Should our people therefore reject the Amnesty Programme and declare an end to the truce with the Nigerian state?

Boko Haram, the Islamic militant group that has killed more than 1000 Nigerian soldiers, razed down more than 40 communities in the North East region of Nigeria, abducted thousand of innocent women and children, yet they have become the new bride of the Buhari administration.
In spite of all the death, havoc and pain that Boko Haram have continued to unleash on Northern Nigeria, no member or leader of Boko Haram has been arrested, jailed or punished.

The Niger Delta Development Commission (NDDC), which is supposed to be an interventionist agency of the Federal Government in the Niger Delta, has become an avenue for slush funds to cater to the political needs of partisan politics rather than the needs of the people of the Niger Delta. Even the President's wife is a recipient of NDDC contracts.

The same Federal Government, which has abandoned the Amnesty Programme, recently awarded a multi billion-naira surveillance and protection contract (of Trans Forcados Pipeline TFP) to a company called Ocean Marine Solutions, owned by a friend of the Buhari Government, for the princely sum of (USD) $18.5 million (N6.66bn).

What if this pipeline is completely attacked and destroyed again?

We therefore call on all groups in the Niger Delta to rise up to the new challenge.

If the Presidential Amnesty Programme cannot be properly funded and catered for, then our people will reject it and all former combatants will renege on all existing agreements.

If the resources of the Niger Delta cannot be used to improve the quality of life of our people, then there will be no need for fight for peace in the Niger Delta.

It will amount to full blown debauchery if we sit back and allow the exploitation of the Niger Delta to continue while our people are given a cold shoulder by the Buhari government.

The time has come for all men of goodwill to return to the drawing board. It is time to redeem, rescue and salvage the Niger Delta.

We call on all former agitating groups in the Niger Delta to come together and chart a new way forward. Our silence must never be mistaken for cowardice. If we do not come together and act, we will all be consumed by the ignominy of the Buhari junta.

Godswill Tamuno
Spokesman,
Council For Mass Action In The Niger Delta
Posted by PublicInformationProjects at 06:54