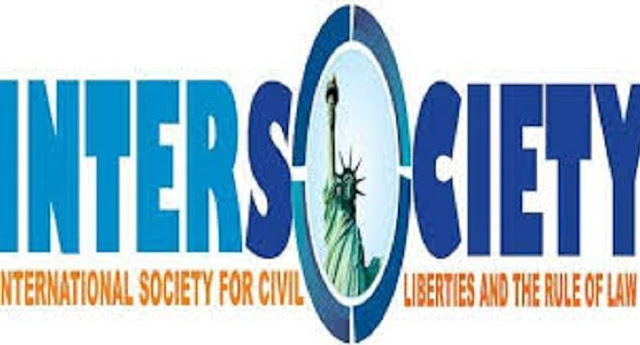 (How police, military and paramilitary formations pocketed N100b from roadblocks in 40 months: August 2015-Dec. 2018)
Nigeria’s Southeast Region has become the country’s headquarters of official highway robbery with largest number of security roadblocks in the country. This special report: welcome to Southeast Region-Nigeria’s headquarters of official highway robbery, is originally contained in Intersociety’s just released special report, titled: Under Buhari & Osinbajo: Many Have Gone & Crippled for Life in Eastern Nigeria; an 82-page research report attached with a 62-page photo album of victims of the military massacre operations; perpetrated between August 2015 and September 2017 or a period of two years.


The report: Southeast as Nigeria’s headquarters of official highway robbery also arises from a sub research done by Intersociety to ascertain the economic costs of the military massacre operations in Eastern Nigeria particularly in the Southeast and the Igbo Delta area of Delta State. The economic costs of the Nigerian military massacre operations in Eastern Nigeria was a sub-research done to ascertain the quantifiable costs  of the massacre operations and their negative effects on general economy and its activities in the Region, covering August 2015 to December 2018 or a period of 40 months.
The official highway robbery in Southeast Nigeria is targeted at exposing the rabid corruption going on in the country’s security forces particularly the Nigeria Police Force and the Nigerian Army as well as paramilitary formations stationed or drafted to the Southeast Roads and others linking the Region with the rest of the country. The research and its findings not only made mockery of the present central Government’s so called “anti corruption crusade” but also exposed the NPF under outgoing IGP Ibrahim Idris as the most corrupt security organization in Nigeria with chronically incurable corruption indices. Police corruption under the outgoing IGP; particularly roadblock and custody extortion or bribery has digitally tripled and risen to an apogee.
The outgoing IGP Idris, who has severally been accused of corruption and abuse of office, is one of  the loudest noise makers or paper noise makers against corruption in Nigeria, yet he is still seen by most Nigerians as a vicarious promoter of police corruption in the country. Apart from the outgoing IGP reportedly seeking for an illegal tenure extension from the country’s ruling cabal, having been due for legal retirement on 3rd January 2019; he had probated and reprobated on the issue of “police roadblocks in Nigeria” particularly in the Southeast Region.
Lately on 17th December 2018, he ordered for “immediate removal of all police roadblocks in Nigeria to facilitate free movement or flow of traffic during the Christmas season”. According to the Guardian Newspaper report of 17th December 2018, the IGP’s order was “with immediate effect”. The outgoing IGP also warned the newly recruited 6,000 police constables “against engaging in corruption and denting the image of the Nigeria Police Force, which has maintained a zero corruption stance”.
According to Punch newspaper report of 22nd December 2018, titled: no place for corruption, indolence in today’s Nigeria Police, IG warns new officers, the outgoing IGP’s warning was given to the newly recruited 6,000 police constables in Nigeria. He specifically gave the anti corruption “warning” in Ibadan, Oyo State in Southwest Nigeria during the passing out of 285 police constables June 2018 intakes that graduated from the Police Training College, Eleyele, Ibadan in Oyo State.
Contradictorily, Intersociety’s research findings contained in this special report have found the NPF under outgoing IGP Ibrahim Kpotum Idris as Nigeria’s den of official corruption, perpetrated in blue collar patterns. As a matter of fact, the Nigeria Police force is stinking faeces of corruption in the country. Apart from the textual content of this special report, it is also backed with 16 photos and two video clips. The photos were pictured or captured by Intersociety’s field under-covers and other concerned members of the public.
Attached below, with each graphically described, the 16 photos were taken in different locations within Southeast Region including in the cities of Onitsha and Aba with most of them taken in early December 2018. One of the two video clips involves a member of the Mobile Police Force (MPF) caught collecting and pocketing bribe from a commercial motorist on a Southeast Road while the second video involves a young male passenger travelling to Port Harcourt with AGOFERE Motors from the Southeast, shot on his leg and critically wounded by one of the mobile police personnel that mounted a roadblock along Aba-Port Harcourt Expressway in Rivers State.
The passenger was shot following arguments over N50 roadblock extortion. The police officers manning the roadblock including the one that shot and wounded the passenger later converged to take him to hospital. Such is a clear instance of what innocent passengers and commercial motorists and other road users pass through on daily basis in the hands of personnel of the NPF and other security personnel stationed on Southeast Roads. The 16 photos attached below involve police personnel, soldiers and civilian extortionists hired by soldiers; caught in the act or extorting money or collecting bribes from commercial motorists and other road users on Southeast Roads.
The compliance or otherwise of the outgoing IGP’s order for “the removal of all roadblocks across the country” particularly in the Southeast Region and roads linking the Region with the rest of the country was also monitored by Intersociety’s monitoring team and as expected, the IGP’s directive ended up as “a paper directive or order”.
Intersociety’s monitors had crisscrossed several Federal and State roads on Saturday, 22nd December and Sunday, 23rd December 2018 and found the IGP’s directive in gross breach. Roads visited included Atani-Ogwuikpere, Onitsha-Owerri and Asaba-Benin Federal Roads as well as Onitsha Niger Bridge end and Upper Iweka/Borrowmeo Roundabout end of the Onitsha-Enugu Expressway and couple of State roads. Calls made across Abia, Enugu, Ebonyi and Imo States clearly indicated same results or failed compliance with the outgoing IGP’s directive.

There shall be a presidential directive by the central Government of Retired Major Gen Muhammadu Buhari and Prof Yemi Osinbajo, which says it is fighting corruption, to the authorities of the Nigerian Military, the Nigeria Police Force and Paramilitary formations operating in the Southeast Region to return the whopping N100b criminal or extortion proceeds to coffers of the Governments of Anambra, Abia, Imo, Enugu and Ebonyi States.
·
In returning the criminal proceeds, the authorities of the Nigeria Police Force shall return a total of N78.02b extorted, the Nigerian Military N6b, the Nigerian Custom Service N11.5b and other Paramilitary formations (FRSC, NDLEA and NAFDAC) N4.5b, totalling N100b or $330m.

The present Buhari and Osinbajo Government shall issue further directive to the authorities of the Nigeria Police Force, the Nigerian Military and the affected Paramilitary formations to fish out the lists containing names of their officers and personnel posted to the Southeast Region and road routes linking it between August 2015 and December 2018.

The purpose of fishing out the names of officers and personnel of the affected security agencies shall be to have the N100b criminal proceeds deducted from their monetized remunerations including pensions of those already retired; in addition to commensurate deductions from the remunerations of the IGP or the immediate past IGP; the COAS, the Chief of Defense Staff, the Chief of Naval Staff and central heads of the affected Paramilitary formations (Custom, FRSC, NDLEA and NAFDAC).
·
The Governors of the Southeast and Delta State and other top political office holders and leaders from the Region are called upon to immediately and formidably rise to the occasion to effectively checkmate the militarization and northernization of top military, police and other criticalsecurity formations and command structures in Igbo Land.

For purpose of Xmas holiday and to ensure free flow of movement of persons and vehicular on Nigerian roads particularly in the Southeast Region, the authorities of the NPF and the Federal Government of Nigeria including the Nigerian Army and the Federal Road Safety Corps should discontinue at roadblocks indiscriminate impoundment of vehicles and checks on vehicle papers or particulars or traffic offenses as well as demand and collection of roadblock tolls or bribes. Vehicles can only be rarely stopped and checked on intelligence trail or surveillance.

Special joint security bodies shall be moved to strategic Nigerian roads and junctions/roundabouts particularly the Asaba and Onitsha axis of the Niger Bridge to free them of traffic congestions and other forms of human and motorized traffics.

For: Int’l Society for Civil Liberties & the Rule of Law-INTERSOCIETY