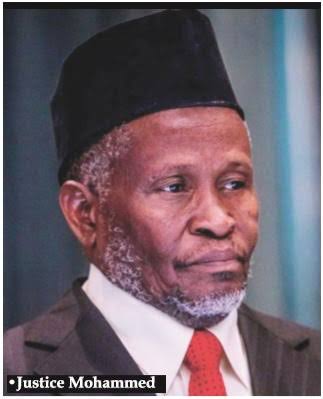 The African Centre for Media and Information Literacy (AFRICMIL), a non-governmental organization focused on good governance and the promotion of accountability has applied to the Code of conduct Bureau (CCB) for the asset declaration of the new Acting Chief Justice of Nigeria, Honourable Justice Ibrahim Tanko Mohammed JSC.


In a letter to the Chairman of the CCB and signed by its coordinator, Chido Onumah, AFRICMIL stated that in making the request, it relied on Paragraph 11, Part 1 of the Fifth Schedule to the 1999 Constitution as amended, which states that “Subject to the provisions of this Constitution, every public officer shall within three months of the coming into force of this Code of Conduct and immediately after taking office and thereafter – (a) at the end of the every four years; and (b) at the end of his term of office, submit to the Code of Conduct Bureau a written declaration of all his properties, assets, and liabilities and those of his unmarried children under the age of eighteen years.”

“Pursuant to the aforementioned provision of the 1999 constitution, as amended, and Section 1(1) of the Freedom of Information Act 2011 which states that, “Notwithstanding anything contained in any other Act, law or regulation, the right of any person to access and request information, whether or not contained in any written form, which is in the custody or possession of any public official, agency or institution howsoever described, is hereby established,” we humbly request to be allowed to inspect and obtain copies of the following documents, the letter noted:

In its concerted effort at advocating for increased transparent and accountable governance in Nigeria’s public service, AFRICMIL, on July 28, 2011, sent a Freedom of Information request to the CCB asking “to be allowed to inspect and obtain copies of the 2007 asset declaration of President Goodluck Ebele Jonathan; the asset declaration of President Goodluck Ebele Jonathan after the end of his tenure on May 28, 2011; and his asset declaration when he assumed office on May 29, 2011.”
On January 17, 2017, AFRICMIL in partnership with the Public and Private Development Centre (PPDC) submitted Freedom of Information requests to the Code of Conduct Bureau (CCB) for the declaration of assets of certain elected and appointed political office holders, including the current president and vice president, their immediate predecessors, past and current principal officers of the National Assembly, past and current governors of the 36 states of the country as well as past and current ministers since May 2011.

Although both organizations made these requests under the Freedom of Information Act, 2011, the CCB failed to respond to any of these requests within the time stipulated in the Act, thereby leading to the filing of cases before the Federal High Court requesting judicial action aimed at getting the Code of Conduct to do the needful, in relation to the aforementioned FoI requests of both institutions.

It is the sole responsibility of the Code of Conduct Bureau to ensure that all public officers declare their assets at the beginning and the end of their tenure in office. It is also their responsibility to ensure that the assets declared are verified to ensure compliance with the provisions of the law and also to establish possible cases of misconduct or corrupt enrichment, with a view to ensuring such culprits face the full wrath of the law.

The CCB has the constitutional responsibility to retain custody of such asset declaration forms and make them available and accessible for inspection by any citizen of Nigeria on such terms and conditions as the National Assembly may prescribe.

By enacting The Freedom of Information Act, 2011, the 7th National Assembly gave effect to the constitutionally guaranteed right of the public to access public documents held by public institutions and relevant private entities in Nigeria and this includes asset declaration forms of public officials, which are public documents within the meaning of the FoI Act, 2011.

On April 3, 2017, Justice Abdu Kafarati, sitting in Court 2, Federal High Court, Abuja granted the two civil society organizations leave to bring substantive suits against the Code of Conduct Bureau (CCB). The grant of leave followed the hearing of the Motion Ex-parte filed by AFRICMIL and PPDC on the failure of the CCB to provide information on the asset declaration of elected and appointed office holders in the Jonathan and Buhari administrations under the Freedom of Information Act 2011.
Justice Kafarati eventually gave judgement declining the reliefs sought by the applicants in the respective cases. AFRICMIL and PPDC appealed the judgement and the cases have been slated for hearing at the Court of Appeal on February 20 and 21, 2019.
Chido Onumah
Coordinator
Posted by PublicInformationProjects at 09:01