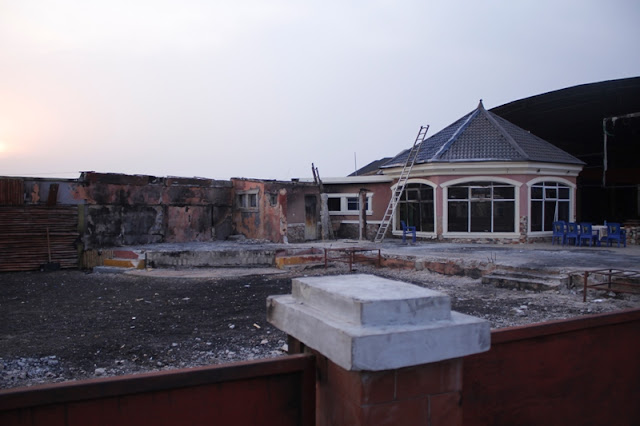 Last week, one of the biggest entertainment hangout centers in the Southeast, and Owerri in general, Ibari Ogwa Village located along Port Harcourt road, was gutted by fire.

The fire incident which was traced from a nearby bush that some smokers allegedly set ablaze with cigarette, escalated through wind that carried particles of the burnt weed to the rooftop of Ibari Ogwa’s local bar occurred last week.

Earlier before the official press release, the CEO, Mr. Chukwudi Ofoha who reacted through his social media handle recalled that, “While in a meeting where we were discussing on how the Valentine show would be, you know how it goes every February 14th at Ibari Ogwa, so I decided to take a quick nap before heading out for some business appointments. Later I came out and saw a bush on fire, like a few blocks away.

“I asked to verify what caused the fire; they said some people were trying to clear a bush. Like I knew what was going to happen, I quickly told them to go control the fire but before I could say the next word, the harmattan wind had already pulled some dry leaves up, next thing I saw, my bush bar, the newly built ikwokrikwo village and bar was on fire. Thank God no life was lost even though goods and properties worth One hundred and twenty million naira were lost. But in all, we are still standing strong and still open for business.

Calling on the security agencies to join hands together with other well-meaning Nigerians to control the incessant and illegal burning of bushes, he stressed that he might be a victim today, and it could be another person’s own tomorrow.

“I am calling on the Imo Commissioner of Police, alongside other security agencies in this State to come out and help good spirited Nigerians in curbing the illegal burning of bushes. Like we have around the quarter where the fire escalated from, you will see shanty houses where people stay and commit all kinds of crime.

“We need the Police to get involved into this matter. They should investigate by finding out the kind of activity that is carried out there. At night, I get complaints from people who lose their valuable properties. You never can tell, maybe that place serves as hideout to some notorious criminals and kidnappers. I sincerely want the security agencies to get to work,” he said.

Notwithstanding the situation that made them to lose millions of naira worth of goods, Mr. Ofoha assured that they are not deterred offering quality entertainment to their valued customers, as they are still open for business.

According to him, “We are very much open for business. As we speak, there is a great plan to make our Valentine’s Day event one of the biggest you can ever imagine. As you can see, customers are going in and coming out with great satisfaction. The brand Ibari Ogwa has come to stay.

“To our valued customers, we will continue to count on your prayers, support and patronage as we strive to surmount this challenging phase, which already has been defeated. We are still open for business at our usual entertainment center. We assure you of our irrevocable commitment to the satisfaction of our valued customers,” he enthused.
Posted by PublicInformationProjects at 08:49