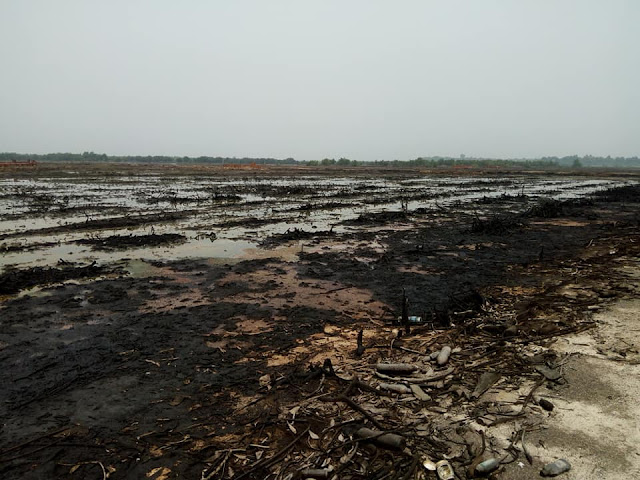 A new level of hydrocarbon pollution of Ogoni environment has been discovered as exposed by the ongoing construction of the N120.6billion Bodo-Bonny Road.  The 34-kilometer long road is being constructed by Julius Berger Plc through the swampy and muddy creeks of Bodo community in Gokana Local Government Area to Grand Bonny Kingdom in Bonny Local Government area of Rivers State.

A visit to the Bodo community axis of the project site on Thursday, January 10 by a team comprising of environmental justice campaigners, environment monitors, journalists and volunteers exposed a stretch of vast expanse of massively hydrocarbon pollution devastated areas covering miles and miles away.


The team which was led by Fyneface Dumnamene Fyneface, Ogoni/Niger Delta Environmental Justice Campaigner said the team drove over 7km from Patrick Waterfront where Ogoni cleanup was flagged-off in 2016 up to kilometers 7+900 on the new Bodo-Bonny road where sites of pollution could be seen many more kilometers away. His words “As we drove 7+900KMs (as seen written at the point we stopped) from Patrick Waterfront where Ogoni/Niger Cleanup was flagged-off on June 2, 2016 towards Bonny Island where the Bodo-Bonny road is being constructed to, we were greeted by a new sight of pollution and devastated environment that I never knew existed in Ogoniland”. Fyneface said.

Mr. Fyneface who said the main purpose of the trip as a development concerned citizen was to ascertain whether work was actually ongoing on the Bodo-Bonny road as stated by President Muhammadu Buhari during the presentation of the 2019 budget at the National Assembly on December 19, 2018 but was booed by some lawmakers including those from Rivers State told journalists that the visit did not only reveal that work is actually ongoing on the project as the President said but that the ongoing construction exposes a new level of pollution that may not have been captured or reported in the United Nations Environment Programme (UNEP) Report on Ogoniland released on August 4, 2011. “I was shocked to see this extent of pollution in that part of Ogoni alone. I do not think that this level of pollution, stretching over 8kms from flag-off point and continuing as far as eyes can see towards Bonny Island was captured in the UNEP report on Ogoniland”. Fyneface said.

“There is need to re-assess these new level of hydrocarbon pollution being revealed by ongoing construction of Bodo-Bonny road while the cleanup of other impacted sites commences. With what I saw today, Ogoniland cannot be cleaned up without simultaneously cleaning the environment in neighbouring communities like Ogu/Bolo, Andoni, Opobo, Okrika, Bonny, etc. that share common water boundaries. I use this opportunity to invite environmental justice activists, campaigners, environmental organizations, institutions and media organizations locally and globally to take advantage of the road being constructed to Bonny through Bodo creeks to visit the area and experience the new level of pollution I saw today. Such visits will enhance our collaboration for a strong campaign to stop re-pollution in Ogoniland and the Niger Delta region as cleanup gets on the way”. Fyneface said.

It would be recalled that Shell Petroleum Development Company of Nigeria (SPDC) accepted responsibility for multiple oil spills in the area upto 2009 and paid 55million British Pounds to the Bodo community in 2015 as part of out of court settlement following a case instituted by the community against it over the spills in a London Court.

Mr. Fyneface reiterate call on the Hydrocarbon Pollution Remediation Project (HYPREP) to commence the actual cleanup of Ogoni environment without further delay while the Federal Government, SPDC, etc. should ensure the availability and adequate funding of the project.
Posted by PublicInformationProjects at 09:53