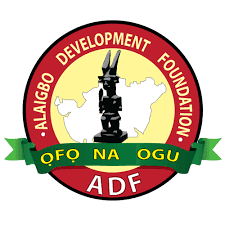 After a careful study and thorough scrutiny of the historic speech made by Oba Adeyeye Enitan Ogunwusi, the Ooni of Ife, during the recent Aje Festival at Ile  Ife, the Alaigbo Development Foundation (ADF) wishes to make the following observations:-

That the historic speech by the Ooni which emphasized the aboriginality of Igbo civilization in Oduduwa history should be seen as a welcome development in the restoration of positive relationship between the Igbo and Yoruba.


The information provided by the Ooni of Ife was also reflected in the book, titled, The Cradle of a Race: Ife from the beginning to 1980. The book was written by many Yoruba intellectuals and edited by Prof. I. A. Akinjogbin.

We urge the Igbo nation, especially the Paramount Traditional Rulers and Spiritual Fathers in Alaigbo to reciprocate the goodwill demonstrated by the Ooni of   Ife to further improve and consolidate Igbo-Yoruba rapprochement and solidarity.

Ndigbo and the Yoruba should always emphasize those cultural and historical links as well as socio-political and economic issues which unite them, rather than those which divide them.

Let us recall that Ndigbo, under the leadership of former Premier of the Eastern Region, Dr. Michael Okpara, went a long way to heal the wounds inflicted on IgboYoruba relationship during the Azikiwe  Awolowo era by the care his government took of Pa Obafemi Awolowo and his wife, Hannah, while Awo was in Calabar Prison.

We equally recall with pride how Dr Okpara led a contingent of Ndigbo to identify with their Yoruba allies led by Adegbenro, during the operation Wetie, when the Yoruba nation was fighting for political survival from foreign invaders in 1965.

We urge Igbo Traditional Leaders to further reciprocate the goodwill of the Ooni of Ife, by agreeing to participate in the next Aje Festival in Ile-Ife in 2020, as suggested by the Ooni to further consolidate the Igbo-Yoruba solidarity.

The consolidation of Igbo-Yoruba solidarity and socio-cultural relationship would lay a solid foundation for the inevitable broader solidarity and cooperation among them and other regions in the Federal Republic of Nigeria; we mean those regions which are earnestly in search of political and economic emancipation and self-determination.