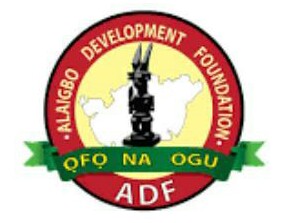 May 30 is a Day that occupies such a nodal point in the history of Alaigbo and her neighbours. It should be hoisted as A DAY OF REMEMBRANCE of the millions who died that we may be from; yes, who died in the cause of our struggle for self-determination and survival as a people.

Alaigbo Development Foundation (ADF is aware that several Igbo organizations have often scheduled activities to mark May 30 as a Memorial Day in Igbo history. May 30 marks the day Biafra was declared and no patriotic Igbo son or daughter can pretend that Biafra is not part of the history and indeed the major water-shade in the history of the Igbo nation and the entire Igbo race and their Neighbors.


If anyone is in doubt let him recall what happened on May 30, 2017 and 2018, when our sons and daughters under the aegis of IPOB declared a SIT-AT-HOME, while MASSOB and other organisations organised various activities  to commemorate that day as a historic day in the life of Ndigbo, and as well as their neighbours.

The total compliance of that call throughout the length and breadth of Alaigbo was not because IPOB or MASSB had become their supreme authority. No! That call evoked intense yearning in the innermost recesses of the heart and mind of our people. And, therefore, whoever provoked the observance was welcome.

BIAFRA evokes intense longing for freedom for our people. When someone asserted recently that Biafra is of the mind, he was right in this sense.  But Biafra is more than a state of the mind. It is also a material force that moves our people.

Why will Biafra not be in their heart and mind; why will Biafra not symbolise their longing for freedom when their predicament since the Amalgamation in 1904 up to Biafra on May 30 1967and since Biafra has been a continuous state of estrangement, brutal and punitive measures against their economic, political and physical survival?

MAY 30 IS WORTHY TO BE OBSERVED BY THE IGBO RACE AS A REMEMEBERANCE DAY IN THEIR HISTORY!

Ndigbo don’t need any power to decree for or against it. What is needed is the law of their heart – BIAFRA AS A SYMBOL OF FREEDOM.
THERE WAS ONCE AN IGBO DAY!!!

Igbo Day was established by our forebears and was meant to be celebrated world-wide as one of the symbols of Igbo National Solidarity and Unity. Under the leadership of Igbo State Union, Igbo National Day was celebrated annually during the first week of December. However, the authority that supervised it was THE IGBO STATE UNION.

The military banned the Union after the Biafra war. After the war, one of our ancestors, the venerable Dr Akanu Ibiam and others created OHANAEZE NDIGBO, though under certain controversial political environment. For example, Chief Iheonunaka Mbakwe, Chief Jim Nwobodo and others were not active in the Ohanaeze describing it as an outfit of the National Party of Nigeria (NPN).  The later was seen at that time as contesting for the control of Igbo political and cultural space against the NPP which had captured the heart and soul of Ndigbo.

In 2000, Ohanaeze Ndigbo reinstituted Igbo Day for May 29, but due to a controversy arising from the declaration of May 29 as Democracy Day in Nigeria by the Government of Chief Olusegun Obasanjo, Igbo Day was shifted to September 29.

This action by Ohanaeze was, no doubt, an act of self-denial, reminiscent of defeated people noted for their lack of self-assertion and self-confidence.

It is to be noted in the first place, reflecting the same spirit of self-denial, the choice of May 29, was to run away from May 30, the day Biafra was declared. And when those leaders found out that May 29 had been taken away by the Obasanjo regime as Democracy Day, our leaders chickened out.

But instead of landing where they should logically land, namely, May 30, they landed on September 29 which turns out to be dead on arrival. Dead on arrival because except the speeches and modicum of cultural activities in the State capital where the event is held, not much is heard of IGBO DAY elsewhere, and what is more, because it virtually conflicts with Nigeria’s Independence celebrations. The closeness of September 29 to the Nigerian National Day – October1, – prevents many Igbo citizens, especially those in Government from effective participation in the activities of the Igbo National Day.

Today, there is a historically urgent need, in the search of the soul of the Igbo Nation to consider an alternative and historically most fitting day for IGBO DAY. We must adopt a day which strikes the innermost recesses of the Igbo soul. And that Day is May 30.

Events in Alaigbo on May 30, 2017 and 2018, clearly show that May 30 has become an official Igbo Remembrance Day not only in Alaigbo but throughout the entire world where Igbo citizens live. \

In 2018 the BBC, Vanguard Newspaper and other notable media organs report of high-level compliance by Umuigbo to the call for SIT-AT-HOME by the Indigenous Peoples of Biafra (IPOB) and the Movement for the Actualization of the Sovereign State of Biafra (MASSOB).

From London to Johannesburg, to several cities in Europe, Asia, America and Canada, the story was the same with various activities organized by Umuigbo and their friends to mark the occasion.
On May 30, 2017, the entire Alaigbo was shut down; markets, shops, schools and offices closed while streets were deserted to mark the Remembrance Day.

The Alaigbo Development Foundation (ADF), therefore, propose to our people, Igbo leaders, the Governments in the seven Igbo-Speaking States, all pan-Igbo organizations including Ohanaeze Ndigbo that MAY 30 every year should be observed as IGBO REMEMBERANCE DAY and ipso facto as BIAFRA DAY.

It is a Day to remember our history, to review our successes and failures as a people, to remember those who have died fighting for the Igbo cause and also reflect on our future.

However, whether May 30 is declared as IGBO REMEMBRANCE DAY, IGBO NATIONAL DAY or not, most sons and daughters of the Igbo Race shall continue to observe MAY 30 in one form or the other as A SPECIAL DAY OF REMEMBERANCE IN IGBO HISTORY.

Compare our case with the Yoruba nation, a self-confident nation.
June 12 is the day Abiola’s electoral victory was annulled by the Ibrahim Babangida Government. For the Yoruba nation regarded that action as an afront on the Yoruba race, implying that they were second class citizens not fit to occupy the Presidency of Nigeria. June 12 has virtually become their main national day- called DEMOCRACY DAY. Several Yoruba Sates including Osu, Ogun and Ondo had declared June 12 as a Public Holiday within the Yoruba nation, Self-confident people. See?

They had fought to make it a federal event. Their legislators, political leaders and friends fought hard to get the Federal Government and the National Assembly to declare June 12 as the real DEMOCRACY DAY in Nigeria. Within the Yoruba nation, June 12 was celebrated as their own DEMOCRACY DAY

Today, the Government of General Buhari has finally adopted June 12 as Democracy Day in Nigeria. However. Ndigbo do not bother whether the Nigerian Federal Government allies itself or not with the yearning of the Igbo for May 30 as their National Day, otherwise called BIAFTA DAY. It is a call made entirely in the interest of our Regional Unity and Solidarity.
Ndigbo should adopt MAY 30 as our IGBO REMEMBRANCE DAY otherwise called BIAFRA DAY.

The mode of celebration will certainly be determined accordingly. Actvities such as free Sit-At-Home, holiday for workers, Public Lectures and Symposia, Rallies, Wearing of Black or Red Bands, etc, can be defined as forms of the Remembrance Day celebrations.