News Release: Igbo Group Condemns And Opposes The Reckless Provocative Call By Miyetti Allah For The Establishment Of Fulani Vigilante Outfits In The South East 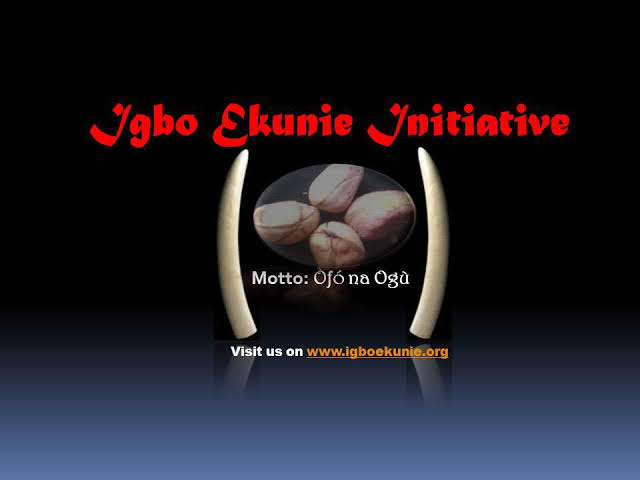 The attention of Igbo Ekunie Initiative, a coalition of professionals in Nigeria and the Diaspora has been drawn to the recent call by Miyetti Allah Cattle Breeders Association of Nigeria (MACBAN) for the establishment of Fulani Vigilante's outfit in the South East of Nigeria

We condemn and denounce this reckless and provocative macabre call by Miyetti Allah in the strongest possible terms and, hereby sound very grave warning to all in Nigeria that any attempt to export the infamously vicious and violent Fulani Militia into any part of Igboland shall be fiercely resisted both from the high and low quarters as we affirm our commitment to vigorously and contumaciously oppose the establishment of the Fulani Vigilante in any form whatsoever anywhere in the South-East.


We maintain that the Miyetti Allah’s call for the establishment of Fulani Vigilante in the South-East is absolutely uncalled for and worrisome especially when taken into perspective that States like Anambra, Enugu, Ebonyi and Abia and Imo are among the most peaceful areas of the country, and there is absolutely no threat in any form to the Fulani people living in the South-East nor to their business interests that should warrant the establishment of a Fulani defence corp.

We maintain that we already have effective local vigilante services all over the South-East to augment the services of the secular security services and there is absolutely no need to pollute the already harmonious security relationship by adding the Fulani Militia into the equation.

One would have expected that the Miyetti Allah should devote its energy and resources to assisting to address the reckless and cruel bloodletting all over Northern Nigeria by the Fulani Herdsmen whose genocidal crimes of huge proportions have so far baffled and overwhelmed the Inspector General in particular and indeed the entire security apparatchiks in Nigeria. So far, thousands of innocent and defenceless Nigerians have been massacred and hacked to death by the duo of terrorist Fulani Herdsmen and Boko Haram insurgents all over the North-East and North-Central, particularly in the president Buhari’s home state of Katsina where the so-called bandits have rendered the state ungovernable. The situation is the same in Kaduna and indeed in Borno state where both the Chief of Army Staff Lt Gen Yusuf Buratai and the National Security Adviser Monguno hails from. Why has the Miyetti Allah not deemed it fit to establish their Fulani Vigilante in these areas that are manifestly prone to cattle rustling?

In the above instances, the Nigerian Security services have remained grossly incompetent and incapable; engaging in shadow chasing and beating about the bush.  In some cases, the Military and the Police actually sided with and spoke in favour of the killers!

We take note the unfortunate news playing out all over the country especially in the South-East detailing the tales of woe of how Fulani Herdsmen ransack and ravage farmlands, rape innocent women and slaughter defenceless men. As at today the rampaging Fulani Herdsmen technically enjoy immunity from arrest and prosecution and are rather raided by the nation’s security forces to wreak havoc and visit mayhem on the citizenry with impunity.  They freely display AK47 rifles not permitted to be used by civilians. Allowing them to form a Fulani vigilante outfit will turn them into an army of occupation and invite unavoidable confrontations with the Igbo Youths who have been traumatized and emasculated by the outrageous policies of the Buhari regime.

We hereby reiterate our demand that the federal government and indeed the security forces should without further delay arrest and prosecute the rampaging vicious Fulani Herdsmen and Boko Haram as well as others who are in possession of illicit prohibited firearms such as AK-47 assault rifles and their likes; machine guns, IEDs, rockets, mortars and anti-personnel and anti-tank landmines as well as indict and convict their sponsors in accordance with the law of the land.

We note the high level of ethnic mistrust; distrust and suspicion amongst Nigerians which have worsened under the current Buhari government and maintain that exporting Fulani militia to the South East will lead to avoidable confrontation and escalate to an alarming and genocidal crescendo thus aggravating the already tense security situation all over the country.

Finally, we admonish all the Governors, National Assembly members, State Assembly members and indeed all the other politicians and security personnel from the South East to be alive to their responsibilities in accordance to their respective oath of office by taking proactive and strategic action to nip this infamous call by Miyetti Allah in the bud. Where they fail in their duties, we shall not and when the time of reckoning comes, every defaulter will be brought to book.